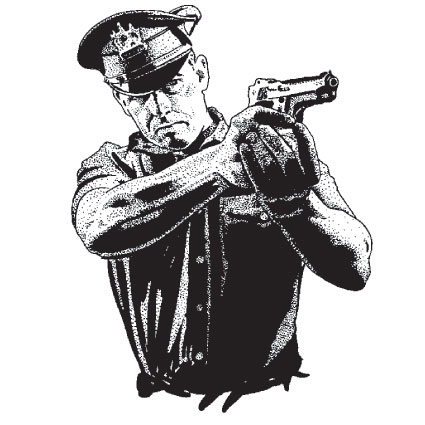 Back a few years ago I was involved in an incident that, through a combination of unlucky circumstances and my own stupidity, could have easily cost me my life. At the time I worked at one of the larger sheriff’s departments in the state and was assigned to a uniformed investigative support unit. After pulling some major overtime the night before, I was heading into the office around 07:30 hours. I had worked nearly 16 hours on my previous shift and I had only gotten about 4 hours of sleep before heading back to the job.

I was traveling in a marked SUV-type vehicle on the interstate heading toward the county seat during the morning rush hour. Traffic was stop-and-go on the four lanes heading into town. I was in the far right lane when I noticed in my rearview mirror that a vehicle about a quarter of a mile behind me was passing cars on the right shoulder of the highway. The car’s flashers were on and I made my first mistake by making the assumption that one of the occupants might have a medical emergency of some sort.

At that time I had about 15 years experience as a law enforcement officer. On at least a dozen occasions over those years I had encountered speeding motorists running their flashers. In every such case the motorists were either transporting someone to the emergency room or heading to the hospital to be with a loved one that had already been admitted.

Typically, when I stopped vehicles with someone needing treatment I would request that EMS respond to transport and then render first aid to the patient. I happen to be cross-trained as a medical responder and my support vehicle was equipped with a medic bag, defibrillator and oxygen. In cases where the driver was going to see someone already at the hospital I would tactfully explain to them that they shouldn’t endanger their own lives and the lives of other motorists, before sending them on their way.

As the vehicle got closer to my location the traffic started to move again. The vehicle merged back onto the roadway and then into the lane next to me. As the car pulled along beside me I saw that two males occupied it. The driver appeared to be in his mid-40s, while the passenger in the front passenger seat looked to be in his 20s. The passenger was slumped down in the seat and was staring forward with a blank expression on his face. The driver, who by this time was looking over at me, was crying and shaking his head.

These observations, in my mind, reinforced my earlier assumption that the passenger must be suffering from a medical condition. I motioned with my hand for the driver to pull over to the right shoulder. The driver followed my direction as I slowed down to let him merge over in front of my vehicle. I activated my blue lights, as traffic was still bumper-to-bumper, and began to pull off of the road. I contacted dispatch and advised them that I was stopping to assist a motorist with a possible medical emergency. Following procedure I also gave dispatch my location, vehicle license tag number, vehicle description and description of the two occupants.

Much to my annoyance, the driver of the vehicle came to a stop barely clear of the lane of travel. The tires of the car were on the white line and I could visualize the driver stepping out and being splattered by a passing truck. I pulled well clear of the road, about 20 feet from the white line, and stopped about one car length to the rear of the other vehicle. I got on my public address system and instructed the driver to pull down away from the road. Instead of doing that, the driver began to open his door and exit the vehicle. I became agitated and immediately exited my vehicle with the intent of telling the driver to return to his car and pull well clear of the road.

By this time the driver had stood up and was walking on the road toward the back of his car as I was walking toward the rear bumper of his car. Only the driver’s head and shoulders were visible to me until he reached the back of the car. As the rest of his body came into view I noticed, very much to my surprise, that he was holding an M1911 pistol in his right hand with the hammer cocked! The driver that I assumed was someone rushing a person in need to the hospital was now an armed suspect!

We both stopped walking and now stood facing each other about 10 feet apart. As the adrenaline quickly freed me from my fatigue-induced daze I began to mentally evaluate my situation. Why is he crying? Has he shot the passenger or someone else? The suspect has a weapon in hand and can engage me quickly. If I attempt to draw my weapon from my holster I will most likely be shot before I break leather. Even if I draw down on him and get off a shot I will be shooting into 8 lanes of a highway crowded with bumper-to-bumper traffic. My only cover is 10 feet behind me and if I run I will probably get shot in the back.

All of this happened in a split second from the time I noticed the suspect was armed. I immediately held my hand up as if stopping traffic and yelled, “Stop, manos arriba.” About a year before, in response to a massive influx of Spanish speaking immigrants, the department had held a few training classes during which officers were taught a few key law enforcement phrases in Spanish. As it turned out the only phrase I had remembered was manos arriba, or hands up. I was surprised a second time when the suspect did in fact raise his hands over his head and drop to his knees.

The suspect still held the pistol in his right hand above his head; if only I had learned how to say put down the gun in Spanish! The suspect was still crying and began shaking his head as he mumbled something in Spanish. I began to slowly approach him and continued yelling, “Manos arriba!” By this time I was worried about the passenger. Was he a victim or another armed suspect that might jump out and blow me away at any second? As I approached the suspect, vehicles were passing by only inches behind him. The chance of some distracted motorist plowing into us both was another real danger.

As I got to arm’s length from the suspect I said in a gentle voice, “It is going to be okay, give me the gun.” As I reached for his pistol, the suspect shouted something in Spanish and suddenly jumped to his feet. I began back peddling and ran for the cover of my vehicle while clawing for my service pistol. Fortunately for me the suspect also ran and jumped into his car. Horns blared and a cloud of grass and dirt flew into the air as the suspect sped away, narrowly avoiding a collision with a passing car.

I re-holstered my weapon and jumped into my vehicle. I contacted dispatch and used the emergency code for officer needs assistance. I then relayed that I was in pursuit of a vehicle driven by an armed suspect and there was a passenger in the vehicle that might be a second suspect or possible hostage. Even with my lights and siren going I had to travel nearly half a mile on the side of the road before a motorist finally yielded and let me merge on to the roadway.

Although the suspect’s sedan had a speed advantage over my SUV I soon caught up because of the heavy traffic. However, as we passed the next highway interchange near downtown, the traffic finally started to thin out. I continued to relay my location as the suspect slowly pulled ahead of me. Then I saw a state trooper pull onto the highway ahead, then two county cars and a police unit from the city. Much to my relief about 12 additional units from the sheriff’s department, city police, and highway patrol joined into the pursuit.

Three units in the rear blocked oncoming traffic while two other units raced ahead of the suspect vehicle to warn motorists ahead. About 20 minutes into the chase the suspect suddenly came to a stop. After a brief standoff the suspect finally exited the vehicle. He was unarmed this time and raised his hands above his head before being taken into custody without further incident. The passenger, who in fact turned out to be a hostage, was also taken into custody as a precaution. The suspect’s M1911 was recovered from the front floorboard and a semi-automatic rifle was found in the back seat. Both were loaded with rounds in the chamber. Both were also entered into NCIC as being stolen.

Neither the suspect nor the hostage spoke English, so a Special Agent with Immigration and Customs Enforcement assisted with interviewing them both. It turns out that the suspect was the hostage’s uncle. Both of them were illegal immigrants from Mexico and had been living in a town about 100 miles east of the county where I worked. The hostage said that his uncle appeared at his house at about 04:30 hours and woke him up in his bedroom armed with the pistol. His uncle then announced that they were going home to Mexico and threatened to shoot him if he didn’t cooperate. The nephew said that his uncle had no history of mental illness before, but had apparently been very stressed over family problems back home in Mexico and was having a mental breakdown. The suspect was later found guilty of a variety of felonies, but was deported instead of serving a state prison sentence.

By making assumptions and using poor traffic stop tactics I had put myself in a very dangerous situation. Had I not used an assertive and commanding voice, and not known that one Spanish phrase I really believe that the suspect might have shot me. So take my advice. Never assume anything, especially when it comes to encounters with the public on the highway. If possible, always position your vehicle to allow it to be quickly used for cover and concealment on a traffic stop. Finally, learn and practice using important law enforcement phrases in Spanish and/or other languages spoken by people in the region you work. It might save your life.
— RS, NC

A Pair of Metal Detectors

Back a few years ago I was involved in an incident that, through a…