Every year, Americans honor their loved ones whose time was cut short defending our liberty, our freedoms and our nation. In the final peace they will ever know, fathers and sons, brothers and sisters, wives and husbands lay at attention under a fresh sea of solemnly placed flags as we all pause to express our gratitude. With moist eyes and low voices, we say thank you for keeping us safe for the ultimate sacrifice that took them and left only their buddies and loved ones to remember their passing. However, far from dying in vain, the men and women we honor left us the greatest nation on the earth and a challenge to keep it strong and free. We at Tactical-Life thank those men and women who replaced hopelessness with hope, war with peace, and stopped tyranny in exchange for their lives. The national treasures that kept us strong and free as they fought and died in places both known and unknown.

Started by ex-slaves to honor unknown Union dead after the Civil War and first called Decoration Day, and now Memorial Day, it is this nation’s yearly honoring of the Americans lost in our wars and conflicts. It is a celebration of honor and giving some time to stop and pause to reflect that our freedom did not come by discussion or politics but by tough Americans fighting and dying for us here and abroad. We stop every year to put down our small worries as we approach great men and women to acknowledge what they did for us. Regardless if they left us during a charge at Bull Run, moving through Belleau Woods, in the cold at Bastogne, on a ship off Okinawa, during the trek from the Chosin Reservoir, the black muck of the Mekong, the flaming skies of Hanoi or the high, rocky desert of Afghanistan, they died as heroes. Every single one.

From Gettysburg to Arlington, Normandy to Iwo Jima, and from hometown cemeteries and small-town amphitheatres across America, hundreds of thousands of stars and stripes—each representing our nation’s loss—will stand tall for those who can’t. The flags will ripple in the sun and feel the breeze that our fallen soldiers, Marines, sailors and flyers cannot. We are lessened by their absence but sadly enriched by their passing. We honor their spirit and dedication on this great day, as well as the families that they left behind, some of whom they never knew. The great grandsons and daughters who pause and listen to the telling of the stories of the names etched in granite before them. The kids who have never known hunger, thirst or war because of those names. The kids who hopefully become greater and wiser, knowing that the names etched in granite sacrificed all for them. 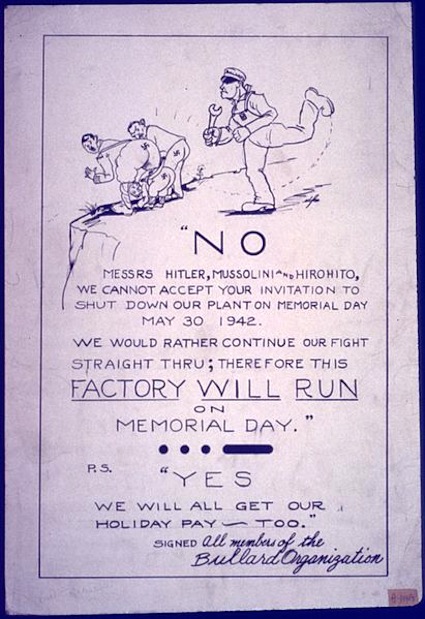 We also honor the friends and buddies that made it home alive but lost their youth, their innocence and some of their friends on a dusty battlefield, fierce jungle or in a fiery inferno. The men and women who stand alone over a grave, a marker or part of the Wall and quietly say hello and finally bid goodbye in a private ceremony shared only by two and tears for one. The one that made it and one that didn’t.
We thank you all. God bless you and God bless America.