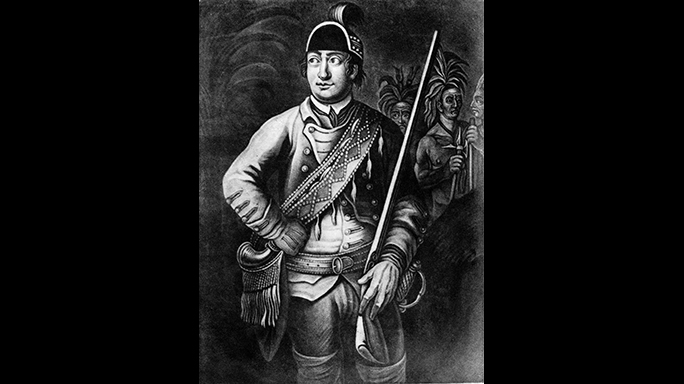 Luckily for Robert Rogers, the French and Indian War — pitting the British against the French and their Native American allies — engulfed the colonies in 1755 just as Rogers was about to go on trial for counterfeiting.

Rogers, then 24, had already seen military action in skirmishes during King George’s War, so charges were dismissed against the veteran frontiersman in exchange for his agreeing to fight for the British.

Rogers arrived in Portsmouth, N.H., and put together a small army, which was dubbed Roberts’ Rangers by locals, who were happy to have a militia on hand to protect them against potential attacks by Native Americans. Unfortunately for them, Rogers and his men were not in New Hampshire long. They soon departed for the region around Lake George and Lake Champlain in New York, where they began raiding French towns and military strongholds.

Traveling on snowshoes over rough, inhospitable land, the Rangers were unique among British forces for their ability to mimic the tactics of Native American fighters — methods considered revolutionary at the time.

Roberts’ Rangers fought in the first and second Battle on Snowshoes, then launched an expedition far behind enemy lines near Quebec to destroy the Algonquian-speaking Abenaki, who had been staging raids against British settlements in New England. Rogers’ defeat of the Abenaki eased the fears of settlers in New England and helped change the course of the war.

But Rogers’ legacy extends far beyond a few backwoods battles in the 1750s. The U.S. Army Rangers of today claim Rogers as inspiration for the unit’s creation, and the Rules of Ranging that Rogers wrote as a blueprint for conducting guerrilla warfare still serves as a guide for Ranger activities.

Robert Rogers also created a separate document called Standing Orders, a 20-item list that today follows the Ranger Creed in the Ranger Handbook. Among its pearls of wisdom:

Rule No. 1: Don’t forget anything.

Rule No. 20: Don’t use your musket if you can kill ’em with your hatchet.

Appropriately titled 'Soldiers,' the new video series from the US Army was created to...