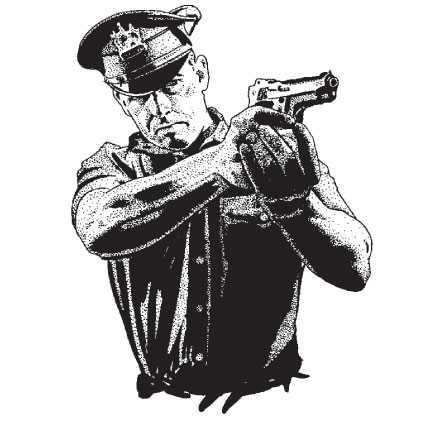 The unit I am a part of is called upon to deal with violent and, often enough, armed groups of people on a regular basis. For the record, we are not SWAT or SRT, we have not been granted any of the “specialized” training that comes with being a part of such “elite” teams. In order to overcome such insufficient training we are forced to obtain the training elsewhere, usually through organizations such as IDPA, workshops, and other proactive simulated stress courses offered in our area. Always at our own expense and worth every penny ten times over.

Now that I am done with all of that background, I can get on with the telling of my experiences while serving with these great men and women.

While working the night shift, my partner and I had a report of a group of suspected illegal aliens traveling through a ranch near our area of responsibility. Our closest backup unit was about 20 miles away. This is the way things work in the Border Patrol and we have learned to work accordingly in dealing with large groups of people with just a couple of agents.

This particular ranch is used by a group of smugglers who love to attack agents using such weapons as pistols, rocks (of the large variety) and pieces of wood found lying on the ground. That being said, we were not about to take anything for granted with this (or any other) group; my partner was armed with a Remington 870 12 gauge and I was armed with an M4 carbine.

The two of us made our way to a spot that we felt would be ideal for apprehending this group while minimizing any potential risk of being overrun or outflanked. Unfortunately for us, the group had already made it past that location. It did not take us long to figure out that we had to act fast if we were going to catch this group before they got into the hills where it would become extremely difficult to track them.

Using my NVG (night vision goggles) I was able to spot six or seven people about 200 yards ahead of us moving slowly. My partner and I figured that one of us could get ahead of them while the other closed the distance from behind, allowing us a chance at surprising them before they could get to the high ground and spot our approach. Well, you know what they say about best-laid plans. The group made it to the foot of the hills and was afforded a grand view of my coming up behind them, as I was sky-lined coming over a ridge.

But just as I thought the group had spotted me, they began pointing to something in the opposite direction, the direction my partner was coming from. I assumed that they had heard my partner as he was making his way around them, so I crouched into a dark hole and continued to observe the group as they moved off the trail and took a position on some high ground. It was then that I noticed one of the guys pointing to where my partner was approaching from, and then bending down to pick up what appeared to be a large rock.

I radioed my partner, telling him what I had seen and what I thought the group was getting ready to do. He agreed with my assessment of the situation and said he would hold his position until I could get a little closer to the group while they continued to look towards my partner’s hiding spot. When I got to an ideal spot I let my partner know that it was time to move in and we knew that we needed to act fast and hard.

We went at them together from opposite directions; I moved for the first guy with the rock while charging my rifle, making it “hot” as my partner did the same with his shotgun. (Ever notice that the sound of a gun being charged is the universal language of dominance?) Immediately the group realized that this would end poorly for them so they dropped everything and followed our commands to the letter. The guy I took down was a little less compliant with my commands, however, due to his sudden discomfort from having defecated in his pants at the sound of our weapons being made ready.

After everyone was taken into custody and questioned we discovered that the smugglers of the group had gotten away at the first sign of being caught, but they (the smugglers) had given each person in the group an order to “Stone” or “Rock” any agent as soon as they saw one, or else they would be punished by the smuggling organization that they were using to get into the United States. Thankfully for us (and them) the speech we issued from our long arms was a little more convincing to the group that night than the smugglers’ promise of retribution.
— JB, TX