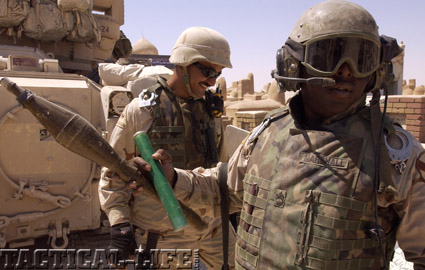 When Iraqi forces knocked out an M1A1 Abrams tank in August 2003, many speculated about the weapon they used. Mainstream opinion was the Iraqi forces had a new antitank weapon because their old RPG-7s were incapable of taking out the world’s most potent, heavily armored tank. But it was, in fact, most likely an RPG-7. Like the tanks it was originally designed to kill, the RPG has progressed and become capable of engaging more-modern armored vehicles. Rarely has an antitank weapon had such a long service life: over time, most targets evolve beyond a weapon’s capabilities. Fortunately, injuries to the tank’s crew were minor, but the August 2003 incident showed the 42-year-old RPG-7’s viability.

The RPG-7 has seen action in virtually every conflict. During Vietnam, U.S. troops erected wire-mesh fences around their base camps to detonate RPG rounds (by shorting the firing circuit) launched by Viet Cong (VC) and North Vietnamese (NVA) forces. Needless to say, the circuit’s shortcoming has long been corrected. The RPG has also proved effective against helicopters: a typical VC or NVA tactic was to wait until a chopper flared for landing and then fire an RPG into it.

The Soviets learned the same lesson in Afghanistan, when the Mujahideen turned RPGs into anti-helicopter weapons. In Somalia, the U.S. learned it again. (This was graphically documented in the book Black Hawk Down.) Forty years on the RPG-7 survives in frontline service with the Russian military and others. 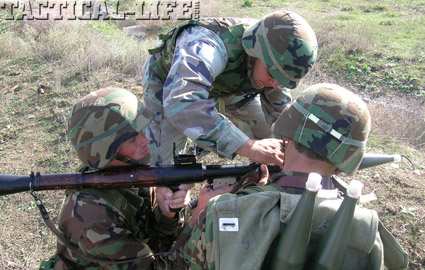 The RPG-7 succeeded the RPG-2, itself derived from the World War II German Panzerfaust antitank weapon. The RPG’s concept is simple: the launcher is essentially a tube with grip stocks and a sight (the RPG-2 has basic iron sights; the RPG-7, stadiametric optical sights for hitting moving targets). To load and fire the weapon, a cardboard booster tube is screwed to the rocket-grenade base, and the entire assembly is then inserted into the launcher tube from the muzzle end. An index notch on the launcher’s muzzle engages a stud on the grenade’s rocket motor to ensure that the booster percussion primer is aligned with the launcher firing pin.

The firing mechanism constitutes a trigger and single-action hammer that must be cocked to fire the grenade. The hammer strikes a firing pin that impinges on the booster’s primer, firing it by the age-old percussion method. The booster fires and ejects the grenade out of the launch tube. After about 10 meters, the rocket motor ignites and carries the grenade to its maximum range. Once the rocket motor ignites, the rocket velocity increases from 120 to 150 meters per second (mps) to upwards of 300 mps. With a competent grenadier, most PG-7 grenades have approximately a max range of 500 meters and an effective range of 300 meters. The grenade self-destructs after 5 seconds. Because the RPG-7’s warhead is outside the launch tube, the warhead’s diameter can vary. On the other hand, anti-armor weapons like the M72 LAW and the AT4 have warheads inside their launch tubes, which limit the warheads’ diameters.

The original RPG-7, slightly different from current models, was modified shortly after its introduction. Redesignated the RPG-7V, it continued to the present day virtually unchanged. In 1968, an airborne model, the RPG-7D (“D” is for desant, or Russian for “parachute”), was introduced. It could be disassembled into two sections when the airborne grenadier jumped. Both the RPG-7V and -7D have a bore diameter of 40mm and the same length when ready to fire. The latest models are the RPG-7V1 and RPG-7D1, which have specifications identical to their predecessors.

Russia is not the only producer of the RPG-7: Bulgaria, China, Iraq, Iran, Pakistan, Poland and Romania also produce the weapon, a testament to its simplicity and excellence. Widespread use of the RPG-7 continues across the world, and the weapon is offered from several manufacturers (and on the gray and black markets).

A short-lived variant of the RPG-7, the RPG-16, showed up in a few Soviet units in the early 1980s. The RPG-16 had a 58.3mm launch tube, which probably increased its range, though doing so would have been problematic without some kind of guidance feature. The RPG-16 was never marketed outside Russia, likely being a prototype given to their troops for testing. It was never adopted; Russia promotes the RPG-7 to this day. 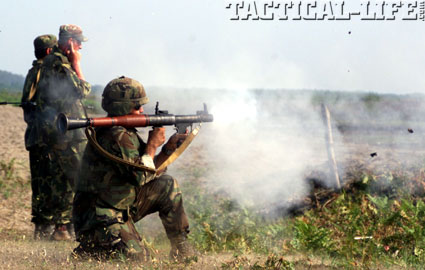 Original PG-7 high-explosive antitank (HEAT) grenades had a diameter of 85mm. (The launcher is designated the RPG-7, while the grenade is designated the PG-7.) By the late 1960s, the original PG-7 round, now obsolete due to advances in Western armor, was supplanted by the PG-7M grenade. This new grenade only had a 73mm diameter, but it had better performance against existing armor.

In the 1970s the PG-7M round was updated with new fusing explosives and designated the PG-7N. When the PG-7N reached troop units, a new propelling charge was also introduced. This new “prop charge” raised the PG-7M/N’s velocity from 120 mps to 140. Meanwhile, the RPG-7’s versatility was becoming clear to the Soviets: they began fielding other types of warheads. What distinguishes these rounds from HEAT rounds is that their blast fragmentation warheads are the same diameter as the launch tubes, 40mm. Each of these rounds have a range of 1,000 meters and carry a charge of 210 grams of hexogen. Both Russia and Bulgaria continue to produce the OG-7s.

Armor Race
Then in the 1980s, armor developments on both sides of the Iron Curtain made the PG-7N obsolete. The explosive reactive armor (ERA), initially fielded by the Israelis and a few others, was enthusiastically adopted by the Soviets. Every type of tank in the Soviet/Russian inventory was fitted with ERA. It defeated all warheads with unitary-shaped charges and was one of the Soviets’ “nasty surprises” when it appeared on Group of Soviet Forces in Germany tanks in 1984. Overnight the ERA rendered every NATO HEAT warhead obsolete, causing a panicked development of countermeasures such as the TOW-2B.

Of course, technology is a double-edged sword: the Soviets’ ERAs surpassed all their own unitary-shaped charge warheads, including the PG-7M/N. And the Soviets got a nasty surprise of their own when “Chobham Armor,” named for the British research facility where it was developed, went on the next generation of Western tanks, such as the British Challenger, the German Leopard II and the US M1 Abrams. This new armor defeated not only shaped charges but also most armor-piercing shot. The armor is generally called “spaced armor” because it has layers of different materials with spaces between them. The armor’s exact makeup is still classified.

The Soviets knew that to defeat both ERA and spaced armor with HEAT warheads, they needed a tandem warhead, which has two shaped charges and a small precursor (tip charge, usually 50mm in diameter) that’s followed by a much larger main charge. The Russians ultimately developed the PG-7VR. The Russians claim this ungainly warhead is capable of defeating the M1A1 tank’s frontal armor. While this is questionable, the PG-7VR will almost certainly defeat the side and rear armor of any M1 tank, including the M1A1 and M1A2, as well as the ERA.

The ERA works by throwing flyer plates into the path of the shaped-charge jet, essentially forming a continual mass of metal for the jet to work through and dissipating its energy before it can reach the base armor. The tip charge detonates the ERA and causes the flyer plates to move out of the path of the main charge, which detonates microseconds after the tip charge explodes. While unconfirmed, the PG-7VR’s 105mm main charge should be capable of 450 to 500mm of penetration behind the ERA. It was likely one of these rounds that killed the M1A1 in Iraq. But there is another possibility, the PG-7VL, not to mention advanced versions of rocket-propelled grenades that have been developed elsewhere. 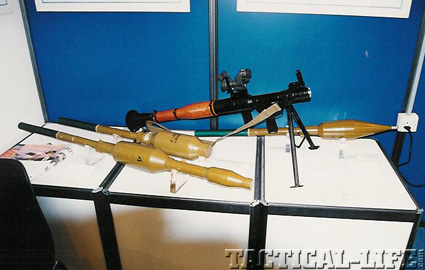 A tradeshow exhibit showing an RPG-7 launcher and recently introduced rounds designed to kill tanks like the M1A1 Abrams and for use in urban combat. (Rear to front) PG-7, RPG-7 launcher, TBG-7 Thermobaric round, PG-7VR. The PG-7VR or a similar Iranian round was probably used to knock out the M1A1 last year in Iraq.

The Answer to ERA

The PG-7VL is a 93mm unitary-shaped charge grenade for use against, armored fighting vehicles, bunkers and tanks without ERA or M1-type special armor. Russian specification tables claim that the PG-7VL will penetrate roughly 600mm of armor plate, or 6 cone diameters. For a grunt weapon, this is very impressive (assuming the claims are accurate). One of the tradeoffs of increased diameter, however, is increased weight, resulting in an effective range of only 150 meters (still worth the increased terminal performance).

Both the PG-7VR and PG-7VL have seen use on both sides of the conflict in Chechnya. In Chechen hands, they were so effective against Russian tanks that Chief of the Russian General Staff Marshal Grachev stated publicly that Russian tanks were junk! Neither of these grenades will defeat an M1A1 across the frontal armor, but with good tactics and a side or rear attack, either is capable of taking out even an M1A2.

The Russians new PG-7VyA is a high velocity multi-role rocket intended for lightly armored ground and air targets. Instead of a shaped-charge warhead, the PG-7VyA employs an explosively formed penetrator (EFP) to achieve terminal ballistics. EFPs, also known as self-forging fragments, use a concave disc of tungsten or other heavy metal backed by an explosive charge. When the explosive detonates, the disc collapses in on itself and forms a long narrow rod that is projected along the original axis at thousands of feet per second, faster than any gun-fired projectile. Even small EFPs are capable of penetrating several inches of steel armor. The PG-7VyA uses an EFP to penetrate the target, forming an opening for the main charge, which passes through and explodes inside the target.

For some time both the Russians and other former Communist Bloc countries, especially the Bulgarians, have produced other types of warheads for the ubiquitous RPG-7. One such warhead is the mentioned OG-7. Another is the TBG-7 thermobaric warhead, a Category 3 fuel air explosive (FAE), which creates its own fuel front as the deflagrating cloud expands. While the FAE overpressure is less than conventional explosives, the duration of overpressure is much longer, making a Cat 3 FAE much more effective than conventional explosive warheads in enclosed spaces such as caves and buildings.

The Bulgarians have also developed a tandem warhead called the PG-7LT, which appears to be identical to the 93mm PG-7VL with a 50mm tip charge added to clear ERA. Their HEAT/APERS (antipersonnel) KO-7 is approximately 50mm in diameter and apparently for bunkers and light vehicles. A similar round, the OG-7BG HE-Frag, appears to be nothing more than the KO-7 without the shaped charge. Later Bulgarian APERS rounds are the OG-7V and the OG-7VE. 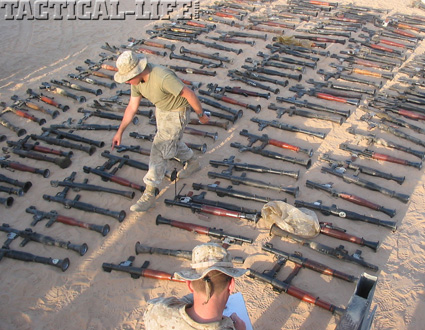 Iran has developed a tandem warhead similar to that of the Russian PG-7VR, which Parchin Missile Industries designates the “light anti-tank rocket with two-stage warhead.” Parchin also makes a unique unitary-shaped charge PG-7 called the Nafez, which is claimed to penetrate 500mm of rolled homogenous armor. The Iranians also make an APERS PG-7 version of their own, the Saegheh.
As to the future, the RPG can easily be converted into a bargain basement antitank guided missile (ATGM). Although this may sound far-fetched, the Israelis developed a laser-guided version of the RPG-7 and had it ready for production some years ago. At 500 meters, the probability of hitting a tank was raised from virtually nil to about 80 percent. It is only a matter of time until someone else transforms the RPG-7 into a poor man’s missile launcher. The RPG-7 continues to adapt to new warhead technology. 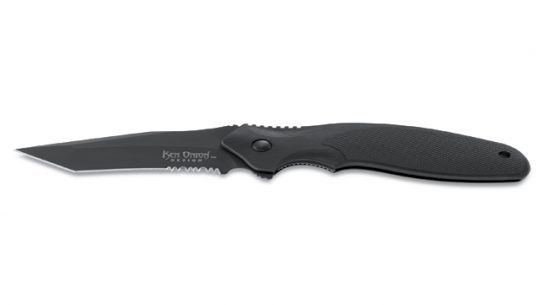