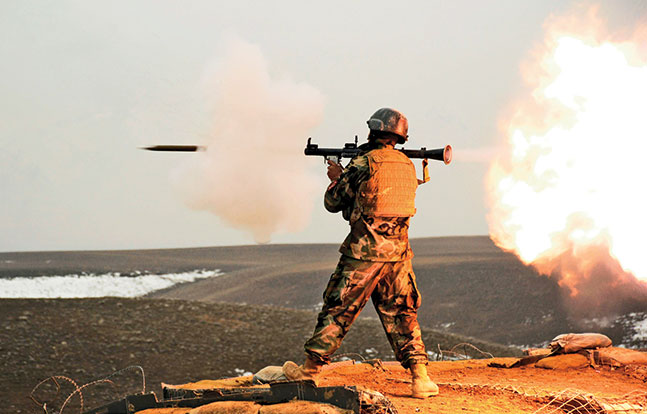 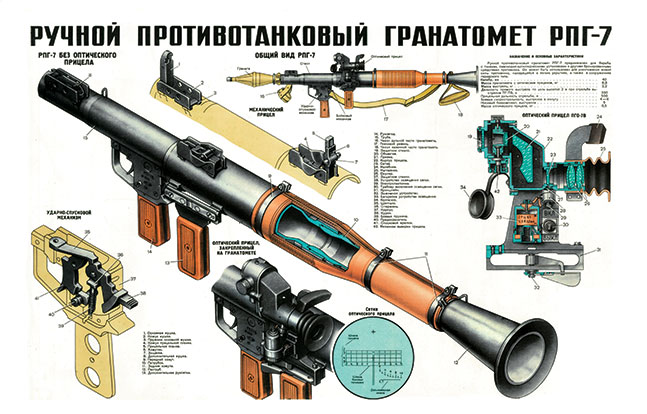 2 of 5
Foreign Firepower: The RPG-7
The RPG-7’s munition (top) is deadly effective. Shown above is an original Soviet training poster for the RPG-7 launcher, with detailed sections on optical sights and firing mechanisms for the easy-to-use weapon. 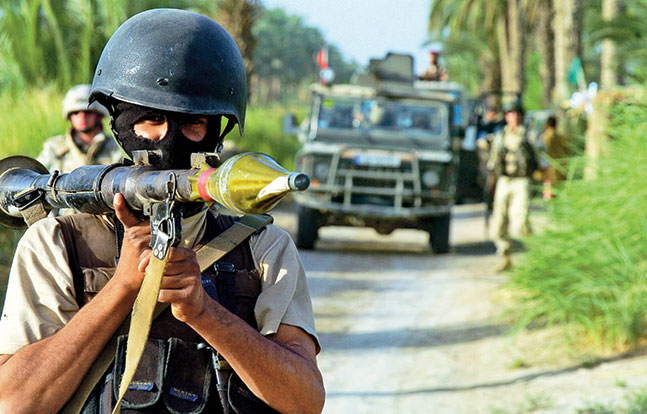 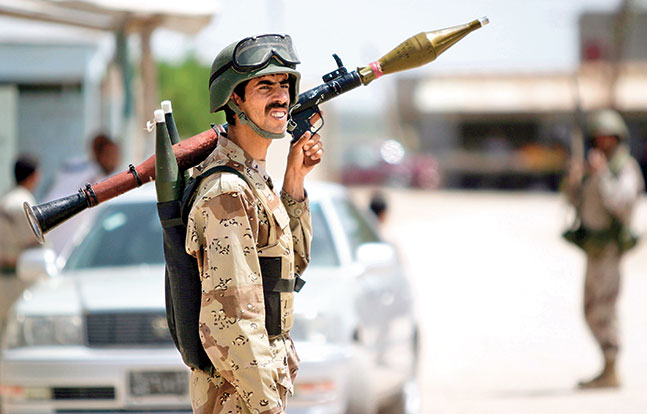 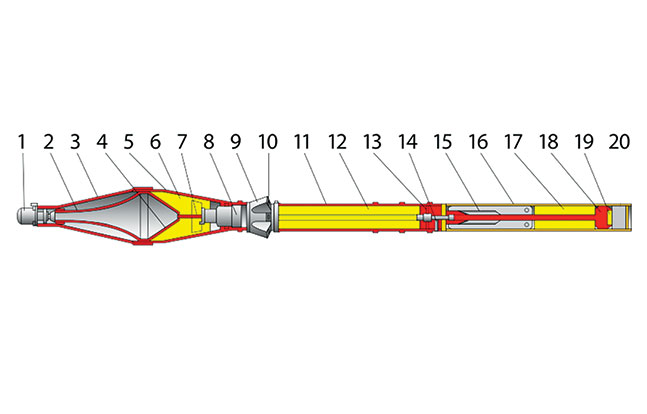 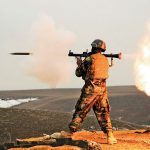 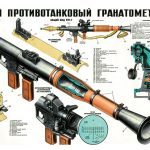 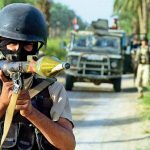 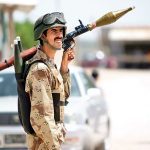 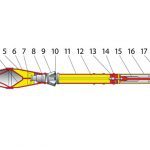 I have been in quite a few conflicts where the RPG-7 rocket-propelled grenade launcher was readily available—Sierra Leone, Beirut, El Salvador and more. But only once has this weapon been purposely used against me.

That happened in Africa during one of South Africa’s cross-border raids into Angola. I was in the passenger seat of a French-built Aerospatiale Alouette III helicopter that was providing top cover to an armored group near the town of Xangango on the great Kunene River.

The gunship was commanded by a youthful lieutenant who, like most young pilots fairly new to action, believed he was invincible. He and his machine gunner went in low and fast to strike at an enemy position that had been identified by one of the soldiers on the ground. The retaliatory fire was heavy—from a 12.7mm Soviet gun we concluded afterwards—but the lieutenant was undeterred, and they silenced the gun, which was hidden under some trees with another weapon.

We had just pulled out of that approach and were gaining altitude when there was an enormous blast just above our heads. For a moment or two we were blinded by the flash and smoke, but by then our momentum had moved us ahead of that bit of drama.

“You guys OK?” the lieutenant asked us through his headset. All I could do was nod, but the gunner behind us had quite a lot to say about this unexpected attack because a piece of shrapnel had zinged off his flying helmet. It could have been much worse, he conceded afterwards—a couple of inches lower and who knows what would have been the outcome.

But that RPG explosion did underscore one aspect of its capabilities: If it is not a direct hit, the blast is terrific, but the shrapnel is usually fairly light, in large part because the grenade part of the weapon is covered by a thin steel “envelope.” This is essential if the RPG is to travel the roughly 3,000 feet it needs to cover before it self-destructs.

I was even luckier the next time I had a close call with this device. I was travelling in Mozambique with my three sons on a diving trip shortly after that civil war had ended. We had come to a stop towards the front of a roadblock when an army vehicle came around the bend and threw out a large plastic bag. I froze when I noticed that the thrown parcel contained the business ends of about a dozen
RPG-7 grenades. The container was clear plastic, and there was no mistaking the contents. Worse, the bag landed alongside our front wheel, together with a shout from the fellow throwing to one of his mates on the ground to “Grab that stuff!”

The rocket grenades were obviously intended to resupply the military unit in that area, and the truth is, had only one of them detonated, they all would have gone up. And we would have, too!

In theory, it was supposed to be quite safe because the Soviet instruction manual explains that the grenade will only explode after it has been launched: It needs the requisite number of Gs to be armed, which, as any armorer with battle experience will tell you, can sometimes be a problem with Moscow’s armaments.

Also, things don’t always work out the way they’re intended. I know of one South African soldier killed in Angola after handling an RPG-7 grenade that he’d filched from a captured enemy arms depot.

There is no question that the RPG-7 — a portable rocket-propelled grenade launcher — like its Soviet cousin, the AK-47, is one of the finest insurgency weapons ever designed. It is rugged, cheap, accurate when properly used and incredibly easy to handle. The weapon needs perhaps five minutes of instruction and a reasonable eye and the results are usually pretty good. I fired a bunch of them after we’d captured an arms dump in Angola during Operation Protea. Then we all had a go, using a 44-gallon drum about 100 yards away as a target.

The weapon’s munition has two parts and includes a “booster” section and a “warhead and sustainer motor” section. These must be assembled into the ready-to-use grenade. Once the rocket part has been clicked into the business end of the weapon, you sling the launcher over your shoulder, make sure that nobody is standing behind you, take aim through a large pair of metal sights and pull the trigger. An almighty blast follows, but there is no discernible recoil.

There are various additions available on the international arms market, including specialized long-distance sights, but these usually are expensive. Several were captured by French forces in Mali, originally delivered to Muammar Gaddafi’s Libya and stolen by recalcitrants after he had been overthrown.

I exchanged a few emails with Mark Bowden shortly after he had published Black Hawk Down. He was then still working for The Philadelphia Inquirer, and I asked him about RPG-7s used in the Mogadishu attack. Mark confirmed that there were an awful lot of them, one of the reasons why two U.S. Army Black Hawks were knocked out of the sky by the Somali irregulars.

Subsequent research showed that forces linked to several Somali warlords had been waiting on the ground for the choppers to arrive over the scene, together with hundreds of RPG-7s that had been ferried in from Yemen by al-Qaeda. All the rebels had to do was point them at the gunships and fire, reload and do it over and over again.

Because of the volume of fire and the fact that the grenades self-destruct, there simply had to be some hits. And there were, as Bowden graphically depicts in his remarkable book.

It is interesting that, as a weapon, the RPG-7 has been out there operationally for more than half a century, the first coming off the production line in 1961. It had been preceded by the more basic but equally lethal RPG-2, of which we saw a lot in the Rhodesian War.

More recently, the South African Army acquired them in large quantities from Eastern European arms dealers and issued them to its troops. There was a stage during the Border War when it considered manufacturing RPG-7s.

In its day this weapon was a Vietcong mainstay, and even the Provisional IRA got to use it against the British Army in Northern Ireland. In Afghanistan and Iraq today, there is not a single irregular unit without RPG-7s, as many news clips now being shown of Sunni militants on the move demonstrate. RPG-7s are also commonly seen in the hands of government forces as well.

This situation also holds in Mali, where the French are battling AQIM (Al-Qaeda in the Islamic Maghreb) and Tuareg forces in the north of the country. These forces are also linked to Nigeria’s militants, who call themselves Boko Haram.

Currently there are more than 40 countries whose militaries use RPG-7 launchers, and nine countries manufacture several variants, including China and Iran, which manufactures them with olive green handguards, pistol grips and in a “commando” variant.

With that in mind, the RPG-7 has earned its reputation as a powerful and effective weapon. Its low cost, easy availability and simplicity of use make the rocket-propelled grenade launcher  a common sight on many battlefields around the world today. And, with more than half a century of use under its belt, there is no telling how many more decades this venerable weapon system will continue to fight in war. 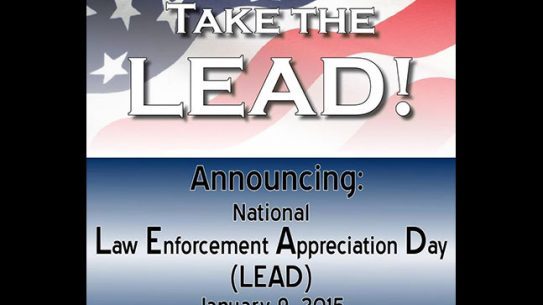 National Law Enforcement Appreciation Day is an opportunity for all in our nation to...