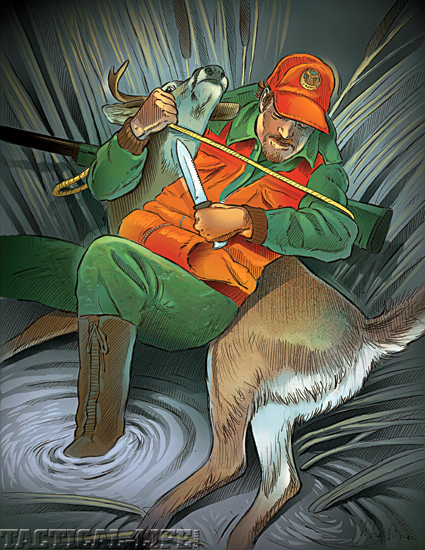 The sun had set and dusk had come early to the shady, deep swamp. I had three-quarters of an hour until Michigan’s game laws required me to unload my rifle. But this was the witching hour, that magical time in the daily transition between light and darkness when nocturnal forest creatures leave the safety of their daytime hides to forage. There were only sparse patches of snow left on the still unfrozen ground, where a regular shedding of leaves and tiny dead twigs from the dense poplar canopy overhead made walking silently impossible for anything heavier than a spider.

Everything was planned for, except my scope. I was field-testing a quick-detach mounting system for the SKS, a gun not known for getting whitetail in the early ‘90s. The folks at DC Engineering had even thrown in a 4×32 compact scope that bore no recognizable name brand and didn’t seem to ever focus when I’d mounted and zeroed it earlier that day. But it had punched three 0.75-inch three-shot groups at 100 yards, so I dismissed the blurriness to tired eyes.

A heavy, muted snap from behind my left shoulder telegraphed the approach of a large deer on one of the maze of trails that grew more numerous the closer they got to prime deer feeding areas. From the corner of my left eye, I watched a forkhorn buck walk unconcerned right up to me. From a distance of merely 15 feet, it stopped and scrutinized my concealed form, sensing that something was different in this place. I willed myself to relax while it studied my purposely inconspicuous but apparently still noticeable hide. After a long minute, the buck lost interest and continued on its way.

I eased the SKS’ safety lever—rubberized to keep it from making that metallic “snick” for which the mechanism is famous—to the fire position as the buck’s hindquarters withdrew. Gun shouldered, finger lying next to the triggerguard, I popped the Butler Creek scope caps and drew a bead. I softly imitated the bark of a red squirrel, and the whitetail stopped to look back over its right shoulder, tail down, but alert for danger.

My finger was on the trigger, and I had him. The only problem: In this twilight, I clearly saw two deer in my crosshairs. I had to shoot fast, so I guessed that the image on the right was the real thing, and sent a 125-grain Remington softnose quartering into its chest from behind. I guessed wrong—the real deer took the hit just below center spine and lunged ahead using only its hindquarters into a dense marsh of cattail and reeds too tall to see over. Cussing, I chased after it, because darkness was falling rapidly, and there were numerous predators in this swamp that’d gladly eat, even abscond with, a fresh deer carcass.

There were numerous trails through the marsh, but even in near darkness I could see the muddy, wallowing path my prey had made. I slogged after it through ankle-deep water knowing that the hit would be a fatal one, wherever it had impacted. After just 50 yards of pursuit, the buck popped up, silhouetted against the green cattail leaves about 100 feet away. I ignored the scope and dropped down to its mount’s see-through tube. As soon as blade and notch centered on the deer’s head, I released the sear.

The buck fell back into the massed cattails. Gripped by primordial predatory instincts and a pragmatic sense of urgency, I ran forward, drawing my Schrade Extreme “Bomb-Tech” survival knife from its sheath as I closed on the stricken animal. It was too dark to see sharply, but as I approached I could see its hind legs kicking.

I dove across the deer’s neck, pinning it the way a cowboy holds down a horse, except that the carbine hanging across my chest from a paracord Ranger sling was also across its neck, under my full body weight. I grabbed the underside of the whitetail’s muzzle in my right hand, pulled its head back to expose the throat, and drove my knife’s stiletto-ground blade into the underside of its chin. The point easily penetrated the soft palate, and I pushed hard when I felt resistance from the bony upper palate, driving the Schrade’s big blade into the brain pan. It pierced the upper palate with little effort, then, to my surprise, slipped easily through the top of the buck’s skull to emerge, shiny and menacing by the light of a rising moon, from between its antlers—just inches from my forearm.

The Bomb-Tech’s heavy, rearward-facing serrations demanded almost as much force to withdraw the blade as was needed to drive it home. But it came free with a yank, shredding whatever tissue and bone it came into contact with along the way. It was without a doubt a fatal wound by itself. I had to grin when I thought of all the cocky cracks I’d heard about the futility of having a knife in a gunfight.

As it turned out, the buck had been dead when I dove across its neck. My second shot looking through the iron-sighter tube impacted so perfectly that it could only have been luck under those conditions. The bullet had entered squarely between the eyes, leaving an upheaved ridge of shattered bone under the scalp before exiting, apparently mostly unexpanded. That’s why my knife had driven so easily through that normally impenetrable bony skull plate. I’ve always been grateful that no part of my body had been in the way when it did.

SEND US YOUR STORY!
Tactical Knives pays its standard column rate for the “It Happened To Me” stories it publishes.
If you have one you would like to share with our readers, please send it to Tactical Knives, P.O. Box 538, Castle Rock, WA 98611 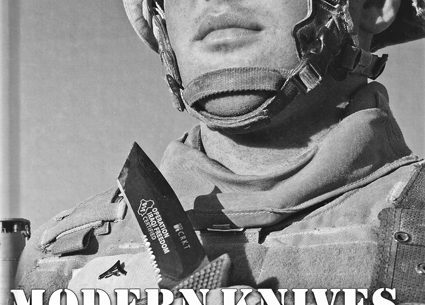