SENTINELS OF THE TOMB

Every minute of every day, a formal, disciplined ceremony occurs in Arlington, Virginia. It starts with a 21-second count, and every precise step moves to this 21-second rhythm to show the highest honor for what they are asked to protect.

The eyes of the nation are always on them and millions have stood in awe watching this ceremony in utter silence, paying the highest respect for a sacrifice few truly understand.

The Tomb
The Tomb of the Unknown Solider sits atop a hill overlooking Washington D.C. in Arlington National Cemetery. It came into existence in 1921 after Congress approved the burial of an unidentified American soldier from World War I.

In Arlington Cemetery, a place of high honor and the final resting place for “those who have given the last full measure of devotion to their nation,” is a simple, white marble sarcophagus with three simple Greek figures sculpted on it representing Peace, Victory, and Valor. 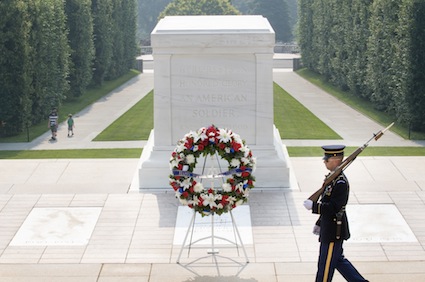 Interned in it are the unknown soldiers of WWI, WWII, Korea and a place left open for Vietnam, whose remains were identified in the 1990s and reunited with the family. All have been awarded the Medal of Honor.

The Sentinels
The Tomb is protected 24 hours a day, 365 days a year by an elite unit within the U.S. Army 3rd Infantry Division (The Old Guard). The unit is all-volunteer, and millions have been awed by their military bearing and precision.

The sentinels of the Tomb are some of the most dedicated and disciplined members of the U.S. military. Attaining this privileged position is so difficult that 80 percent of applicants fail, and since February of 1958, only 500 individuals have been authorized to wear the rare Tomb Guard Identification Badge. 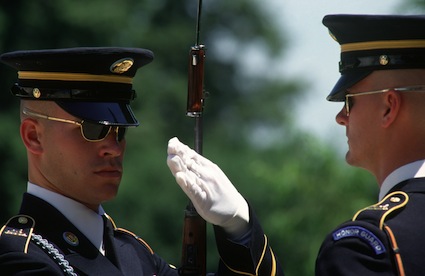 If a solider accepts the challenge, they are assigned to Company E of The Old Guard, must be in superb physical condition, have an unblemished military record and be between 5’10” and 6’4,” with a proportionate weight and build. An interview and a two-week trial then occur to determine if the volunteer has the capability to train as a sentinel.

The trial phase includes memorizing seven pages of Arlington National Cemetery history and reciting it verbatim. This allows the trainee to earn a “walk.” A walk occurs between guard changes. A daytime walk is one half-hour in the summer and one hour in the winter. All night walks are one hour.

If a soldier passes the trail phase, “new soldier” training begins and trainees must learn the history of Arlington National Cemetery and grave locations of nearly 300 veterans. They must master the guard-change ceremony and the manual of arms that takes place during the changing of the guard.

Uniform
It takes a sentinel approximately 8 hours to prepare their uniform and weapon for duty. Their uniform includes standard U.S. Army dress blues, sunglasses and standard military shoes that have raised (built up) soles, a steel tip on the toe and a “horseshoe” steel plate on the heel to prevent wear and allow the sentinel to move smoothly during their movements.

On Duty
During their 24-hour shift, sentinels stay in quarters under the Memorial Amphitheatre.
Today, sentinels carry the M14 rifle while wearing moistened gloves to protect the Tomb; the gloves allow better handling of the rifle. The M14 is operational. It is the latest in a long line of rifles used by the sentinels.

Sentinels initially carried the M1903 Springfield Rifle, a .30-06-caliber bolt-action, which was standard issue in the Army from 1903 thru 1936. The M1903 uses a five-round magazine and remains in use today as a ceremonial rifle.

In 1936, the M1 Garand replaced the M1903. The M1 was one of the first semi-automatic rifles that offered an improvement in firepower. It was rugged, reliable and tolerant, and fired a .30-06-caliber cartridge in eight-round clips. LTG George S. Patton, Jr. once said, “In my opinion, the M1 Rifle is the greatest battle implement ever devised.” 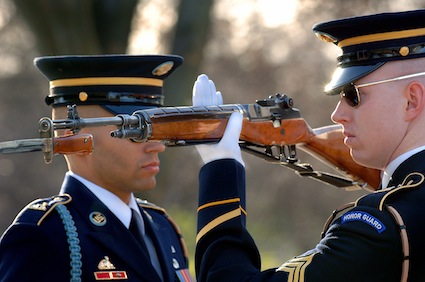 A U.S. Army Sergeant, 3rd U.S. Infantry, The Old Guard, inspects a Tomb Guard Sentinel’s rifle before his watch at the Tomb of the Unknown Soldier at Arlington National Cemetery, Arlington, Va., on Jan. 9, 2008. The Tomb of the Unknowns is guarded 24 hours a day, 365 days a year, regardless of the weather conditions. (U.S. Navy photo by Mass Communication Specialist Seaman Michael Russell) (Released)

Today, the M14 is still used as a sniper rifle (M21) by many military units and is the standard ceremonial weapon of the 3rd U.S. Infantry Division (The Old Guard) and the weapon carried by the Tomb sentinels.

When it’s time for the guards to change, a relief commander says, “Pass on your orders.” The current sentinel commands, “Post and orders remain as directed.” The new sentinel then replies, “Orders acknowledged,” and this reverent ceremony begins again with the M14 rifle.