Boot, rookie, recruit or trainee—whatever your agency calls them, they are the future of law enforcement. As officers, you may not have any input on who gets hired, but you can have an influence on how they are trained. Some officers shy away from being training officers because they think it’s too much of a hassle or they don’t want someone in their car all the time. Many don’t want the extra responsibility. In most agencies, especially smaller ones, there aren’t a whole lot of incentives to train new officers. I have held many positions during my career and participated in numerous collateral duties. Of all the positions and duties I’ve held, I feel being a field training officer is arguably the most important.

Being a trainer isn’t for everyone. Officers who become field trainers do it for their own reasons. Some want to build a resume, some do it for extra pay, but usually the best trainers are the ones who do it to share their experience and make sure their counterparts are ready for the challenges ahead. One of my coworkers posted on social media recently that no one is born an expert and it takes time and experience to get to where you need to be. I added that once you do become an expert, or at least become technically and tactically proficient, that you have an obligation to share what you have learned with the next generation. Knowledge is kind of like money—you can’t take it with you when you go, so you might as well spread it around. In our chosen profession, any small mistake or missed detail can mean the difference between life and death. It is our responsibility to our brothers and sisters to make sure they have the tools to survive, both literally and professionally.

I originally became a field training officer because I was frustrated with working with new hires who had recently been released from training yet lacked basic skills and presented officer safety issues. I was fortunate when I started and had trainers who truly believed in what they were doing and held me to a high standard. I have been involved in a lot of situations that could have gone sideways if I hadn’t been prepared, including a line-of-duty shooting. None of us will live long enough to learn everything from our own mistakes, so we need to pay attention and learn from others—both their triumphs and their follies. Our jobs are dangerous; there’s no way around that. Preparing new hires can help us minimize some of the risks.

Even if you’re not officially a training officer, you can have a huge impact on new officers. Rookies look up to their seasoned peers and will follow the examples set by them. Experienced officers should keep that in mind when working with rookies and other less experienced officers. Like it or not, you will fall into the role of mentor in many situations. We owe it to ourselves, our agencies and our law enforcement family to set the best example we can.

Being a field training officer can be extremely rewarding. Not only can you share your knowledge and make sure your agency has the best officers possible, but it also helps the trainer stay sharp. Working with newly graduated officers pushes trainers to stay current with changes in laws and what’s being taught at the academy. Seeing an officer you trained go on to succeed can be rewarding in itself; knowing that the training you provided helped keep them alive is even better. I have received recognition and awards for things I have done in my career, but the recognition that had the biggest impact on me personally wasn’t an award, it was a phone call from an officer I trained who had just been involved in a shooting. He called to thank me. He believed that the training he had gotten from me and his other training officer had saved his life and the life of his partner because he knew what to do and didn’t hesitate. I wouldn’t begin to take any credit for the outstanding job that officer did, but just the fact that he believed he was ready for the situation makes all the extra work of being a field training officer worth it.

ABOUT THE AUTHOR: Scott Johnson started his LE career as a reserve deputy in 1995 before becoming a deputy sheriff. In 2007, he worked for the Department of State as an international police advisor, and he currently works in the patrol division of a large southeastern police department. 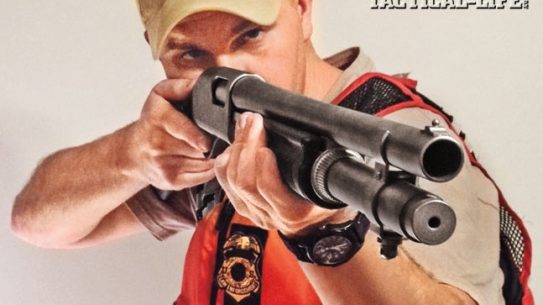 The Remington 870 Special Purpose Marine Magnum is designed to put an end to...