3 of 3
Sheriff David A. Clarke: We the People’s Top Cop
“… I encourage law enforcement officers to keep fighting because, no matter what, communities would collapse without them.”

Law enforcement around the nation has been called into question recently. A few high-profile incidents have catapulted the profession into a negative light, forcing many in the public to question the scope of law enforcement and parameters within which police officers operate. At times this debate has been inflamed by a minority of individuals who seek to undermine law enforcement with public misinformation and calls of distrust. Some have said the media plays into this by reporting fiction versus fact and then is slow to correct the record. But the damage is already done.

For many officers, this lack of support—even within the ranks of law enforcement management—has further eroded confidence in their jobs. The assassinations of NYPD Officers Rafael Ramos and Wenjian Liu punctuated this feeling. While the public has its questions, so do the officers, and many are asking, “Why?”

Rising above the fray, one man has become a powerful force in defending our law enforcement officers. “Officers around the country aren’t afraid to do their job, but are starting to ask if it’s worth doing it,” said the outspoken Sheriff David A. Clarke.

Sheriff Clarke was raised in Milwaukee, Wisconsin, by parents who were involved and focused on ensuring he would stay on the right track. After completing high school, he was at a crossroads. “I was working at a beer distributor during the summer and sort of not sure what I wanted to do,” Clarke said. “My Dad started talking to me about a law enforcement career.”

The future sheriff excelled at police work and started to seek every educational opportunity he could. “I wanted to advance and took every training or educational opportunity I could find. Then I started taking the promotion tests and did well. I was promoted from a squad supervisor up the ranks and eventually was identified by the chief of police for a command officer position and was selected as the commanding officer for the department’s Intelligence Division.

“After serving in that position for a few years, I decided that I wanted to lead a law enforcement organization. Then, in April 2002, I was presented with an opportunity of a lifetime. The Milwaukee County sheriff retired, and the governor needed to install an interim sheriff. I got the call and was appointed as the interim Milwaukee County sheriff by Governor Scott McCallum. Unfortunately, the appointment was only until November of that same year. If I wanted to keep the job, I’d have to run an election campaign.”

In November of 2002, Sheriff David Clarke won his primary election and then the general election with over 70 percent of the vote. He became the 64th Milwaukee County sheriff, making him the top law enforcement officer in the county.

“The sheriff is directly accountable to the people, therefore it is one of the few independently elected law enforcement positions in government. As sheriff, I’m responsible for law enforcement services in 19 cities, towns and villages in Milwaukee County. This includes patrolling the freeway, court security and, in 2009, I took over the management of a broken county prison system. In short order, I turned the prison around and revamped the way the Sheriff’s Office operates.

“In my opinion, I always see the Sheriff’s Office as a force multiplier for local law enforcement. We can bring more resources and manpower to any incident a small, local department may face,” said Sheriff Clarke.

Milwaukee, like many other urban areas, is experiencing a recent increase in crime rates. Some of this is arguably attributable to the anti-law enforcement sentiment that has prevailed in the U.S. in the wake of the Ferguson, Missouri, incident, the aftermath of which proved the officer’s actions were justified.

“Generally, crime rates ebb and flow depending on several factors, but I do believe the criminal element is taking advantage of some of this anti-law enforcement discourse,” Sheriff Clarke said. “I also think that our revolving-door criminal justice system does a disservice to the criminal and community. Both lose as the ‘go soft on crime’ efforts see career criminals receiving lighter sentences and then getting dumped back out into the streets of a community with no hope and no jobs.”

Concerning policing, some hold the opinion that the reason crime rates have risen is because some officers have just stopped doing their job. But Sheriff Clarke rebutted this. “American police officers are starting to doubt—not quit, but doubt—if it’s worth it to do the job. What we’ve probably seen decrease is the self-initiated/proactive policing, which is where some of the best law enforcement work occurs. Cops might be starting to ask themselves if it’s worth it to put their life and career on the line for an outcome that could end their career with a criminal indictment.”

Additionally, around the country there have been calls to decriminalize or lesson drug offense sentencing because they are overly harsh and disproportionately impact minorities. This would include reducing or eliminating mandatory minimums for some drug offenses, as critics point to America’s prisons being overcrowded with non-violent drug offenders.

To this point, President Obama recently commuted the sentences of several individuals convicted of federal drug trafficking due to his administration’s belief that federal drug sentencing is archaic and in need of reform. Some in Congress have also been seeking criminal justice drug sentencing reforms. “The liberal left creates cute catchphrases to soften crimes like ‘low-level drug offenders,’” Sheriff Clarke said.

“The truth is, 88 percent of inmates are held in state prisons, and only about 12 percent in the federal system. All the low-level drug arguments are myths and lies—not facts. If we reduced mandatory minimums, we’d send the wrong message to criminals that we don’t take those crimes seriously. Clearly, the recidivism rates show that our current government programs of rehabilitation are just not working,” Clarke said.

In the wake of these high-profile law enforcements incidents, calls for police to wear body cameras have been echoed throughout the nation. But even the ACLU has concerns about body cameras and their impact on “law enforcement officers’ privacy.” Sheriff Clarke feels that “body cameras are rapidly becoming part of the law enforcement profession and a tool for law enforcement. The problem is, their implementation has thus far not been well thought out. There are many privacy concerns for both civilians and officers. Citizens may not want to be recorded. The other issue is storage—who stores the videos, for how long, who has access and chain of custody issues. None of the laws in place cover the use of this technology and until the laws catch up, the use of these could have unintended consequences.”

Despite his outspoken nature and stance on many hot-button issues, Sheriff Clarke spends time talking with and acting as a mentor for children, particularly those living in what some would describe as “at risk” neighborhoods. One of the themes he constantly communicates to these kids is making good lifestyle choices.

“I tell the kids you have to make good lifestyle choices. No one forces you to drink, do drugs or steal—that is your choice. I also tell them that they must have respect for authority, something missing in many communities. They also have a duty to comply with law enforcement, and I tell them bluntly that they aren’t going to win on the street and if you feel mistreated, file a complaint. But ultimately, you have to take responsibility for your actions and make good choices.”

The sheriff believes, “We have to transform communities—not law enforcement.”

Clarke From the Hip

“Consider taking a certified safety course in handling a firearm so you can defend yourself until we get there. You have a duty to protect yourself and your family.”

“As a black man, I’m especially sensitive to the Second Amendment…Abolitionists Frederick Douglass and Ida B. Wells were stalwarts in black people being able to arm themselves against mob lynchings…I am not going to cede any of that right back to the federal government …”

“Our immigration policy is a disaster. Multiculturalism is a disaster, and it failed miserably when European countries all opened their borders and now they’re all tightening up. France demands assimilation now. So now, yes, we do have to look at immigration as a national security threat.” 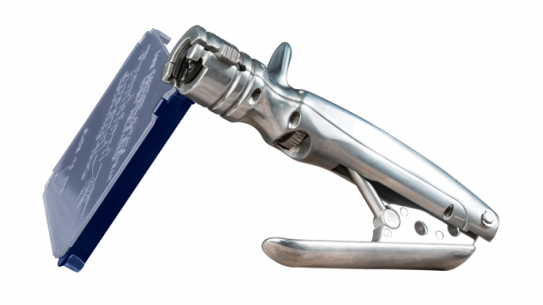