0
SHARES
1
VIEWS
Share on FacebookShare on Twitter
Once considered more a badge of rank or position, improvements in handgun technique have made it a viable weapon.

Times change. Battles and battlefields change, as do the weapons and tactics employed. As technology and tactics evolve, the technique of training to take advantage of new weapons can be the last part of the equation to change. The truism that we fight the current war with what we learned in the last war is nowhere more true than in combat marksmanship training.

With more than a decade’s experience as a small arms instructor, one trend in training I noticed is that high-level shooters are able to perform about three times above the Army’s “expert” standard on the same course. This indicates that a 300 percent improvement beyond expert qualification is possible. We will analyze three official U.S. Army qualifications and discuss how to triple your skill level beyond them. 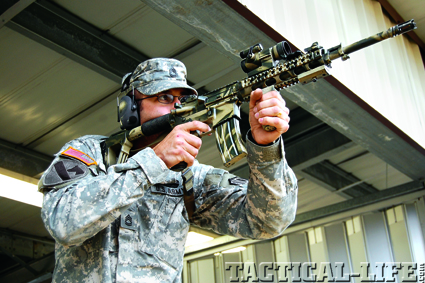 Military marksmanship training covers a variety of weapon uses but standards are often adjusted until everyone can pass. Qualification, even as “Expert,” is only the beginning. 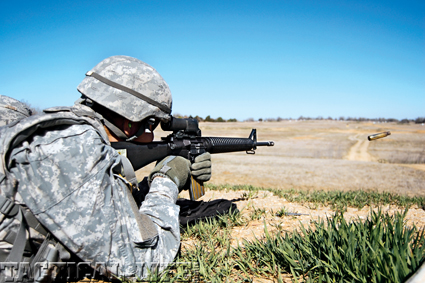 The military rifle everyone initially qualifies on is the M16-series. The smallest target engaged during typical qualification is an E-type silhouette at 300 meters. Soldiers will shoot this target scaled at 25 meters during zeroing, occasionally during the typical RETS (Remote Engagement Target System) “pop up” or Scaled Target “Alt C” (Alternate Course) qualification, or for half the shots fired on the Known Distance Record Fire Course. Measuring 19 inches across, which is shoulder width for a typical adult, makes for a target about 6 minutes of angle wide at the furthest distance engaged. During grouping exercises, two consecutive three-round groups are shot slow fire, prone supported and the six shots need be inside 6 minutes of angle, or 4 centimeters at 25 meters. The zero target, an E-type silhouette scaled to 300 meters, is transcribed with a 4-centimeter circle. Fired in the same manner as the grouping exercise, soldiers are considered zeroed if five of six rounds make it into that circle.