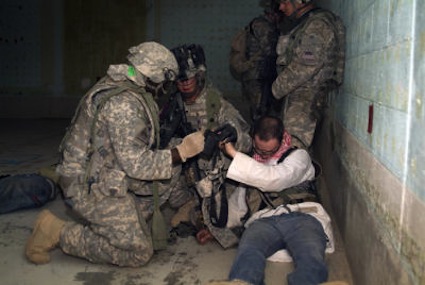 Soldiers testing Increment 1 of the Army’s Brigade Combat Team Modernization effort used WSMR’s former Range Control Building as part of a series of exercises to test the new equipment and tactics. The operations required the soldiers to operate in an environment similar to those found at advanced training centers like the National Training Center at Fort Irwin, Calif., to provide them with the most realistic environment possible when testing the new systems. Equipment used in the tests included: the small Unmanned Ground Vehicle, Class 1 Block 0 Unmanned Air Vehicle, Tactical and Urban Unattended Ground Sensors, and an overarching communications network that provides enhanced communications options to the soldier. Each of these systems provides Soldiers with enhanced war fighting capabilities, significantly improving their knowledge of the battlefield and the ability to communicate key situational awareness data. Via their interconnection to Network Integration Kits, these unmanned systems provide the communication backbone for Battalion Command Networks.

By including locations like Building 300 in the testing, the soldiers can better evaluate the new technology in a realistic, complex urban environment with terrain and features not normally available on military installations.

300’s location on the WSMR cantonment area incorporates many real-world concerns into the training and testing, such as electrical and radio interference caused by civilian infrastructure and electronics, and the physical hazards that an urban area has.