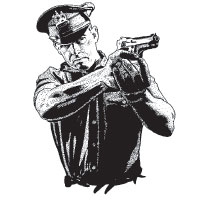 When the call came in it seemed very out of place on this calm Sunday morning. I often received calls of this nature on my beat. However, it wasn’t even ten o ‘clock yet and the bad guys traditionally slept late. I had been out in the housing development for several moments when my backup arrived. Meanwhile I’d found a very reluctant witness that pointed out the apartment the man had entered. Of course, it’s on the top floor, I moaned to myself. Why did the troublemakers always have to live on the top floor? So up the narrow steps we went. I led the way, as my fellow officer was not wearing her body armor. We had no witnesses willing to testify on the brandishing a firearm charge, but the heavy metal music blaring out of the apartment was a definite violation of our local noise ordinance, a class 1 misdemeanor.

I kept my back to the wall as I reached up to knock. The tiny landing was situated directly in front of the door and it was either stay on the stairs or stand in front of the doorway. At the time I knocked, the music consisted of a screaming singer making obscene exaltations to Satan himself. My first knock went unanswered. As per department policy our weapons were still holstered as we had seen no immediate threat. With my back still to the wall and knocking upwards with my left hand I unsnapped the security strap on my issue Smith & Wesson 5906. The second knock was interrupted as the door was jerked inward and a blue large-frame semi-automatic pistol was brought up towards my face.

What happened afterwards took only a split second but seemingly lasted forever. First I cursed loudly. Then I completed my draw while ducking under the weapon and shoving my partner down the stairs with my left hand as I spun to face the gunman. The night sights stood out brightly against his chest as I started to squeeze the trigger. His weapon was traveling in an upward arc, and as it came into the light for the first time I was able to see the muzzle pointing at me. As I took up the slack on my trigger I stared at his muzzle, his tiny little .177 muzzle. A B.B. gun, HE HAD A B.B. GUN! Thank goodness for the long trigger pull on that old Smith. I yanked my finger off the trigger, latched on to him and, following a short (my adrenaline was really pumping) scuffle, was handcuffing him as my partner entered, asking what had happened. She helped me remove him from between the stereo and the couch (I told you my adrenaline was pumping).

After taking him into custody on the brandishing a firearm, or object similar in appearance to a firearm, I found that he was soaking wet. His explanation punctuated by prayers to both God and Satan was that he had been in a nearby stream on SEAL maneuvers.

I obtained a mental detention order on the man and learned from family members that he had been off his medication for some time. At his trial he was a totally different individual. Bright, articulate and grateful that he had not been killed. Was I wrong for taking my eyes off the front sight and staring at his weapon? In theory, I believe I erred. In practice, I am grateful that I was given that last split-second chance to refrain from taking his life. Furthermore I am firm in my belief that there is much to be said for a long first trigger pull. It saved this man’s life.
­—DH, VA 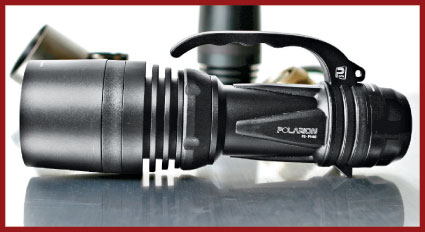 “Man with a nine!” When the call came in it seemed very out of…