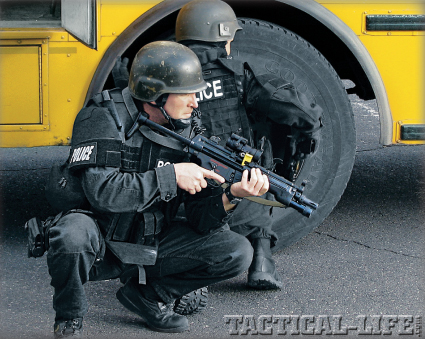 Spokane is a city of a quarter-million souls in the northeast corner of Washington State. It sits in the high desert, with 14 inches of rain per year, four distinct seasons, and temperatures from -10 to 105 above. It’s about 20 miles from Idaho and 80 miles from Canada. Spokane is a nice city, with golf, skiing, hunting, hiking, climbing, and river rafting all within an hour, in any direction. 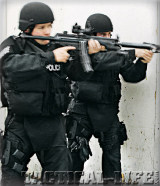 It is the largest city in a three-state, two-Canadian-province region, so it has all the problems of any similar-sized city: gangs, armed robberies, meth…all the usual.

Spokane is served by the SPD (Spokane Police Department), a force of 300 officers. SPD is a well-trained, well equipped department. Officers are armed with Glock 22 .40-caliber pistols, Remington 870 shotguns, and .223 patrol rifles, primarily Colt AR-15’s. A new policy will allow officers to carry personal pistols from a variety of designs, including the 1911. In addition to patrol, the department has a Tactical Team of 100 officers who are used for crowd control and other special events. When patrol and TAC need help, they call the SPD S.W.A.T. team.

Like most in the country, S.W.A.T. is made up of volunteers from every unit in the department. Like many teams, it started with a hunting rifle brought from home, a couple of shotguns, one AR-15, and a surplus panel van. In response to the changing face of crime, S.W.A.T. now has 24 operators, three training cadre, an assistant team leader, and is commanded by Sergeant Randy Lesser. They respond in specially equipped Suburbans, and uniforms are black BDU’s and ballistic helmets. The officers are highly motivated, very fit, and very loyal to each other.

Operational settings for Spokane S.W.A.T. can vary from deep woods to high-rise buildings. One recent mission required a two-mile hump into a wooded area, overnight LP/OP duties, and ultimately stopping the suspect with rifle fire when he tried to run over officers on a logging road.

The team comprises four squads, each with a squad leader. Within the team are six counter-snipers, four medics, and four chemical agent and less-lethal trained officers. The team motto, “We give it R. Best,” is in memory of a hostage negotiator who trained extensively with S.W.A.T. As the largest team in the area, SPD S.W.A.T. is often called to assist the county, the Idaho State Police, Washington State Patrol, and several federal agencies. Although S.W.A.T. has detectives assigned to the team, forensics and investigations are handled by non-S.W.A.T. officers after the mission is over—S.W.A.T. is not an investigative tool.

Effective Tools and Training
S.W.A.T. is armed with the standard-issue Glock 22, and each officer is issued a second G22 with a SureFire light. The issue carbine is the select-fire Colt Commando, and HK MP5 submachine guns are issued to each team member. The MP5’s use an Aimpoint Comp 2 sight. Optic for the Commando is officer-preference, and consist of Aimpoint, Eotech, Leupold, and ACOG’s. The team shotgun is the Remington 870, with an AR-type stock and breaching stand-offs attached to the muzzle. These shotguns are loaded with the TKO round, for breaching and lethal application on entry. The team also has HK 33’s, 53’s, G3’s, and Mini-14’s.

Each team member must cross-train with every weapon, and can be suspended from the team if they fail to qualify. Less-lethal ordnance is delivered with the 870 shotgun and the 37mm: Bean bag, baton, and sponge rounds are all carried. Gas is used often and heavily, delivered by 37mm and by hand. They have had only one duty-related malfunction in any weapon system, in spite of having used all of the weapons mentioned. The problem has been with light-mounted Glock 22’s. Team leader Randy Lesser notes, “…we’re having multiple malfunctions, and one possibility is a lack of frame flexibility once the light is mounted. The FBI suggests using a lower-velocity 165-grain load, rather than the 180 grain JHP currently issued, and we’re waiting for a test batch of CCI ammunition for evaluation. Our research shows that this problem isn’t unique to us, so we’d welcome information from anyone with an answer.”

The sniper rifle, new in 2008, is the H-S Precision Pro Series heavy tactical rifle with a green/tan camo finish. The rifles are chambered in .308, and the 165 Tactical round is standard issue. Each rifle is equipped with a Harris bipod, but half of the snipers prefer to shoot off a rucksack. The guns are equipped with the Leupold 3×10 Tactical. One shooter is testing the 6×24 Nightforce, and night vision scopes in a QD mount can be used with the rifles.

Like all teams, the search for better gear and tactics is constant. The team is currently testing 1911 pistols, and silencers from Advanced Armament for the Commando, 1911, .308, and special-purpose guns in .22LR. Ammunition issue has been reduced slightly in recent months, due to low supply and high costs, especially in 5.56 and 7.62×51. The decision to allow personal handguns will raise training issues, especially after years on the Glock 22. However, two of the team members are state-certified master firearms instructors, and 16 hours of transition training will be completed prior to authorization of any individual handgun.

Qualifying For Special Duty
Joining S.W.A.T. is not easy. A minimum of three years on the department is required, after which an application may be submitted. Applicants must supply a recommendation from their immediate supervisor, clearance from the shift commander, and clearance from IA (Internal Affairs). When a position opens (not often), applicants begin with a PT test, a good screening tool for S.W.A.T., as if applicants lack the drive to get into shape, they lack the drive to excel.

SPD’s PT test is the toughest test in Washington State, and most applicants fail the first time through. Applicants begin with a 3-mile run in 24 minutes. This is immediately followed by 10 pull-ups, 15 dips, 50 sit-ups and 50 pushups, with no rest between. Then it’s outside, into heavy entry armor, and a run through the obstacle course. Since they are now warmed up, they run to the range and fire two handgun qualification courses, each with a 90% score.

Each applicant then faces an oral board. The team leadership asks questions, with the entire team present. After the standard questions are asked, each team member is allowed to question the applicant. There is no formal black-ball process, but team members know that each of them must get along with the applicant, and consideration is given to objections by the team members. If selected, the applicant is on probation for six months, during which he can be told to turn in his gear at any time.

To maintain their high entry standards, team members train a minimum of 20 hours per month. Training may be compartmentalized, with snipers and knuckle-draggers each pursuing their specialty. Training scenarios are determined by the team leader, based on evolving needs and situations faced by the department. Team members are cross-trained in the duties of other members—a sniper can easily become an entry man.

Sniper training is every other week, four hours per session. Sniper training begins with the cold bore shot, then a three-round group. Shooting varies from 50 yards to 500, and through common obstacles like glass. Team members also act as instructors for firearms, defensive tactics and other topics for the department as a whole. In addition to monthly training, the entire team conducts a “hell week” each year comprising 70 to 80 hours over five days to test abilities to operate under stress and adverse conditions.

K-9 Partners
The team relies heavily on K-9 use in S.W.A.T. There are currently three S.W.A.T. officers whose normal duty is K-9 handler, so dogs are closely integrated into the team. The dogs can be used for outdoor searches in the wooded parts of the city, building searches, and so on.

SPD’s team has been active for 36 years. In 2008, the team was called out 62 times. The calls were the full spectrum of typical S.W.A.T. calls: barricaded gunmen, drug raids, searches, and warrant service. In the 36 years, the team has only fired on three call outs: S.W.A.T. 3, bad guys 0. Of course, many of the S.W.A.T. officers have been in shootings while on patrol or during investigations. The team has never had a team member killed. In the recent past, the area was home to several militias and supremacist groups, one of which did several armed robberies. The team trains extensively to combat well-armed “takeover” robberies.

In addition to their regular duties, S.W.A.T. personnel participate in citizen academies, where the mission and gear of S.W.A.T. are explained, and include a question and answer session. One citizen-academy graduate allowed a team sniper to use her house on an actual mission, feeding him sandwiches and hot chocolate while other team members had ice forming on their helmets! Team members also provide recruit and in-service training to agencies across the state.

The members of SPD S.W.A.T. are highly competent, dedicated professionals. Randy Lesser is a leader, not a manager. These guys are the real deal.