0
SHARES
44
VIEWS
Share on FacebookShare on Twitter
This isn’t staged for a photo op! Here St. Louis SWAT is in full swing with a ram followed by a flashbang to gain entry. Together, the flashbang and speed of the assault resulted in no resistance or injuries.

As the St. Louis Metropolitan Police SWAT team rolled along in an armored BearCat in route to the target house, verified to contain a wanted felon, I wondered how the operation would go down. The team brief included reliable intel that the persons inside were known to be armed and had a history of resistance, so although not anticipated, there could be trouble. As I sat with the team as the BearCat bumped and turned down St. Louis’ streets, their relaxed comments showed that they were confident in their training, equipment and each other. One of the officers got a laugh when he told me that, as the new guy, it was tradition to hold my wallet until after the operation.

They knew the stack order and clearing plans. They just snapped their chinstraps and made sure their Magpul magazines were fully seated as we neared the target. Quietly and quickly, the team moved from the armored vehicle and stacked by the front door as designated operators covered overlooking windows and doors with their Specialized Tactical Systems (STS) carbines. The shouted warrant announcement, the crash of the ram and the pop of the flashbang were quick, as was the practiced, orchestrated entry of the team that flowed through the front door of the suspected crack house. Contrary to the prior briefing, but common with successful dynamic entries, no shots were fired as the occupants were quickly controlled without harm. 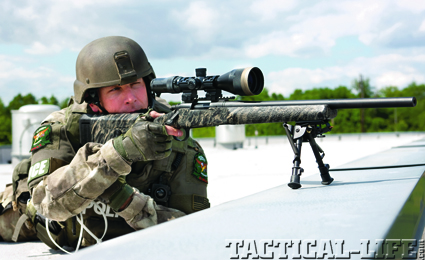 The practiced dynamic entry of the well-trained SLMPD SWAT team actually reduced the chance of violence as it quickly surged through the house. The paralyzing show of force ensured no chance of bad guys collecting their thoughts, organizing any resistance, or offering anything but enhanced confusion. The team, who serves hundreds of warrants every year, uses a combination of professionalism, continuous training, and excellent equipment to maintain an almost-perfect record of serving warrants with no injury to themselves or the perps. Soon, the still-dazed ex-occupants were safely restrained as other officers took over and the SWAT team took off to serve another warrant, another entry. 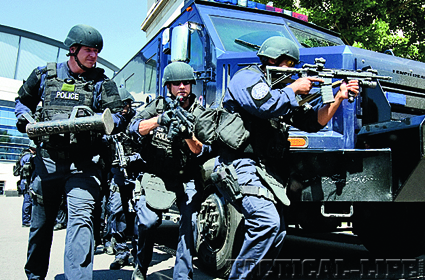 During the author’s visit to St. Louis, he shot video during his ride-along.

One of the key elements of their gear—and the foundation for the confidence of the SLMPD SWAT team—is their new 5.56mm NATO carbine made by Specialized Tac­tical Systems and topped with a rugged Aimpoint red dot sight. The STS Titan is an enhancement of the Eugene Stoner-designed AR, now the longest-serving battle rifle ever fielded by the U.S. military. Features of the STS Titan include a two-stage match trigger, KNS anti-rotation pins and a rounded triggerguard made for gloved use. STS understands that what they make could go right into a tactical situation, so every firearm is built, individually tuned and tested before leaving the factory. Each gun is ready to go right out of the box, with no “break in” required.

Why another AR? STS considers their firearms the Ferrari of the AR market. The company feels that there are “two types of people who purchase Ferraris, guys who appreciate craftsmanship, quality and want the best, and professional drivers who ‘outdrive’ their current vehicle and need a car that keeps up with their skill set. As Ferrari is to the automotive industry, so is STS to the weapons industry.” As a result, STS weapons are used by many special operations personnel and operators in the United States and worldwide.

The STS Titan that the SLMPD SWAT uses has the long-stroke piston system similar to the AK for higher reliability and heat reduction. Based on independent thermography studies I conducted, I have found that the gas piston system, compared to the traditional gas impingement system on an AR, will reduce the felt heat on the forward handguard by at least 10 degrees and not let it get too hot to handle. This is better than even the AK, which I have seen smoke and char the forward handguard during sustained fire. In addition, the gas piston system keeps the bolt carrier much cooler, so it virtually eliminates the possibility of a round cooking off and allows the rifle to be broken down for maintenance or cleaning without a long cooling-off period.

Led by Colonel Daniel Isom, Chief of Police, the primary mission of the SLMPD is to protect the lives of the citizens they are sworn to serve, even if it puts them in harm’s way or at deadly risk. By doctrine and through practice, the officers use the highest degree of care even when faced with violence and weapons, as evidenced in 2010, when there were approximately 464 incidents where SLMPD officers were met with weapons. Over 400 of those incidents were resolved with no injuries, a percentage greater than 87 percent. 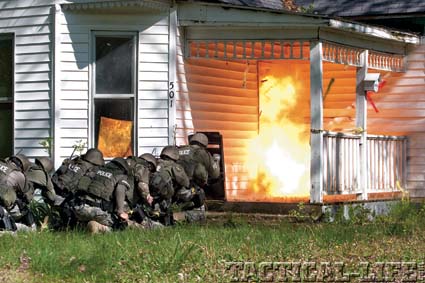 There’s no barricade too great—the St. Charles County Regional SWAT team is trained and equipped for the precise application of explosives to gain entry into structures or rooms.

The SLMPD patrol area has urban, suburban and green areas within its nine districts, so their officers have to be trained to operate day or night, in all environments. On any given day, some 1,300 officers can be expected to respond to high-rise offices or businesses, private homes and apartments, or operate in lush Forest Park. The metropolitan St. Louis area has many problems familiar to any big city, with crimes against persons and property, drug manufacturing, sales and use, as well as gangs vying for control of specific areas. The department has separate units for Traffic Safety, Mounted Patrol, Sex Crimes, Child Abuse, Domestic Abuse, Mobile Reserve/Hostage Response, Anti-Crime Unit, Bombing and Arson, Homicide, Auto Theft, Intelligence, Vice/Narcotics, Asset Removal, Cyber Crimes, Major Fraud and Tactical Enforcement. However, not every SLMPD event is tactical; some are social to directly benefit the community. St. Louis officers have partnered with local businesses and charities to host recent events that gave St. Louis seniors and children everything from winter clothing to a pizza party.

The full-time SLMPD SWAT team is comprised of 16 officers, two sergeants and a lieutenant. The unit has three 2-man sniper/observer teams, breachers and several other specialties, with most members cross-trained for efficient use of manpower. The SLMPD SWAT team periodically trains and certifies their own members using SWAT officers as instructors and cadre with curricula and standards approved by the Missouri Department of Public Safety’s Peace Officer Standards and Training (POST) Program. The SLMPD SWAT School (SWAT 1) teaches volunteer patrol officers the basics of SWAT equipment, basic tactical operations and command and control to the officers, who then return to the streets.

Even if they do not go on to become members of the SWAT team, the tactics the officers are taught help them to be better law enforcement officers in the field. When a vacancy occurs on the team, the SWAT team can pick from patrol officers already qualified who then apply to join the team. The selection process involves passing a firearms qualification course, a demanding physical training test and an interview with team leadership. Once selected for the team, the learning really begins, as each officer is not allowed to perform SWAT duties like forced entries until they have shown proficiency as an operator and successfully passed both SWAT 1 and SWAT 2 classes. The SLMPD advanced SWAT classes (SWAT 2) teach advanced tactical operations, high-risk warrant service and hostage rescue.

Overall, the SLMPD SWAT team is the tip of the spear for high-risk law enforcement tactical operations for St. Louis Metropolitan Police. Always on call and with a history of effective operation, the members know that they will be going into harm’s way and fully appreciate that they have been given effective tools like their new STS Titan carbine.

The STS Titan was recently given its baptism by fire in the hands of SLMPD SWAT during a narcotics search warrant entry. The SWAT team arrived, organized and moved from the street into a stairway within the structure, just adjacent to the room the perp was believed to be in. The warrant suspect confronted and engaged the entry team as the team got to the top of the stairs of the two-story flat. Forced back, the gunman then retreated into a room where he held a woman and infant hostage.

Ignoring commands from the team to disarm and surrender, shots from the gunman ripped through a door and wall the team was using for cover. Responding with great restraint, three SWAT officers used their STS carbines to return limited, precision fire for a total of eight rounds. The few rounds fired by the officers suppressed any further shooting by the gunman, allowing the team to re-deploy out of the line of fire and allow negotiations to begin for the release of the hostages as well as for the perp’s surrender. The officers appreciated that their new carbines worked flawlessly and with great accuracy, allowing them to control the situation, which ultimately ended with no bloodshed and a release of the hostages, including the infant, unharmed and healthy.

SLMPD SWAT officers are willing to stake their safety on STS Titan carbines every day, as they already have done. The pairing of the STS Titan with the St. Louis Metropolitan Police SWAT team is a perfect match, as both the SWAT officers and STS understand that their weapons could mean the tactical edge in a firefight—and they take that responsibility very seriously. For more information, visit specializedtactical.com or call 801-648-7004.