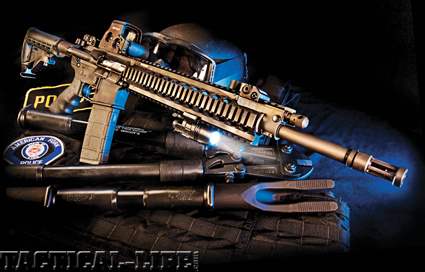 The Ruger is well equipped from the factory. Simply add a sling and optic of your choice and you are ready for the next callout.
Comment(s)

While it is certainly true that smaller departments do not face all of the problems a big agency experiences, the idea that “all cops are the same” and “policing is the same everywhere” strikes me mostly as political rhetoric. Parts of the day-to-day job may be similar, but working as a police officer in a 15-man department is not the “same” as a 35,000 man department. Each faces their own set of challenges, some similar, many completely different.

One of the challenges faced by many smaller police departments, is dealing with big-city crime with small-city assets. Two of the areas where this has very significant impact are training and tactical deployments. Large departments often have training divisions as contrasted to a smaller agency that likely does not even have training officers. That is something an officer does in conjunction with the rest of their duties. The same is true for S.W.A.T. teams. Watching the various television shows you would think everyone has a dedicated S.W.A.T. team with vans, ‘copters and tanks. That is simply not true. Most do their job and train for it when they are not “on duty.”

As large as the state of Utah is, even the largest departments in the state do not have dedicated full-time teams. Yet, when confronted with a need for a trained officer or team the situation makes no distinction. Given a hostage situation or barricaded subject the victims don’t care whether you have a full time team and the training that goes with it, you simply must do what is needed. For some, that is a unified team, or a team comprised of officers from various agencies who train and deploy together. In some instances an agency simply has an inter-local agreement to use another agencies’ S.W.A.T. team. Both of these models work for various agencies, but others want the control that comes with having your own unit. It gives you control as a local agency in critical situations and is the direction many agencies have gone in the last 10 years or so. American Fork Police is one of those agencies.

American Fork started much the same way our team did years ago. In 1992 they had five officers trained as a small-unit entry team. They trained with another local team, in fact the same team we started with. Lance Call, the Chief of Police for American Fork, was a member of that West Valley Police S.W.A.T. team. West Valley Police was instrumental in the training and genesis of our S.W.A.T. team as well. It is this kind of help and assistance that is at the heart of teamwork.

As a S.W.A.T. officer, it is always nice to see another tactical officer make it to the Chief’s spot. Our own Chief Chris Snyder was one of our founding S.W.A.T. team members. His experience and expertise has been instrumental in allowing us to grow, just as certainly as it will be the case with Chief Call. It really helps when the guy at the top actually has been there and done that when it comes to tactical operations. This very training is a perfect example, as it was with Chief Call, who was able to secure new weapons and equipment in order to move the team forward to meet emerging challenges. 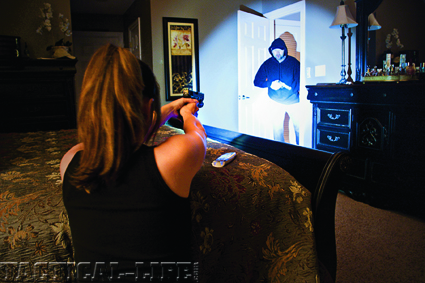