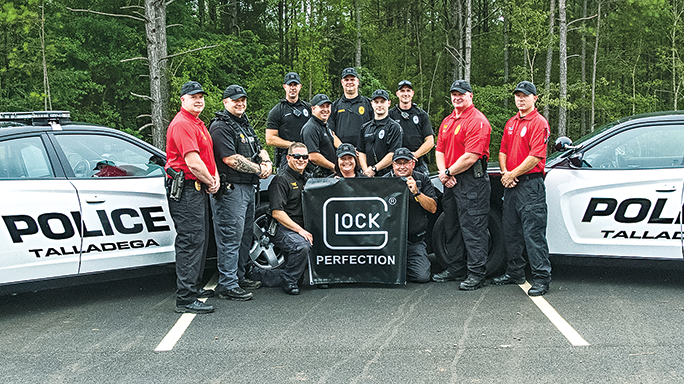 1 of 5
Photo by EDWARD TYLER
Titans of Talladega: Talladega PD Turns To Glock 41 Gen4
Whatever their assignments or uniforms of the day, all Talladega police officers confidently carry the G41 Gen4 with its 13+1 rounds of .45 AUTO ammo on tap. 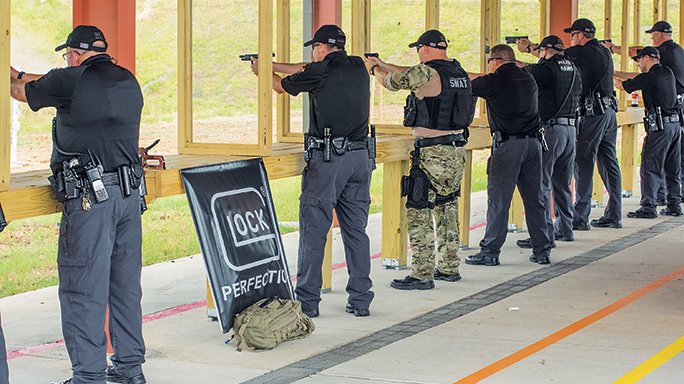 2 of 5
Photo by EDWARD TYLER
Titans of Talladega: Talladega PD Turns To Glock 41 Gen4
Officers of the Talladega Police Department train with their new .45 AUTO GLOCK 41 Gen4s. These pistols were chosen because of their power and longer sight radius. 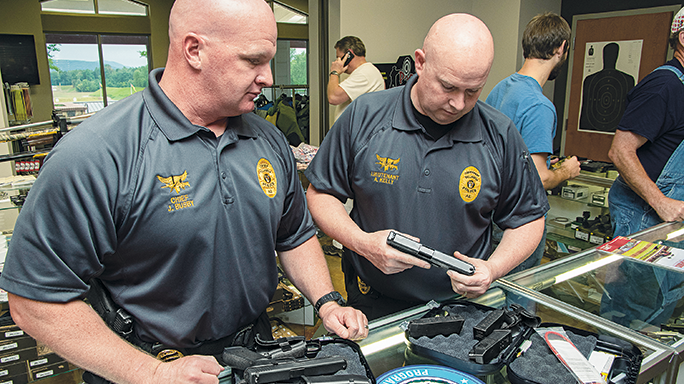 3 of 5
Photo by EDWARD TYLER
Titans of Talladega: Talladega PD Turns To Glock 41 Gen4
TPD armorers have been happy with the department’s issued GLOCKs because of how easy they are to maintain. 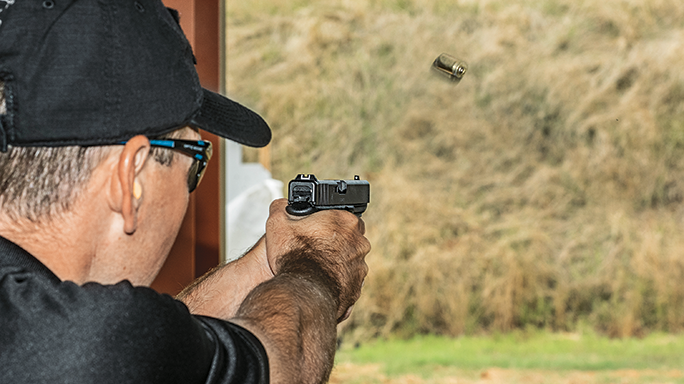 4 of 5
Photo by EDWARD TYLER
Titans of Talladega: Talladega PD Turns To Glock 41 Gen4
The GLOCK 41 Gen4’s 7.56-inch sight radius makes it easier to zero in quickly and track between multiple targets. 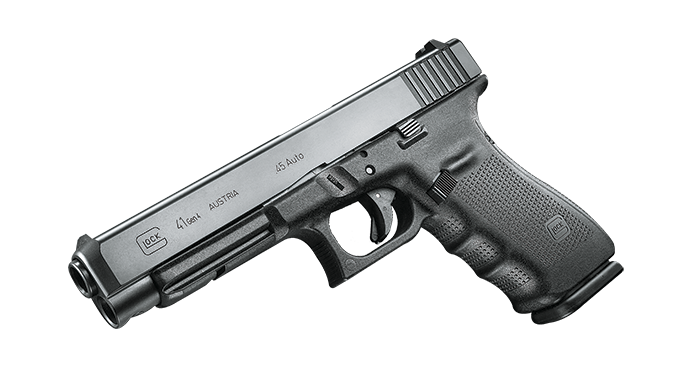 5 of 5
Photo by EDWARD TYLER
Titans of Talladega: Talladega PD Turns To Glock 41 Gen4
The Gen4 frame makes it easy for all of the department’s officers to find the perfect firing grip. 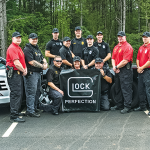 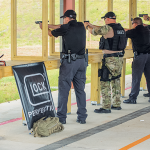 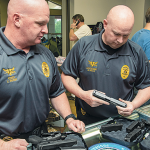 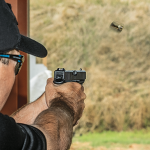 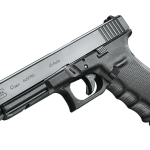 Home to one of the world’s most famous automobile racetracks, Talladega, Ala., is an historic community of about 16,000, and far more on race days.

According to Talladega Police Chief Jason Busby, “Our department receives a large number of calls for service based on our city size, and our crime rate is moderately high. Talladega was primarily a manufacturing or ‘mill city,’ and over the past 15 years much of that industry has been hard hit due to the economy.” That makes the Talladega Police Department (TPD) what some in law enforcement call a “busy shop.”

Chief Busby commands a force of more than 50 sworn personnel. A firearms instructor and former SWAT officer himself, he has a keen awareness of what makes a good service weapon. He and Lieutenant Alan Kelly, the department’s training coordinator, report that as of May 2015, the department has transitioned to a new service pistol—the GLOCK 41 Gen4 in .45 AUTO.

The G41 Gen4 can be seen as an extension of another GLOCK pistol that has been around for a quarter-century now, the GLOCK 21. The G21 has become the single most popular .45 AUTO pistol among American law enforcement.

The G41 Gen4’s longer sight radius combines with its narrower slide to allow shooters to track between multiple targets just a little bit faster than with a shorter, wider pistol. Moreover, the G41’s Gen4 designation means that it has a reversible magazine catch that can be switched to the opposite side for left-handed shooters, and a grip frame redesigned to shorten the distance from where the web of the shooter’s hand would rest against the backstrap of the frame. This results in better reach to the trigger for those who have small hands and short fingers. The G41 Gen4 and other Gen4 GLOCKs come with interchangeable backstraps that can extend the trigger-reach dimension for shooters whose hands are larger. Thus, the Gen4 better serves as an issued weapon for a force of officers whose hands might vary dramatically in size.

Chief Busby’s 20 years of law enforcement experience include working as a patrolman, a field training officer, a sergeant, a lieutenant and a SWAT team member. He recalled, “Talladega PD started with 9×19 pistols exclusively. The pistols themselves were not issued, but were purchased by the individual officers from a list of approved makes and models. Looking back at our officer-involved shootings, we were not happy with how that caliber performed. From 147-grain subsonic to 115-grain +P+, the department just didn’t think the caliber was enough. The chief here 10 years ago decided that uniformity would be a good idea, so we selected one pistol to issue to all our armed personnel. That pistol was the GLOCK. Because we wanted something more powerful than what we had been using, we chose the .40 caliber. We bought
the GLOCK 22.”

The chief continued, “One of our concerns came from the fact that we police an area that is primarily urban but also encompasses farmland. This means that it occasionally becomes necessary for our officers to euthanize large, aggressive animals. We did not find the 9×19 pistols to be satisfactory for this. After 10 years with the .40-caliber GLOCKs, when it came time to look at purchasing new service pistols, we wanted something more powerful.”

Few law enforcement agencies in Alabama issue .45 AUTO pistols, but many authorize optional pistols in that caliber. The TPD reached out to agencies that had used and were using a broad variety of handgun calibers, and it appeared that those officers with .45 AUTOs were more satisfied than those with smaller calibers.

Lt. Alan Kelly, the TPD training coordinator, confirmed this. “Talking with other departments that had .45 AUTOs, the consensus was that the .45 AUTOs were more satisfactory than other calibers.”

While other makes were looked at, GLOCK was the favorite from the beginning when the new gun selection process began. “I thought at first we’d be going with the GLOCK 21, but everyone who compared the two said they liked the G41 Gen4,” said Lt. Kelly. “I think the real reason for the preference of the G41 Gen4 was ‘more barrel.’ We like our pistols longer and our rifles shorter in the tactical world. Many of our SWAT guys were carrying GLOCK 35s when we had the .40s. We like the sight radius on the longer GLOCK 41 Gen4. I got a G41 Gen4 as soon as they came out, took it to the range and fell in love with it.”

The department’s transition to the G41 Gen4 began in April of 2015 and was completed in May. According to Chief Busby, “All our armed personnel are carrying the GLOCK 41 Gen4, including detectives and supervisors. No exceptions. Polymer security holsters are issued to both our uniformed and plainclothes personnel. Some are also using weapon-mounted lights—not all of them, but many—and I encourage the practice but leave it up to the individual officer. Each officer carries two spare 13-round magazines, and I’ve authorized them to carry more than that if they wish. The issued ammunition is Remington’s 185-grain +P hollow points.”

Today, the chief reports, the working cops in Talladega are happy with their new, long-barreled GLOCK .45 AUTOs. “The perceived recoil is generally less than that of the .40,” he said, and added that he has been very happy with the shooting scores of those under his command. The Gen4 features have been welcomed, too. “We have several left-handed officers, so the Gen4 reversible magazine catch was a hit,” said Chief Busby. “We have two guys with huge hands who struggled with their previous guns but love the Gen4 with the largest backstrap. One’s score jumped 10 points. He said, ‘It fits now!’”

It certainly helps a department’s firearms training program if the chief is a firearms instructor himself. The new G41 Gen4s join an armory that includes shotguns and patrol rifles, as well as a strong recommendation for officers to carry concealed handguns to backup their service pistols. Based on wide-ranging research that included testing multiple handguns, reviewing the department’s own officer-involved shootings and reaching out to other departments to find what has worked best for them, the TPD has taken a wise approach to its selection of a new duty handgun. The department’s choice, the GLOCK 41 Gen4 in .45 AUTO, is already serving it and its community well. 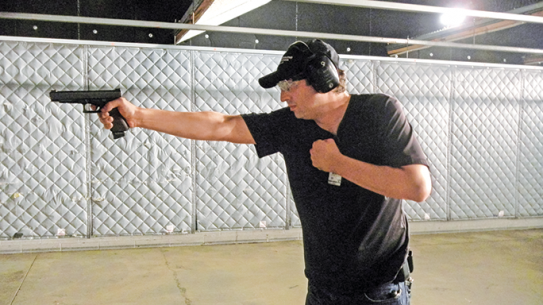