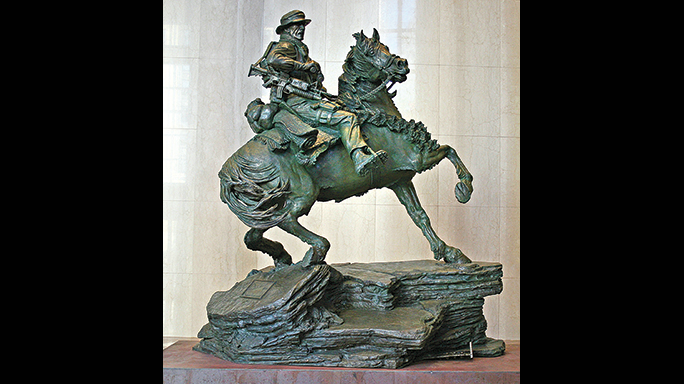 Informally known as the Horse Soldier Monument, the life-and-a-half bronze statue, funded by an anonymous group of Wall Street bankers who lost friends and colleagues in the 9/11 attacks, sits in front of One World Trade Center. It is the first public monument dedicated to American Special Forces, many of whom became surprisingly adept in the saddle, even coming to appreciate the ability of horses to get them into terrain inaccessible to motorized vehicles.
Comment(s)

Based in Uzbekistan, in a former Soviet airbase near Karshi Kandabad, Task Force Dagger was a series of operations mostly involving 12-man ODA (Operational Detachment–Alpha) teams from the Army’s 5th Special Forces Group (the group assigned to the Middle East), aka the Green Berets, that were inserted into Afghanistan to assist Northern Alliance forces in identifying targets for surgical strikes by U.S. warplanes.

ODA 555, mentioned previously as part of Operation Jawbreaker, was the first unit in Afghanistan in October 2001 and worked closely with warlord Fahim Khan of the Northern Alliance to call in airstrikes against Taliban positions on the Shomali Plain; ODA 595 was instrumental in bringing American airpower to bear in eliminating the Taliban from Bagram Air Base and then from the Afghan capital of Kabul, which fell to Khan on Nov. 13, 2001.

Eventually five more ODAs (585, 553, 586, 574, 583) would assist in bringing critical American air power (B-52s and B-1 bombers; Navy F-14 and F/A-18 attack aircraft; AC-130 gunships; MC-130E/H aircraft) to bear in the Dari-a-Souf Valley, Mazar-e-Sharif, Kunduz, the Bamiyan Valley, Taloquan, and finally the entire Kandahar province, which spelled the end of the Taliban, who fled to the mountains of Tora Bora or into neighboring Pakistan.

In every instance, the forces of the Northern Alliance were accompanied by the Green Berets, as well as a smaller number of CIA SAD agents.

In at least one instance, while attached to the forces of Northern Alliance General Dostum, the Americans were required to ride on horseback in spite of being ill prepared for such a mode of transportation, not to mention for the discomfort of the traditional wooden saddles commonly used in Afghanistan.

The combination of U.S. air power, Afghani muscle on the ground, and American intelligence operating as the key connection between the two produced a rapid defeat of the Taliban and its Al Qaeda allies during Task Force Dagger’s operations. Governing Afghanistan in the aftermath would be another matter.

CAA's RONI Civilian features a 16-inch barrel and is not regulated by the NFA,...