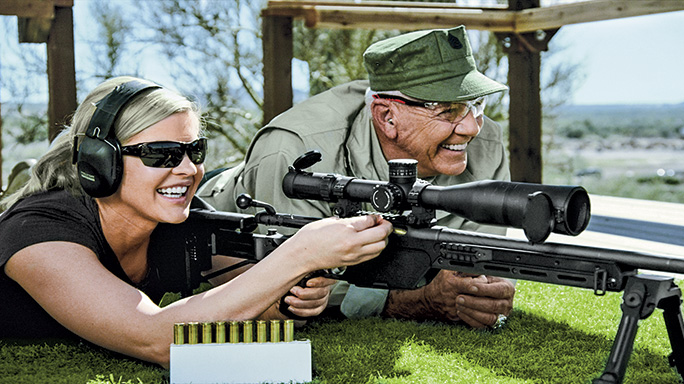 1 of 2
The Gunny: Softening the Hard Corps with Political Correctness
Theresa Vail shoots with The Gunny. 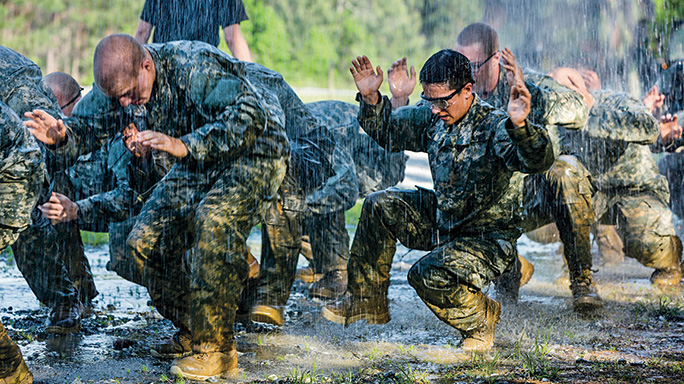 2 of 2
The Gunny: Softening the Hard Corps with Political Correctness
U.S. Army soldiers slog through mud and rain at Ranger School. 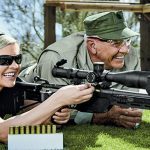 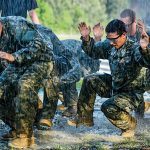 When I first shouted these words in Full Metal Jacket back in 1986, they were coming from the character I was playing in the movie, Gunnery Sergeant Hartman. However, they were also coming straight from my own guts, from R. Lee Ermey:

“Because I am hard, you will not like me. But the more you hate me, the more you will learn. I am hard, but I am fair … Here you are all equally worthless! And my orders are to weed out all non-hackers who do not pack the gear to serve in my beloved Corps! Do you maggots understand that?”

I had spent years training Marine recruits and had a sight picture of the mission as certain as crosshairs centered on a target. At the height of the Vietnam War, in the mid-1960s, I had trained hundreds of troops to go into combat. I knew what it took to get them ready.

Lately, I have found myself reflecting on all this in both a sentimental way, remembering times good and fun, but also thinking about my beloved Corps with concern about today’s recruit training. I hope it’s not being watered down with political correctness.

My thoughts have turned to the training mission this past year because of two events. First came an eye-opening experience of having a most unusual female soldier on my GunnyTime TV show. She was Army National Guard Sergeant Theresa Vail, Miss Kansas of 2013, who not only made me prouder than ever of my home state, but brought along a very special sniper rifle—the Russian bolt-action Mosin-Nagant in 7.62x54R. She put on a demonstration of how the Russians had trained women as snipers against the Nazis in WWII, using the Mosin-Nagant rifle. One Russian woman sharpshooter, Liudmyla Mykhailivna Pavlychenko, had 309 confirmed kills. Theresa’s dad was an Army veteran of 33 years, and she grew up playing with bullets instead of Barbies. She’s a hunter and a great shot, as she demonstrated on the show with me.

In my eyes, Theresa’s attitude and skills made her the kind of soldier any non-com or officer would love to have in their outfit. My enthusiasm over what could be accomplished by women in uniform was still running high after doing the show with Theresa when news reports came flooding in, raining on my parade. There was trouble in my beloved Corps. Trouble where it immediately brought me to stand at attention—in recruit training.

The Marines had sacked the CO of the only all-female recruit battalion at the Recruit Depot at Parris Island, South Carolina. The Marines operate Recruit Depots at Parris Island and San Diego for both men and women. However, unlike the Army, female Marine recruits do not train with the men. Obviously, the firing of the leader of such a key military post was bound to get a lot of media attention. And it did!

The CO of the 4th Recruit Training Battalion was Lt. Col. Kate Germano, an 18-year veteran. She was relieved because a command investigation found her to be “hostile, unprofessional and abusive.”

An article in the Marine Times by Hope Hodge Seck said, “But officers who served with her say she was a blunt reformer who spearheaded efforts to improve recruit training regardless of gender, and that a vocal minority in the battalion undercut her achievements.”

What’s going on? Is the Corps pushing tough recruit instructors out the door? Would Gunnery Sergeant Hartman, so tough in Full Metal Jacket, get the axe today? Before incoming fire starts hitting my position, let me say loud and clear that I do not represent anything official about the Marine Corps. My comments and opinions are simply the thoughts of one Marine, a lot older than the Devil Dog I once was but still a Marine in the same way that everyone who takes the oath remains a Marine until the
day they die.

From what the Gunny sees from articles like Hope Hodge Seck’s, there were distinctive improvements in the performance of Lt. Col. Germano’s recruits. In her words, making them, “Stronger, faster, smarter and better shots.” Excuse me, but isn’t that what it’s all about?

Under Lt. Col. Germano, however, some recruits felt they were being bullied and singled-out for under-performance.

So, some recruits are upset by the language used. Isn’t that sad? All I can say is that they have no business being in the Marine Corps. They belong in another branch of service where you don’t have to face and kill the enemy. We’re trying to train Marines who will be under fire and have to kill people. You can’t do that with Boy Scout training. It has to be rough, challenging, so much so that its completion leaves the individual with not only the skills and motivation needed for combat, but the pride of achievement.

It seems to me that Lt. Col. Germano wanted to make her troops more competitive, raise the bar on fitness, skills and motivation. I certainly do not have all the “official” facts, but she sounds to me like the kind of officer I would be proud of serving under—any time, anywhere. Just as Sergeant Theresa Vail is the kind of soldier I would love to have in my outfit. Matter of fact, the only way I can imagine Theresa Vail becoming even more outstanding would be for her to become a Marine!

EDITOR’S NOTE: On a related note, TW gives a hat tip to 1st Lt. Shaye Haver and Capt. Kristen Griest, who recently made U.S. military history by being the first females to graduate from the 62-day Ranger School at Fort Benning. 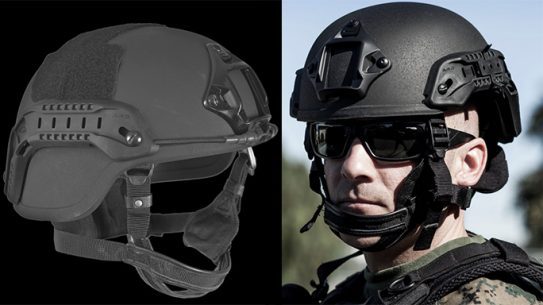