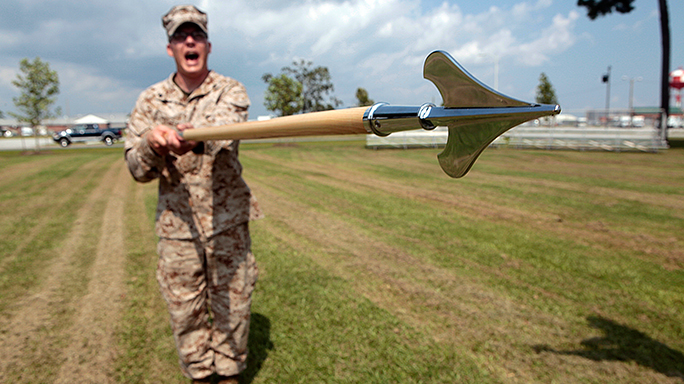 A student "presents guldon" during a three-week course focusing on the traditions and leadership of Marine Corps corporals.
Comment(s)

In recent years, my beloved Marine Corps has worked its way through issues like LGBTs, in the military and women in combat. But these brushfires are trivial compared to the tasks facing the Marine Commandant—and indeed all top military leaders—over our disappearing cadres of NCOs, the men and women in small units who make the right things happen, 24/7, on every mission.

Corporals and sergeants—the NCOs—are the backbone of our Marine Corps and Army small-unit combat operations. They are the vital link between the commanding officers and the troops who will be carrying out their unit’s mission. And right now, they are disappearing.

The problem is so severe that it has recently brought our top Marine and Army generals to speakers’ podiums. Only a month before he was named to head the combined Joint Chiefs of Staff, Marine Commandant General Joseph Dunford told the Navy League’s Sea-Air-Space Exposition that the Marine Corps needs to boost the number of sergeants and make up for a lack of experienced small-unit leadership.

The current number of NCOs in the ranks “does not meet our force structure requirements,” General Dunford said. “My primary focus now concerns our enlisted leadership.” He indicated changes are coming within the Corps to make up for the NCO shortfall and increase the experience and training of small-unit leaders.

These are the numbers he cited: About 60 percent of the current 190,000 Marines are on their first enlistment, and 40 percent of the Corps is ranked below E-3 (lance corporal). General Dunford said a sergeant shortage was a major factor in a reduced state of readiness of stateside Marines, which he pegged at about 50 percent. It’s an area of real concern for General Dunford. “Given the increased number of threats in the Middle East and Eastern Europe, we approach the future with humility.”

That’s straight-from-the-shoulders talk by our top Marine, an infantry officer with a an outstanding triple-edged record as a combat-hardened commander of the Afghanistan war coalition, top military schooling and master’s degrees in government from Georgetown University and international relations from Tufts. He is 59 and a graduate of the U.S. Army Ranger School and the Marine Amphibious Warfare School. He is the son of a retired Boston police officer who served in the Marines in Korea.

Prior to General Dunford’s speech, Army Chief of Staff General Ray Odierno told an AUSA Institute symposium, “The unrelenting budget impasse has compelled us to degrade readiness to historic low levels…What keeps me up at night more than anything else is that I might get a mission to send some of our soldiers and we haven’t properly trained them or given them the right equipment to do their job.”

Your Gunny has not chosen the word “backbone” in a haphazard way to describe the Draconian cuts being faced by these top generals. (Cuts that will be even more severe if sequestration occurs in 2016!) The word pops into my mind quite often because it is the title of the book I have recommended more than any other over the years since it was first published in 2011. Writer Julia Dye’s Backbone: History, Traditions, and Leadership Lessons of Marine Corps NCOs focuses on the roles of NCOs in actual boots-on-the-ground situations. She shows how these leaders evolve over time and how their decisions and actions become game-changers in the face of danger and difficulties of all types. If you’re interested in the subject of leadership and don’t check out Backbone, your coconut isn’t screwed on right.

General Dunford has formed a task force to study the NCO situation, and he and the Corps will need all the facts, inspiration and wisdom they can bring to bear on the current problem. Excuse the “I told you so!” rant, but it’s a fact that your Gunny has been harping on this subject a lot in recent years. In the manpower cuts we have endured, we have seen countless Marines who enlisted intending to make the service their careers forced out by being unable to reenlist. Forced out, not by lack of interest or performance, but by the numbers crunch. When reenlistment opportunities aren’t available, full retirement benefits are thrown overboard. You get VA hospital care. That’s about it.

During the filming of 11 episodes of my new show, Gunny-Time on the Outdoor Channel this year, this old Devil Dog has felt like a kid at Christmas playing with new toys. I’ve been shooting stuff, blowing up stuff and even driving neat stuff—all of which I wish I had my hands on back in the day. Such weaponry is critical, I’ll grant you that. But the greatest tactical weapon we can put into the field is the trained and experienced NCO, our military’s backbone. And right now we’re running woefully short in that area. 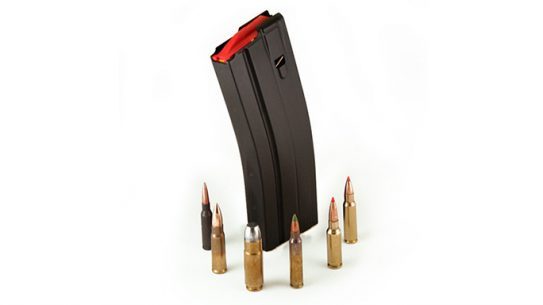 Designed for the AR-15 platform, the UNIMAG from Ross Zheng Engineering features a controlled-tilt...