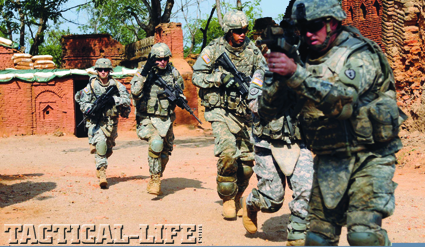 TigerSwan? The unusual name might conjure images of some exotic, Kung-Fu style, but it is synonymous with some of the finest tactical training available outside of elite military circles.

Founded by two former Army Special Operations soldiers, TSI (TigerSwan Incorporated) is a training and security consulting company located in Apex, NC. In obvious deference to the discrete nature of the founders’ previous line of work, the name appears innocuous to the casual observer, however it possesses much deeper meaning. The tiger—a hunter and predator—represents the wartime aspect of the company’s mission. The swan—refined, efficient, ever-vigilant, but also aggressive when provoked—represents the peacetime or training aspect. The company’s logo carries over to the Yin and Yang of the warrior ethos: In peacetime the warrior trains for war, but exhibits the stoic, reserved demeanor of the swan. But in wartime, the warrior is as fierce and intimidating as the tiger. With the company name thus decided upon in 2005, TigerSwan, Inc. was born.

Drawing largely from more than four decades of combined tactical and military experience, spanning from the tumultuous world events of the 1990’s through the current conflicts in Afghanistan and Iraq, TigerSwan’s CEO and COO are themselves former special operators. Subsequently, their business model was designed to address shortcomings in tactical training standards that have been brought to light since the events of 9/11. Their ultimate goal in setting up such a company was simple yet dynamic: Instruct police, military and select members of the American public using the same training methodologies designed to forge some of the military’s top special operations personnel. These techniques are not conceptual, they are reality based and combat proven, with all of the company’s top-notch instructors themselves former special operators, each having accrued many years of recent “downrange” experience. 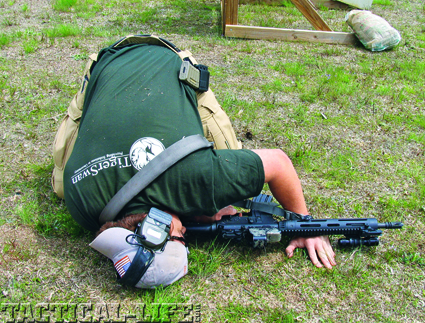 A TSI instructor demonstrates the “Brokeback” firing technique used to engage targets from behind a vehicle or under a low barricade. The support hand is used to adjust the elevation of the rifle.

Throughout the course, the TigerSwan instructors repeatedly posit that, “There are no such things as advanced shooting skills, only perfect execution of the fundamentals under stress.” How do instructors introduce this stress into the training environment? One way to do this is by incorporating a shot timer into every training scenario! This makes the events take on a naturally competitive air, and by having other students watch the scenario, the firer is placed into a stressful situation. In keeping with TSI’s training mentality, J.D. (one of TSI’s instructors), described the proper rifle training mindset by stating, “The rifle should be no different than the samurai’s long sword. You should train with it in all capacities and its use should be as natural as breathing.” This, in turn, frees up the cognitive areas of the brain to process the “fog of war” and releases the operator from burdening himself with the minutiae of weapons handling when seconds truly count.

Many of the techniques taught are innovative and reflect paradigm shifts from previously held beliefs, while the foundation still lies within basic marksmanship fundamentals. For example, TSI teaches a much more aggressive shooting stance than is the current practice, where the shooter is basically squared up to the target in an almost defensive position. In sharp contrast to the norm, the TSI instructors teach the students to stand in a slightly bladed fighting stance, with the support arm placed far forward on the fore end of the weapon. By way of explanation, the instructors describe the reason for the adaptation of this technique in the following manner: “By supporting the weapon (with the support hand) by the magazine well or by a forward vertical grip affixed close to the weapon’s center of gravity, the firer is, in essence, trying to write his name with a ‘pencil’ held only by the eraser end.” By firmly gripping the fore end of the weapon close to the barrel (as three-gun shooters do), the firer can effectively ‘drive the gun’ from one target to the next. While this does expose a portion of the firer’s armpit to the target, TigerSwan instructors maintain that, “The gunfighter should not count on the enemy’s marksmanship skills to save his life, but on his ability to put rapidly aimed shots on the target.” Aggressiveness is the key to surviving any shooting engagement, and this is one situation with which many police departments are now faced. In post-Columbine America, it is no longer acceptable to set up a perimeter and wait for S.W.A.T. to arrive. Patrol officers are now being trained to aggressively move to the sound of gunfire within a structure, and to then neutralize the threat(s) to innocent life. 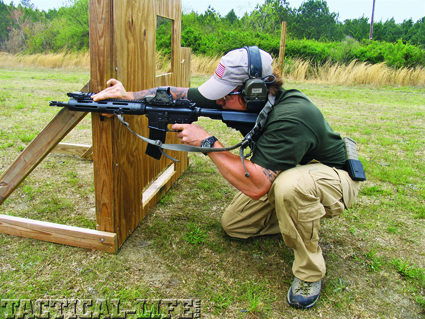 TigerSwan offers multiple rifle and pistol courses that vary in duration and content based upon the overall requirements of the end user. In addition to the regularly scheduled courses, the company also offers custom courses in many tactical disciplines, available upon request. The course I attended was two days in length, and was offered in conjunction with a three-day Tactical Pistol course. To establish credibility with the students, each instructor introduced himself to the class and gave a brief biography, touching upon length of military service, training received, combat experience and former military assignments.

Both training days began with a safety briefing, followed by an overview of previous teaching points (for the students who attended the pistol course) and a refresher on marksmanship fundamentals.

The students then moved to the 100- yard line and zeroed their weapons for the climatic conditions of the day, as well as to ensure that sights and optics remained zeroed from the previous day’s training. According to the instructors, they too conduct this re-zeroing process continuously, and this step is considered absolutely vital to achieving critical accuracy in combat situations. TSI considers the 200-meter zero to be optimal for CQB engagements in the contemporary urban environment, as it allows for close-in shots as well as the engagements of longer-range targets which may present themselves in windows, vehicles, or on rooftops. A slight adjustment in sight placement ensures that close-in shots are placed center-of-mass, while allowing point of aim/point of impact shots to be taken easily at targets at 200 meters.

Following confirmation of zero, we then moved into several basic shooting drills at the 100-yard line; each practiced first in slow-fire before being performed against the timer. The instructors demonstrated each shooting position or technique dry, then went hot to demonstrate that the technique was both valid and achievable. Following each instructor demonstration, the students then moved onto the firing line and also performed the drill dry, each having to demonstrate the proper technique before being allowed to go hot themselves. This step afforded the instructors the opportunity to walk the firing line and assess for improper technique and form, offering suggestions for improvement as well as praise when the technique was executed properly. 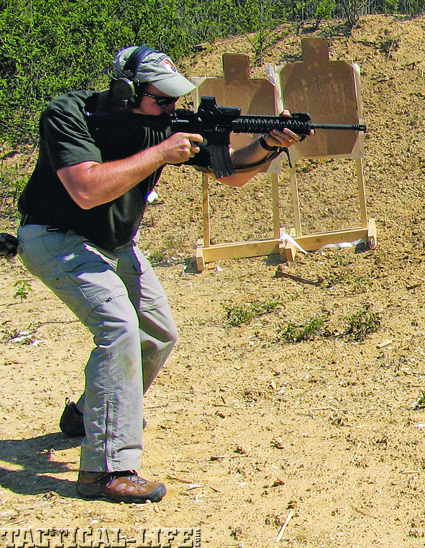 Following the basic drills, we then moved into dynamic CQB drills at the 10-yard line. These drills ranged from rhythm drills designed to get the student to make accurate follow-up shots while resetting the trigger during recoil and ensuring secondary and tertiary sight pictures are acquired, to fire-and-movement drills designed to incorporate a stable firing platform with proper target acquisition, while on the move.

On the final day of training, we were introduced to non-standard barricade positions. These positions afford the firer cover and concealment, while allowing for accurate shot placement with the rifle situated at unusual angles to the firer. Students were also required to fire their rifles from both shoulders, while ensuring minimal body exposure to the target.

The culmination of the course came with an “El Presidente” drill from the 80-yard line, requiring the firer to engage 20” x 40” steel plates with a compulsory reload in-between, and a shoot-on-the-move drill, which incorporated fire and movement techniques learned over the two days of the course. As a training note, TSI recommends that no such stress-fire drill be performed more than twice during one training period, or the training value of the event will be diminished. After several repetitions, students will try to “game” the scenario, and will feel less stressed, which will lead to unrealistic training outcomes.
Considerable emphasis was also placed upon non-standard firing positions, such as kneeling, barricade and seated. According to TSI, many urban engagements now occur well inside the 100m mark, and many shots are initially taken from the kneeling position.

Overall Impressions
The instructors were energetic, knowledgeable, tenacious, and yet very approachable. During training, almost nothing escaped their experienced eyes. They repeatedly corrected even minor errors in technique and stance, requiring the students to immediately repeat the drill in order to reinforce the correct technique before it became a bad habit. According to the instructors, the correct, exhaustive repetition of these shooting drills reinforces the correct neural pathway for a given movement, to the point that firing and movement become second nature. During the two-day course, students expended 1,000 rounds of rifle ammunition and about 40 rounds of pistol ammunition used during pistol transition drills. TSI continued their commitment to realistic training by providing each student with an emailed copy of the courses of fire, and these were delivered to each student almost immediately following the completion of the course. For more visit tigerswan.biz.