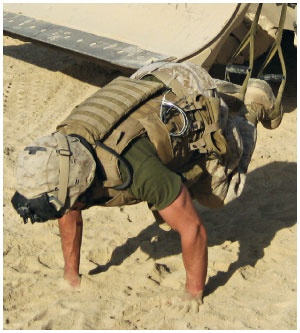 Whether you’re relaxing at home or deployed in hostile territory, the TRX System from Fitness Anywhere delivers high-end strength and conditioning workouts. This unique 1.5-pound device can go along with everyone from senior citizens to military sniper teams. 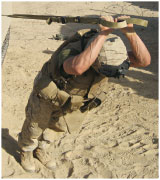 A long-guarded secret of the Navy’s elite SEAL teams is that the best of them can wield needle and thread as skillfully as knives and M16s.

No one knows this better than Randy Hetrick, of Fitness Anywhere. In the late 1990s he used a sailor’s awl, needle and heavy-duty thread to convert an old jujitsu belt and spare parachute webbing into a portable fitness device he could use anywhere. What inspired him? Hetrick, then a Navy SEAL (SEa, Air, Land special forces) squadron commander, needed a way to keep himself and his team in peak physical condition while traveling or deployed in remote areas where they not only lacked workout facilities, but often had to stay hidden for days on end.

To meet those unique needs, Hetrick created a lightweight device that can train the entire body using only the person’s body’s weight for resistance. He kept improving and modifying the system’s straps, handles and anchor for a couple of years as his men borrowed his creations, and suggested changes while developing new moves and exercises.

“Navy SEALs are pretty innovative cats, so they were always experimenting and showing me what they came up with,” Hetrick said.

Little did he know that his old jujitsu belt and parachute webbing would evolve into the TRX (Total Resistance Exercise) Suspension Trainer, a unique system now embraced by all four branches of the military, especially the Marine Corps—as well as firefighters, policemen and corrections officers. Its popularity is also soaring with amputees, senior citizens, personal trainers, Pilates instructors and NFL stars such as LaDainian Tomlinson, Drew Brees and Reggie Bush.

All Armed Forces Embrace System
When Hetrick reflects on the growth of TRX (Total Resistance Exercise), he remains amazed. He told Tactical Weapons: “This has evolved into something way beyond anything I ever envisioned. All I wanted to do in 1999 was find a way to use the body’s weight to go beyond traditional training. Climbing up and down the sides of ships requires lots of core strength. The genesis of the product was the simple fact we were doing more deployments than we ever dreamt of doing, and most of the places we went didn’t lend themselves to good core training.

About the time his early versions of the TRX became uniform and functional, Hetrick faced a tough decision. After 14 years in the Navy, including 13 as a SEAL, he was a senior lieutenant-commander and finishing his tour as squadron commander. He could soon seek a promotion to commander, or he could leave the Navy for business school. By then he and his wife had a baby on the way and his wife was tiring of his “superhero lifestyle.” So, when Stanford University shocked him by accepting his application to business school, Hetrick returned to the classroom to pursue a business degree.

Because fitness remained a central part of his life, he found himself discussing his invention with coaches and other fitness experts in Stanford’s athletic department. “I knew the SEAL people liked it, but I wasn’t sure what ‘normal’ people would think,” he said. “When I worked with Stanford’s strength and conditioning people, I saw we could cross into the mainstream markets. Plus I had access to a lot of ‘test dummies’ in my class and the classes before and after me! I worked with them as much as I could and developed more ideas for it.”

Hetrick filed patents on his invention in 2003 while continuing its development and, after graduating Stanford’s business school, he put the TRX Suspension Trainer on the market in early 2005.

His gym-in-a-bag system is a made from soft industrial-strength, non-elastic nylon webbing. It weighs about 1.5 pounds, folds into a pouch the size of a toiletry bag, and can be set up on any secure structure such as a fence, beam, wall, door-jam or pull-up bar. When soldiers, sailors, Marines or airmen us the TRX, they’ll attach it to almost any immovable object, such as a Humvee, gun turret, iron grates on windows, or the gun barrels on tanks or artillery.

Once the TRX is secured, users rely on gravity and 5% to 100% of their body weight for resistance. No extra weights are required. By adjusting their body’s position, users vary the resistance in each exercise and progressively increase the difficulty as their strength-to-weight ratio improves.

Beyond Military
Half of TRX’s current market is through the military, with some interest from firefighters and civilian law-enforcement personnel. The earliest customers were the special ops commandos; the SEALs, Rangers and Special Forces units. Now they are also doing big things with the Navy’s expeditionary warfare command, the Riverine guys and construction battalions.

“By far the Marine Corps were the fastest adapting group. They did an evaluation, made a decision, and it was go, go, go. We’ve sold them to Marine special ops and general Marine infantry, and we have some enormous deals going with the Army infantry,” said Hetrick.

The other half of the business is split among fitness clubs, team sports and lifestyle sports. “We have a lot of people using it in triathlons and martial arts,” he said. “Sports that don’t have a big tradition of heavy iron seem to be coming to us, but we also have major sports teams using it too. Ten NFL teams, a half-dozen Major League Baseball teams and maybe six to eight NHL teams are using it.”

TRX keeps bringing in outside experts to collaborate with to broaden its exercise programs and tailor new ones to specific groups. They already have 400 formal programs and at least another 100 flexibility bases. As more fitness movements look to them, their coaches develop new ideas.