0
SHARES
4
VIEWS
Share on FacebookShare on Twitter
I spend most of my time at the range watching other people shoot, as an instructor. Carefully observing the shooter and how they apply the shooting fundamentals will indicate most of the time if they hit the target or not, and the most important skill to master is proper trigger control.

As with any skill, bad habits can build up over time and many shooters will use different techniques to try and compensate. However, when distance and/or speed are added to the mix, bad form will defeat any shooter. Also, bad skills that have been built up need to be unlearned and proper technique must be developed almost from scratch.

This is one reason it is often easier to teach new shooters than it is to train experienced ones. Long-time shooters may often be making mistakes they don’t ever notice, and this is why it’s valuable to have another shooter, instructor or coach serve as an observer. Even the slightest factor can cause bad shots. I have seen shooters that—no matter the distance—consistently group their shots slightly right or left. Often this is a result of using too much or too little of the index finger, which can alternatively pull or push the gun off-center for a right-handed shooter.

Still other shooters have a tendency to anticipate the recoil, pushing the gun forward and down to try and compensate, or they jerk the trigger instead of squeezing, both of which can make their shots go low. A heavy recoiling gun will give all but the most experienced shooters fits of anticipation, and trying to shoot fast makes not jerking the trigger a real challenge. 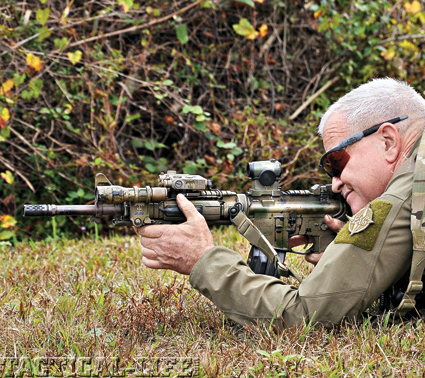 As trainer Pat Rogers (above) demonstrates, most ARs have single-stage triggers and shooters should practice regularly to master the feel of their rifle’s trigger. Panteao Productions, LLC Photos

These trigger mechanics are things the shooter can control—dealing with a bad trigger, however, is not. The first thing to understand is that triggers come in two flavors, singe-stage and two-stage for single-action guns. A double-action trigger will have a distinct pull but may still exhibit some of the problems described below.

In a two-stage trigger, the shooter will first encounter take-up, which is the distance the trigger travels with very light pressure before it starts to engage the sear and more pressure is needed. At this point, the trigger is only under light spring pressure. When there is no spring pressure at all, you have what is referred to as “slack.” U.S. military rifles, at least prior to the introduction of the M16, commonly had two-stage triggers.

Many competitive shooters, especially those who got used to older military rifles, will prefer a two-stage trigger, which allows the shooter to prep the trigger. Since it is not possible to hold the sights perfectly still, especially in pistol shooting, this lets the shooter know exactly when the shot will break and time the movement of their sights onto the bullseye of the target. Some also consider a two-stage trigger to offer a higher degree of safety since the difference in trigger feel gives the shooter more warning before the gun fires.

Too much creep or travel on a trigger can throw off almost any shooter. This is the distance the trigger moves under tension after the take-up or slack is gone, before the trigger breaks and the gun fires. A bad trigger with lots of creep can make a single-stage trigger feel almost like a two-stage trigger, making it difficult to hold steady or know exactly when the shot will break.

Another issue shooters may experience is over-travel, which is the distance that the trigger continues to move back after the gun fires. This can cause the shooter to overcompensate for the trigger squeeze and pull the gun off target. A good trigger, both single- and two-stage, should break clean, without stacking or over-travel, and the squeeze should feel smooth and even—never gritty.

The best way to tell what sort of trigger you have and to master proper trigger control is to dry-fire, always after ensuring the gun is unloaded and always in a safe direction. Watch the trigger, slowly squeeze it back and concentrate on how it feels. How far does the trigger move before the shot breaks? Does it continue to move after the shot breaks? Once the sear engages, does it feel like you have to apply more and more pressure before the shot breaks? During dry-fire practice, make sure you are applying even and smooth pressure throughout the trigger squeeze—don’t rush your shot. Focus on the front sight during the trigger squeeze until you can break the shot with virtually no movement. 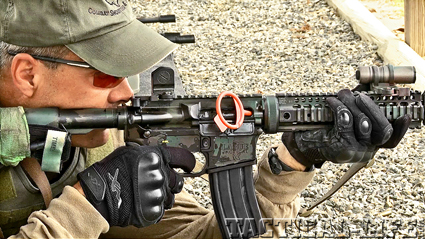 Dry-fire practice is essential to mastering trigger control, but a bad trigger can be easily replaced. There are many aftermarket drop-ins available. Panteao Productions, LLC Photos

A competent gunsmith should be able to correct any mechanical issues and there are also several aftermarket manufacturers who sell easily installed triggers that can far improve your accuracy potential. However, even a perfect trigger can’t make up for bad form.

Accuracy also involves limiting your movement in other ways, such as breathing control. It’s hard to stay still and hold your breath, so exhale and relax for each shot. Practicing your breathing will slow down your heart rate and help you focus and hold steady and avoid a panicked shot. On the range, an easy tell for someone who is not controlling their breathing is that their shots will tend to form a neat vertical pattern on their target. Proper breathing will help center the shot group.

Another factor is body position. Assuming a natural point of aim where you can stay on target without muscling the gun is key. Firing from a relaxed position means using as few of your muscles as possible, yet many pistol shooters will assume a Weaver stance, which may be good for tactics but bad for real accuracy. As the body relaxes, a right-handed shooter in the Weaver position will start to pull their shots to the right. Sometimes we have to take shots in less-than-ideal positions or conditions. Always try and look for support since that will also help minimize the movement of the gun.

Accurate shooting is all in your head and getting “in the zone” involves not just practice but concentration. Take each shot one at a time and make them count; never let a miss psyche you out. Focus on your sights and your fundamentals, not on the target. If you are doing everything correctly, you will know if you hit or not and will be able to call your shots.

A light trigger can greatly assist in precision shooting, but limiting the amount of contact between the trigger bar and the sear can also create a dangerous situation. A sudden jolt may be enough in some cases to cause the rifle to fire with too light a trigger.

The good news for shooters is that for nearly a decade Savage Arms has offered its AccuTrigger system, which achieves what many doubted was possible—a safe, easily user-adjustable, super-light trigger. First available on a few models, it is now standard on 139 out of 176 models listed on their website. 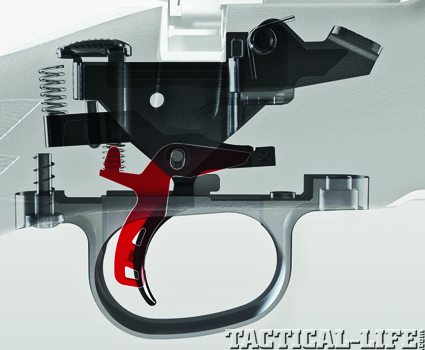 The AccuRelease lever from Savage, shown in red, allows for a user-adjustable ultra-light trigger that is completely safe

The safety on this system is achieved through the use of the AccuRelease lever, which is a blade on the face of the trigger. This lever blocks the sear from disengaging and the rifle from firing. The lever must be completely depressed before the trigger can be squeezed. In essence, the system acts like a two-stage trigger but is much safer, with a very light take-up and the second stage at the weight the shooter has preset.

The other advantage of this system is found in how easily the user can adjust the trigger squeeze to their individual preference. On most rifles, this requires the services of a skilled gunsmith and will void the manufacturer’s warranty—not so here. Simply remove the action from the stock, and with the supplied tool, shooters can adjust the trigger from 6 ounces to 6 pounds. This adjustment in no way changes the position or feel of the trigger except for the weight.

The end result is a near-perfect trigger with minimal creep that breaks clean and crisp yet maintains a high level of safety, especially when combined with Savage Arms’ teardrop three-position, easily accessible safety. Savage Arms’ reputation for making affordable and high-quality precision rifles is well deserved, as is the company’s record for innovation. (savage arms.com; 413-568-7001)