by Ross Simpson
in Military & Police
0

United States Air Force sharpshooters are familiarizing themselves with .50-caliber Barrett sniper rifles in anticipation of a decision by the brass at USAF Headquarters to add this awesome weapon to their arsenal. 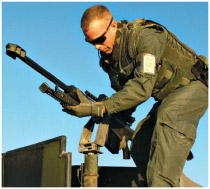 Of four DoD-accredited sharpshooter and sniper courses, two of them, the Close Precision Engagement Course (CPEC), otherwise known as Sharpshooter School, and BRAVO FOUR, which is the Army Sniper School, are located at Camp Joseph T. Robinson in North Little Rock, Arkansas. The other two Pentagon-approved sniper schools are located at Fort Benning, Georgia, and Quantico Marine Base in Virginia.