Aerial view, right side profile, of a US Marine helicopter as it flies over a Mogadishu residential area on a patrol mission to look for signs of hostilities. This mission is in direct support of Operation Restore Hope.
(Photo by TSGT PERRY HEIMER)
Comment(s)

1 of 2
Photo by TSGT PERRY HEIMER
Special Ops History: Two Notable US Failures in Iran, Somalia
Aerial view, right side profile, of a US Marine helicopter as it flies over a Mogadishu residential area on a patrol mission to look for signs of hostilities. This mission is in direct support of Operation Restore Hope. 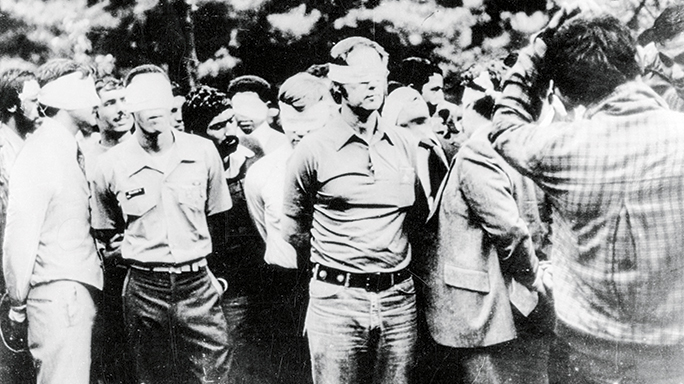 2 of 2
Special Ops History: Two Notable US Failures in Iran, Somalia
The day after their capture, a group of American hostages in blindfolds were paraded before the public in Iran 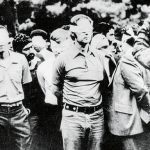 Special operations by their very nature are highly dangerous and inevitably involve a range of factors that simply cannot be controlled. Tragic results sometimes follow the very best intentions.

Two of the most famous special ops failures in U.S. history fall into this category: the attempted rescue of American hostages in Iran in 1980 and the mission to capture two of warlord Mohamed Farrah Aidid’s top lieutenants in Mogadishu, Somalia, in 1993.

In the first instance, the administration of President Jimmy Carter had spent more than five months trying to negotiate the release of the 66 American hostages who had been held in Iran since the revolution that deposed the Western-backed Shah and placed the radical Islamist Ayatollah Khomeini in power.

In desperation, and seemingly out of diplomatic options, Carter approved a highly complex two-stage rescue operation involving multiple secret ops forces, an array of weaponry, and a broad range of vehicles and aircraft.

In the end, to some degree due to an unusual set of climatological conditions, five of the eight U.S. Navy RH-53D Sea Stallion helicopters needed for the mission broke down in one way or another, causing the operation to be aborted. This alone would have been humiliating enough, but in the confusion that reigned after the decision to abort and in the poor visibility that wreaked havoc with the navigation systems in the desert, a Sea Stallion and an EC-130 transport plane collided, resulting in eight American deaths.

The failure of the mission and the continued captivity of the Americans in Iran surely contributed to Carter’s loss to Ronald Reagan in the presidential election of 1980.

Should the mission have been conducted using only fixed-wing aircraft? Some suggested so after the fact, but of course helicopters have been a critical component in a great number of special operations in the Middle East in the years since.

Would better communication and enhanced coordination between the various special forces involved perhaps have produced a better outcome? The subsequent decision to put all the special forces under a central command — U.S. Special Operations Command (SOCOM) — might suggest so, but in the end, some missions simply cannot be salvaged; soldiers put their lives on the line, and, sadly, many pay the ultimate price.

The loss of life was even greater in the mission in Mogadishu in 1993. In this case, the administration of President Bill Clinton was becoming increasingly concerned about the behavior of renegade warlord Mohamed Farrah Aidid, who controlled the northern half of a very divided Mogadishu, the capital of war-torn Somalia.

Though Aidid was a signatory to a U.N. peace plan for Somalia, he was clearly not abiding by its rules and was continuing to hamper the valiant efforts of humanitarian groups to get food and other assistance to millions who were starving across Somalia.

During the operation, two Black Hawk helicopters were shot down by RPGs (hence the title of the movie based on the operation, Black Hawk Down) and the efforts to rescue the soldiers downed in hostile urban territory resulted in 18 Americans being killed and another 79 wounded. One Pakistani and one Malaysian soldier, both associated with the U.N. forces there, were also killed, along with a significant number of Aidid’s forces (estimates range from 300 to 2,000.)

The scene, as described by U.S. Ambassador Robert Oakley on Frontline, was chaotic: “The Americans and those who came to their rescue were being shot at from all sides … a deliberate war battle, if you will, on the part of the Somalis. And women and children were being used as shields and in some cases women and children were actually firing weapons, and were coming from all sides. Sort of a rabbit warren of huts, houses, alleys, and twisting and turning streets, so those who were trying to defend themselves were shooting back in all directions.

“Helicopter gunships were being used, as well as all sorts of automatic weapons on the ground by the U.S. and the United Nations. The Somalis, by and large, were using automatic rifles and grenade launchers, and it was a very nasty fight, as intense as almost any battle you would find.”

Was the entire operation a mistake? Perhaps so. Was the use of helicopters in a crowded urban environment ill-advised? Again, maybe yes. But, as with the attempt to free the hostages in Iran in 1980, American intentions were good and the soldiers on the ground and in the air fought bravely. People were killed. This is the unfortunate nature of combat.

Known for its laser sighting systems and tactical lighting, Crimson Trace will now be...