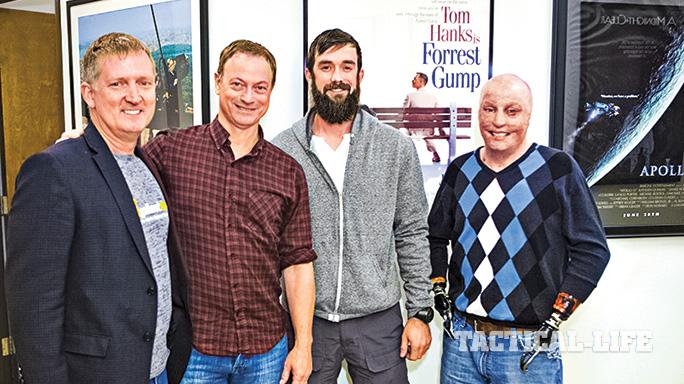 1 of 4
Vets Helping Vets: GallantFew and the Elk Institute
GallantFew helps support veterans with events including actors like Gary Sinise. 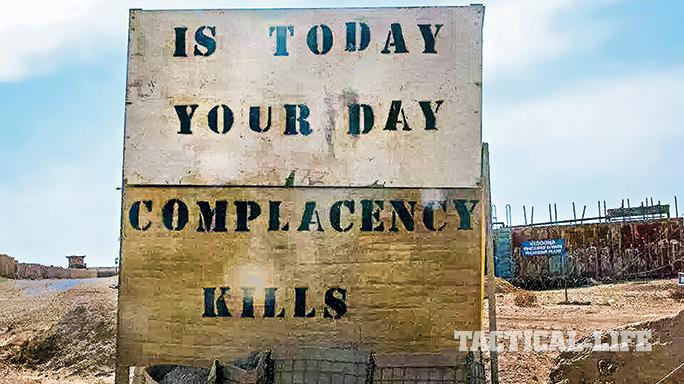 2 of 4
Vets Helping Vets: GallantFew and the Elk Institute
A sign at the exit of a Forward Operating Base in Iraq reminded soldiers of the danger they’d have to face every day. 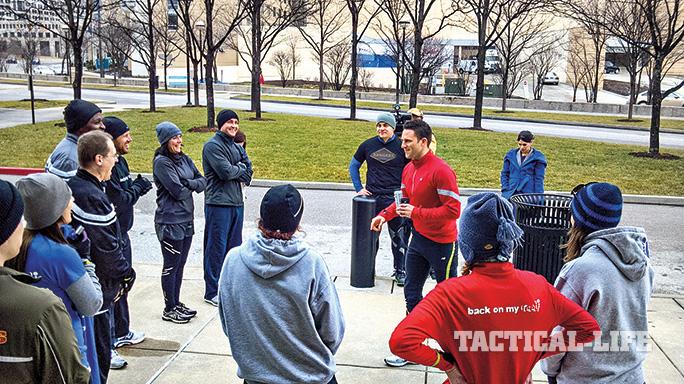 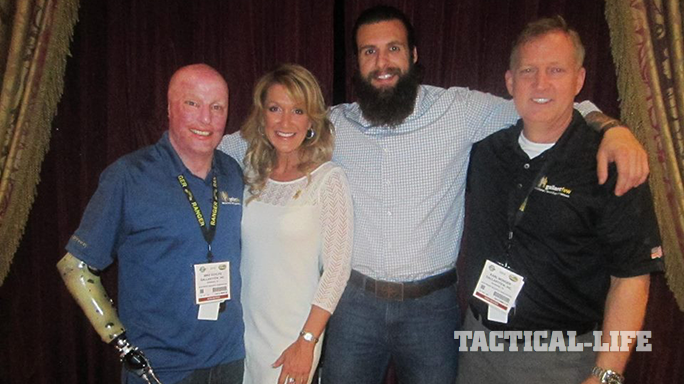 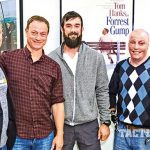 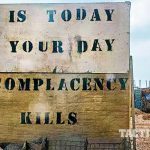 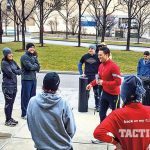 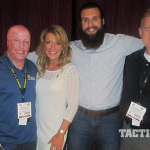 Imagine working a job that had you passing a sign on your daily commute warning of the potential for your imminent, violent death. A job where, on any given day, locals were actively trying to kill you. Improvised explosive devices (IEDs) were a normal part of the day, and you were personally struck by them multiple times. How about a job where calling for “MedFlight” transportation was a common, almost routine, occurrence? What effect would that have on your day-to-day wellbeing when repeated for nearly two years? What impact would it have on you even after the job was done?

Staff Sgt. David Lahmann served as a squad leader of a 1/133rd Infantry, 34th Infantry Division brigade combat team (BCT) for 22 months. His unit’s deployment is acknowledged as the longest-deployed BCT in a single, ongoing tour of any United States unit of the entire Iraq War.

“Every day we left our FOB [Forward Operating Base], we passed several signs reading, ‘Is today your day? Complacency kills’ in bold, black stenciled letters. It was an effective message, but given the amount of IEDs, being reminded of imminent death took its toll. We rolled outside the wire weekly and would be gone for at least three continuous days at a time. IEDs were a constant threat. My squad wrecked over a dozen vehicles in IED attacks. I was personally in a vehicle destroyed in two of those attacks by IEDs. Our unit ended up calling for a MEDEVAC on nearly every mission. The lowest-ranking soldier in my squad called in a ‘Nine Line’ at least a half dozen times. A number of us had called them in so often that we had the full report procedure memorized.”

Despite a lack of obvious, visible scars, mental trauma is a real injury. Staff Sgt. Lahmann has MRI scans showing the bulged discs from multiple back injuries, audio screenings documenting hearing loss, and has received multiple cortisone injections for shoulder injuries—all sustained during combat operations. However, there is no “scan” showing what impact working in a violent, dangerous environment 24 hours a day for nearly two years straight has on a person’s wellbeing. Often, the symptoms won’t manifest until much later. While there is no cure, a supportive environment among fellow veterans—people who truly know how they feel—is extremely helpful. On top of all this is the transition from military life to a civilian career. Even without physical or mental trauma, it can be extremely dificult to transition from military to civilian life.

GallantFew is a non-profit organization founded in July 2010 that helps veterans transition from active military service to a civilian life. Founded by Karl Monger, a former Ranger who served with the 1/75 Ranger Battalion, the organization provides several support networks for veterans.

Its nationwide network of Ranger veterans now numbers over 4,000 globally.  For example, the Darby Project, named after William Darby, the first commander of the 1st Ranger Battalion in 1942, directly targets U.S. Army Ranger veterans. GallantFew is looking for veterans outside of the Rangers (Army, Navy, Air Force) so that the organization can better serve those transitioning veterans with its concept.

The Descendants of Sparta focuses on anti-suicide outreach and law enforcement training, educating local police in de-escalation tactics to reduce the potential of violent interactions. GallantFew also has its Raider Project, which works with Marine combat troops and has plans to expand those directed efforts in the future.

The GallantFew annual fundraising and awareness campaign, Run Ranger Run, has had great success. The organization receives no grants or government funding, but carries out all of its work through private donations.

The concept is a nationwide veteran mentor network that helps our returning heroes transition to civilian life with the help of fellow veterans. The core focus is one-on-one mentoring among veterans, with an ideal match being veterans living reasonably close, having served in the same branch and ideally with the same military occupational specialty (MOS), with similar assignments and deployments. With mentors and protégés sharing common experiences, a stronger bond is developed than from seeing a mandated therapist with no military experience.

GallantFew further seeks to reduce veteran unemployment and homelessness. Beyond locating an understanding peer to share time with, the organization seeks out veterans who have become successful in their post-military civilian careers, people who can mentor a returning military vet by helping them with their résumés and job interviews, providing network contacts, coaching them on service-disabled and veteran-owned small-business opportunities or learning the requirements of working within federal procurement.

New veterans who are about to leave the military can sign up with GallantFew by providing their service details. Seasoned veterans who have been out for a while and have successfully transitioned to civilian careers are placed with new veterans. Civilian profession specifics are less important than having a fellow service member who has navigated and successfully made the transition. Mentors work with their protégé at least a few times each month with a focus on résumé preparation, job interviewing and networking. This also provides the returning service member a chance to talk with someone about civilian work life.

Sometimes the problem is bigger than needing a guiding hand. Chronic traumatic encephalopathy (CTE) and traumatic brain injuries (TBIs) have come to light recently. Medical science has known about them for years, and despite being a condition affecting thousands of veterans, they only became publicly recognized due to high-profile sports celebrities.

Post-traumatic syndrome (PTS) and post-traumatic stress disorder (PTSD) are forms of psychological trauma that have historically been labeled as “shellshock” or “battle fatigue.” There are differences in degrees and contexts, but basically, a traumatic experience continues to have a negative effect on a person’s psychological health, performance and overall wellbeing.  Dr. Carrie Elk has been in the mental health field for over two decades, having earned multiple degrees in education, psychology, counseling and human science as well as certification as a trauma expert. She is a psychotherapist focused on military mental health and specializes in treating PTSD. She has researched methods that strive to eliminate triggers, not just decrease symptoms. Following the death of her father to cancer and her own diagnosis and successful treatment of the same, Dr. Elk joined with Military One Source to provide mental health treatments.

Dr. Elk served as a clinical services supervisor for Military One Source and later moved on as an investigator during initial studies of treatments for PTSD and TBI done at the University of South Florida College of Nursing. The USF’s grant from the Department of Defense to study PTSD required someone with military mental health experience, and Dr. Elk used her experience with Military One Source to lead the studies. Dr. Elk’s work has led to a number of patients no longer requiring prescription medication to manage their PTSD symptoms and instead has corrected traumatically stored memories so that they do not cause symptoms (triggers) for the veteran any longer.

Dr. Elk created courses on PTSD and other psychological trauma for a number of military and veteran organizations and served as a subject matter expert in the field for USSOCOM Joint Special Operations University and Care Coalition.

Dr. Elk took all the experience from her work with veterans/service members and founded her own non profit 501(c)(3) organization, the Elk Institute for Psychological Health and Performance, to provide training, treatment and research consultation on psychological trauma and other mental health topics for service members, veterans and organizations at no charge to the individual. The Elk Institute is an independent, civilian-run nonprofit that relies on donations to provide these confidential services. Dr. Elk tailored her approach based on what she had learned from veterans and service members: incorporating what they need and feel comfortable with and eliminating the barriers that keep them from getting help. Her approach does not require the client to disclose the traumatic material, is short term, and the result is the elimination of triggers. The memory goes from being stored as a traumatic memory to instead being one that no longer reactivates the physiological response upon recall. An advisory board comprised of veterans, active-duty service members and mental health professionals guides the Elk Institute. Working in collaboration with other organizations like GallantFew, Dr. Elk and her colleagues have been able to reach many veterans in need worldwide.

GallantFew finds former service members turned civilian professionals to mentor new veterans as they begin a transition to a new career and way of life. Rather than rely on the empty “I know how you feel” assurances from well-meaning counselors, GallantFew helps cement a real bond of understanding by finding people that really have “been there, done that” in both the military and civilian sectors. Many times, simply having a mentor can help, and the Elk Institute’s professionals also offer strong, research-based treatment options.

As Americans, we enjoy freedoms secured by others willing to do dangerous work on our behalf. We need to support our warriors, and organizations like GallantFew and the Elk Institute help veterans achieve the quality of life they deserve. 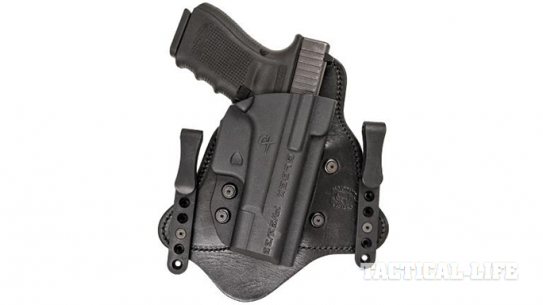 Comp-Tac Victory Gear has made six of its most popular holster fits, including IWB...