As the old angler once said, “There is no substitute for time on the water.” Ideas and concepts ebb and flow in and out of favor, personalities rise and fall. While marketing campaigns hype catchy information in the public arena, veterans who have served, observed and survived have knowledge to share that cannot be re­­­­placed by in-vogue theories. Pat Rogers, founder of EAG Tactical, is one of those veterans. A former USMC warrant officer and retired NYPD sergeant, Rogers draws on experiences from combat and the mean streets to bring a combination of solid fundamentals and practical know-how to his students of gunfighting. 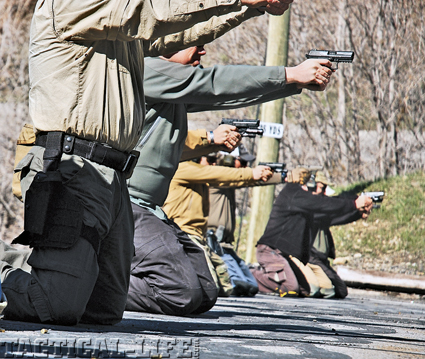 Students practice the full-kneeling technique, which is preferred for the additional precision that two equally planted knees provide.

TW was invited to attend Pat’s Pistol Level 2 course at the Salt Lake Unified Police Range with a variety of LEO, military, and civilian students. Most were from the local area, but several had flown into Salt Lake. This was a course for advanced shooters, and students came equipped and ready to learn. After the requisite safety briefing, Pat rolled directly into a classroom block of instruction on the “whys” of gunfighting. Rogers drove home the distinction between the disciplines of shooting and fighting: “There is a difference between shooting and fighting. In shooting, there is no penalty for missing. In fighting, it’s death.”

Like every good instructor, his experiences have shaped his perspective and curriculum. “Why would a cop fire only one shot? If a cop (or anyone else) is forced to fire, the goal is to shoot them until they stop what they are doing. But you are responsible for every shot.” This balance of accountability and practicality became a theme for the course. 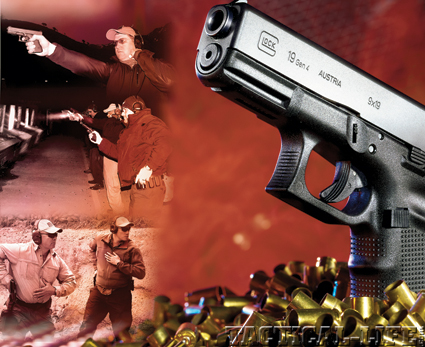 With 15 rounds of 9mm ammo on board, the Glock 19 Gen4 is very popular in law enforcement. Glock recently updated its recoil assembly to prevent malfunctions. FAR LEFT: During the night-fire evolution, students work through the fundamentals with the added complexity of utilizing a light source to stay on target.