When Is A Rifle Not A Weapon?

0
SHARES
2
VIEWS
Share on FacebookShare on Twitter
Camp Atterbury, IN: The more-than 4-foot-long, 30-pound rifle rested against the shoulder of the GI as he scanned for his target through his newly calibrated scope. He lay in the prone position, undistracted by the hot sun or the flame-retardant gloves he wore for protection. He slowly and steadily pulled the trigger.

The rifle leapt into the air, the mat the soldier lay on blew back toward him with a gust of wind and dust that exploded from the muzzle brake of the weapon. Seconds later, a soft thud and then a plume of smoke 500 meters away—he knew he had his target. 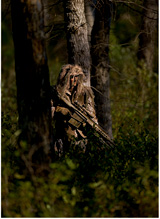 Saving Lives With Accuracy
“The M107 is classified, for our purposes, as a render safe tool,” said Capt. Roger Lewis, 641st Ordnance Company, a Guardsman from Daleville, AL. “It is not considered a weapon for our team, because we use it strictly as a tool to dispose of unexploded ordnance.”

Sgt. 1st Class Wayne Butt, NCOIC (non-commissioned officer in charge) for the post Small Arms Readiness Group, explained the purpose of the training. “It is for the EOD team to get a good shot group, an accurate zero for their M107 .50 Caliber Barrett rifles, to collect down-range data for their M107’s and scopes, and weapons fire experience,” he said.

This tool is generally used by the team to detonate or destroy sub-munitions and unexploded improvised explosive devices, which are extremely dangerous to the team, soldiers and civilians.

That is why finding the maximum effective range of the tool is so important, Lewis said. This is just one of the tools an EOD team uses on a battlefield to combat IED’s. “It is easier to stand off and engage UXO’s [unexploded ordnance] with this tool. Rather than go in and dispose of each individual sub-munition, we can stand back at a known distance and engage them out there in the field.”

The training and information collected on range 21A is vital to the working operations of the team. The M107 is just another tool that the Army employs to protect soldiers on the asymmetrical battle field.