It’s always tempting to compare the action shooting sports to various forms of car racing. However, those analogies usually don’t hold up. Except for one, and that’s Steel Challenge. This fastest of the handgun shooting sports has plenty of similarities to drag racing, as you’ll see. 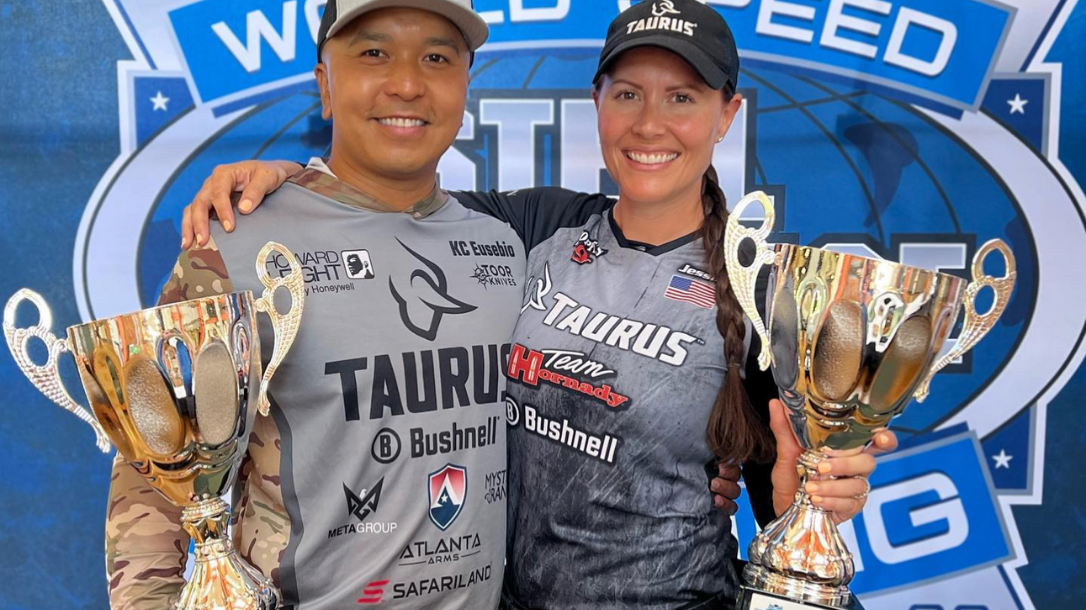 The Guns of Steel Challenge

Because it’s a division of the United States Practical Shooting Association, Steel Challenge (SC) uses the same equipment divisions, with a couple of additions. It mirrors the Open, Limited, Production, Single Stack, and Carry Optics divisions. However, SC has two revolver divisions. One is Iron Sight Revolver, and the other is Optic Revolver. Obviously, Optic Revolver is for revolvers that have optics, they’re also allowed to have compensators. Think of it as Open division but for revolvers. Like USPSA, SC allows centerfire wheelguns to hold up to 8 rounds.

Another slight difference is that Steel Challenge has two divisions for Pistol Caliber Carbine. PCCO = Optics, and PCCI = Irons. The iron sight PCC division isn’t particularly popular, but it does exist. However, what really sets SC apart while simultaneously making it very welcoming with a low cost of entry are its rimfire divisions. The fastest shooting sport in the world has four divisions for rimfire guns. Those are Rimfire Pistol Optics/Irons, and Rimfire Rifle Optics/Irons. The optics divisions for rimfire rifle and pistol are incredibly popular at both local matches as well at state, area, and the World Speed Shooting Championship. They also help make the sport very easy to get into, since all you need is a Ruger 10/22 or a Ruger MkIV and some magazines.

Unlike USPSA or IDPA which have a theoretically unlimited number of stages, Steel Challenge only has 8 sanctioned stages. Each stage consists of 5 steel targets in various arrangements depending on the stage. There are four main targets, and the fifth steel plate is called the stop plate. Each stage is broken down into 5 individual strings of fire, with one exception. One stage, Outer Limits, is only four strings of fire. This is because Outer Limits has the longest shots of any SC stage. Plus, it’s the only SC stage that features movement on the clock. Your score on the stage is the sum of your best four (or three) string times. For example, on the blazing fast stage Smoke and Hope, they’ll take your worst string time and toss it out. Then add the four remaining times together to get your stage score. The winner of the match is whomever has the fastest total match time.

Because of the simple scoring system, Steel Challenge shooting events are very easy to follow. They’re also quite spectator friendly. Additionally, the support equipment is simple. The rimfire pistol divisions don’t even require a holster. You will need a holster that covers the trigger guard if you want to shoot a centerfire pistol at a Steel Challenge match. Also, for the centerfire divisions, the bullet has to have a minimum diameter of .355, making 9mm or 38 Special the smallest calibers you can shoot at the match.

As a shooter, for a club match you’ll need around 200-250 rounds of ammo. If you’re going to shoot a centerfire gun like Production, Open, Carry Optics, etc you’ll need a belt and holster. It helps to have at least 5 magazines, but you can make do with 3 if they hold at least 15 or more rounds. Just make sure to change magazines between strings so you don’t run out of rounds. A reload will really kill your time. Rifle shooters, rimfire and PCC, will need a rifle bag and a chamber flag, as well as sufficient magazines.

The official Steel Challenge rules are available online, as well as an explanation of how the classification system works. If you’re new, don’t worry too much about your classification, and just focus on getting hits. But most importantly, have fun. Steel Challenge is a great sport that will provide you with a lifetime of fun, and is accessible to shooters of every age and physical cability.