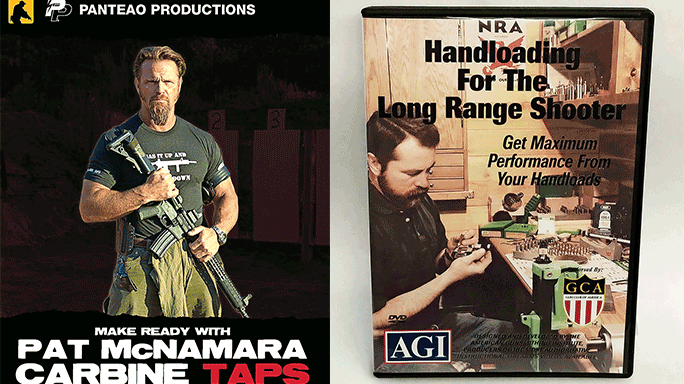 New ‘Carbine TAPS’ DVD helps you train like you fight!

Pat McNamara has joined the Panteao ranks with a video version of his popular Tactical Application of Practical Shooting (TAPS) course. Beyond the black and white of a book, the one-hour-and-24-minute video delivers the pure “Pat Mac” personality and unique emphasis on both training methodologies and the “why” behind his approach to training.

In his own words, Pat McNamara summarizes the TAPS course as “a train-the-trainer leadership program that revolves around a shooting program that adheres to the fundamentals and incorporates individual complex battle drills that are ambiguous in nature to encourage quick thinking and problem solving…the drills are combat relevant and encourage continuous thought process and demand accountability.”

McNamara follows a performance- based methodology in his training that is “based upon doing what we can with what we have.” This eliminates the distraction of arbitrary standards of a number of shots from a certain distance in a certain time to pass or fail at a particular drill. Performance, in McNamara’s view, is more like a professional athlete’s training. “This approach allows a student to perform within his own capabilities,” McNamara adds. Ultimately, McNamara’s approach is to deliver training and drills that all shooters can perform at their respective levels, and improve based upon their skills, experience and needs of their place in life.

The Make Ready With Pat McNamara: Carbine TAPS DVD opens with the basics of safety and rifle marksmanship. McNamara shaves away a great deal of doctrinal and institutional scar tissue to demonstrate the core fundamentals of establishing a basic firing position and trigger control. In the same lean manner, he moves through multiple firing positions, use of cover and mechanics drills that reinforce and provide simple feedback to students of the course.

McNamara is an advocate of movement as a key to survivability and views it, along with physical fitness and mobility, as a basic skillset every shooter should possess. In addition to TAPS, McNamara created Combat Strength Training (CST), a program that applies performance-based principles to physical conditioning, or what he refers to as the “combat chassis.” But TAPS isn’t a workout video or highlight film of McNamara’s speed or virtuosity with the carbine; rather it is a demonstration of the fundamentals to which speed and accuracy can be increased through focus and repetition.

With performance and movement in mind, McNamara progresses into drills that drive home fundamentals such as magazine changes, transitions between a carbine and pistol, and movement around and utilization of cover. He also breaks down the transition of the carbine between shoulders in the “bilateral drill.” Proprioception and kinesthetic sense (where your body is and how its oriented in space), and visual acuity are covered in the “Grid of Fire,” “Grinder,” “Burn and Turn” and “Blaze X” drills, which incorporate movement with the carbine, shooting and decision making.

McNamara finishes the video with segments on clearing carbine malfunctions, “training like you fight” (it’s not what you think) and a summary that ties the lessons together and training advice for the developing shooter in progressing his skills.

The Carbine TAPS DVD can be purchased or viewed in a streamed version via subscription at panteao.com.

Master AGI gunsmith Darrell Holland will show you how to maximize your accuracy.

I loaded my first cartridge in 1973. Like a lot of newbies at the time, I had to learn this handloading stuff on my own. During the following 42 years, I picked up a lot of tips and tools that have made my handloading experience better in terms of the quality of ammo I produce and my enjoyment of this hobby-turned-livelihood.

Handloading For The Long Range Shooter is a DVD from the American Gunsmithing Institute (AGI). It features Darrell Holland, a master gunsmith and competitive shooter, going through a number of techniques to produce very accurate ammunition. As he says in the introduction, an athlete needs the best nourishment in order to perform at his or her best; a firearm that’s expected to deliver superb accuracy needs to be fed superior ammo.

The number one key to shooting well is consistency. Everything you do in the act of shooting must be exactly the same from shot to shot. That is as true for your ammo as it is for your shooting technique. Holland reveals many of the things you may have never thought of to ensure each round of your ammo is as identical as possible.

Most of what we do as handloaders is focused on case preparation. Unless you cast or swage your own bullets, everything else in the handloading process is about assembling components provided by someone else. So the case ends up getting the lion’s share of our attention. Holland enumerates the characteristics we look for in an accurate case—weight, concentricity and dimensions—in a clear and concise manner.

Of particular value to the handloader wanting to load super-accurate ammunition are Holland’s clear instructions and background on some of the more esoteric tools of the trade. Things like a concentricity gauge may be Greek to folks without a background in machine work, yet it is one of the most useful tools a handloader can own. Straight-line bullet seating dies are not new, but they are not too common on many a handloader’s bench. They should be, though, if you want truly accurate ammunition. Holland’s descriptions and demonstrations shorten the learning curve of these tools greatly.

Watching this video has given me a bit more focus and determination to become a more thorough and comprehensive handloader. For example, within the last couple of years I have started conditioning all of my rifle primer pockets with a uniforming tool from Sinclair. It is a bit time consuming, but knowing that each case has perfect primer pocket dimensions and is identical with all the others has made my loading process better and more consistent. Once I feel the primer bottoming—I began using hand-priming tools exclusively about 10 years ago—there is no need to double check the primer for seating depth.

Another area that Holland delves into with an excellent explanation is the neck versus full-length resizing issue. For quite some time accuracy buffs have insisted that cases used for precision shooting should only be neck sized. Redding has been a leader in this area and makes a Type-S neck-sizing die that utilizes replaceable bushings to precisely size the neck of a case to match the chamber of a particular rifle. Something I learned from Holland is that it is best to do this resizing in two or three steps, depending on how much resizing is needed. Making two or three gentle passes and resizing the neck a couple of thousandths at a time helps preserve the concentricity of the neck in relation to the case body.

However, for hunting ammunition, gilt-edge accuracy isn’t required, but absolute reliability is critical. This is where full-length resizing is needed, and Holland points that out. This is equally true when it comes to bullet-seating depth. Holland gives a fine explanation of why bullet-seating depth is critical to accuracy but can be too much of a good thing in hunting ammunition where a bullet seated so that it engages the rifling can be pulled from the case while extracting an unfired round, leaving the bulled jammed in the barrel and unburned powder dumped into the action. I have made that mistake and typically load my hunting ammo to have the bullet clear the rifling by at least 0.005 inches. You can still employ the other techniques for accuracy when assembling hunting ammunition and benefit from them in your rifle.

Handloading For The Long Range Shooter is not a primer for brand-new handloaders. You should have the basics mastered. But for the handloader who wants to make his or her ammo the very best possible and hasn’t been exposed to these techniques, this video will save them a lot of time. They have crammed 40 years of hard-earned experience into a one hour. 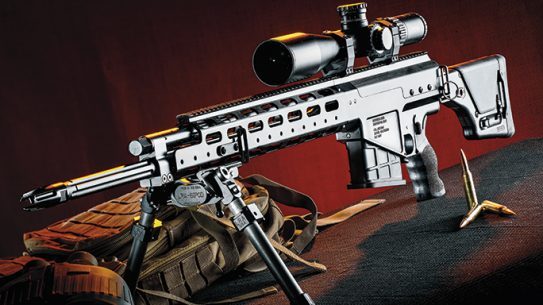 Alexander Arms’ Ulfberht strikes like lightning out to 1,625 yards!