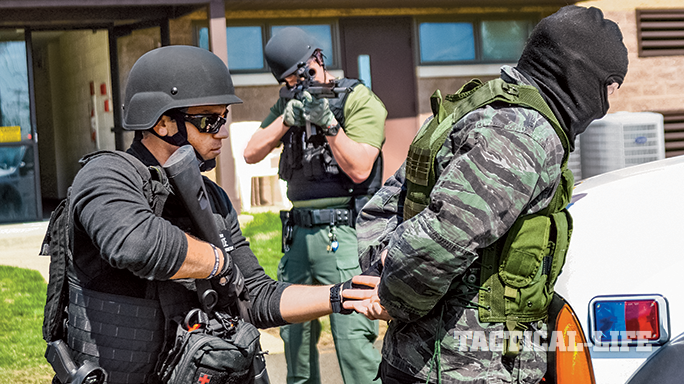 1 of 4
First Responders: 5 Types of Multiple Targeted Attacks
Here an officer provides cover, prepared to use lethal force, as his partner apprehends the suspect. Proper training, suitable weapons and essential gear are all critical in counterterrorist operations. 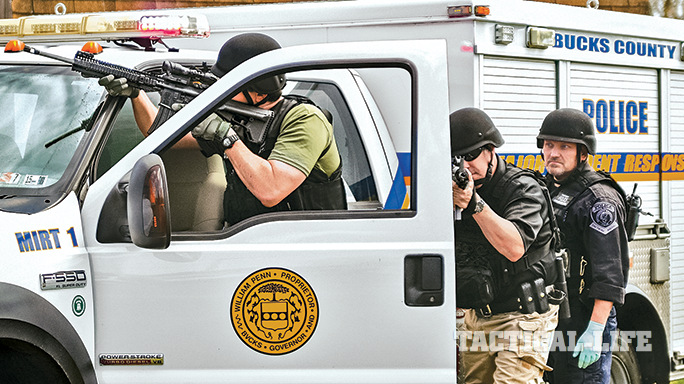 2 of 4
First Responders: 5 Types of Multiple Targeted Attacks
The terrorist tactic of “multiple targeted attacks” attempts to overwhelm first responders. Police officers, firemen and EMS must prepare for the worst in training for any possible scenario. 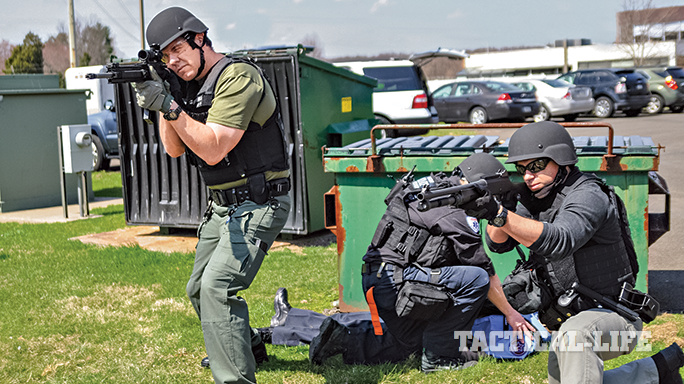 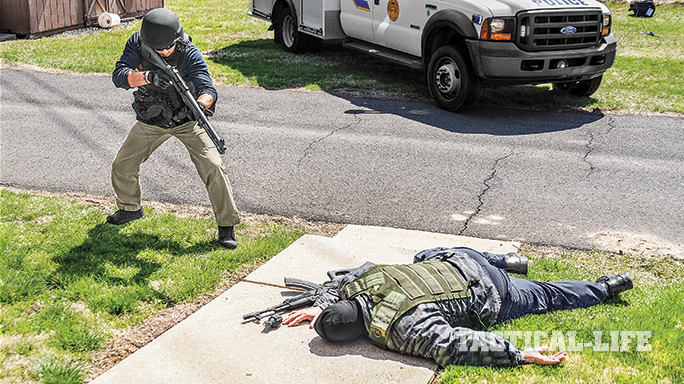 4 of 4
First Responders: 5 Types of Multiple Targeted Attacks
Use extreme caution when approaching a downed terrorist. They might trigger an improvised explosive. 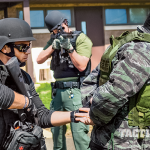 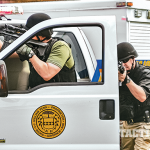 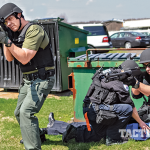 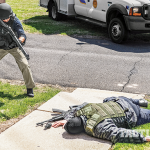 You are halfway through your busy nightwork tour of duty, patrolling in a major city, when the police radio starts to blare out priority jobs: “All cars stand by. Reports of multiple gunmen firing into the Center City train station’s passenger platforms. Numerous calls. No descriptions on the gunmen at this time.”

While you’re en route to the train station, more calls come out over the air: “reports of an exploded taxi cab” at a congested shopping mall in the north end of town; then “gunmen firing and throwing grenades into a nightclub” on the opposite end of the city.

Events like these overwhelmed first responders in Mumbai, India, back in November of 2008. Mumbai, India’s largest city and the country’s financial hub, was attacked by members of the LET (lashkar-e-tayyba, or Urdu for “army of the righteous”), a group of jihadi terrorists from Pakistan. Ten heavily armed LET assailants, separated into several different teams, simultaneously attacked various locations throughout Mumbai with explosives, assault rifles and grenades while communicating with their handlers in Pakistan via cell phone. The LET leaders watched the terror operations unfold live on international cable news over the course of three days of attacks and directed the assailants to carry out actions at different locations. In the end, the LET had attacked a night club and several elegant hotels frequented by Westerners, a train station, a Jewish community center and a hospital: 164 innocent lives were taken, and over 300 were wounded. This was India’s version of our 9/11.

First responders across the country, especially the police, have started to prepare and train for the possibility of “multiple targeted attacks” (MTAs), also referred to as “multi-assault counterterrorism action capabilities” (MACTAC) events. And given the nature of our times, it’s with good reason. Police work and the topic of terrorism were never quite separate for me when I started my career in law enforcement. I was just a young recruit in the academy when two of the most infamous terrorist operations of the 1990s occurred. One happened overseas and the other in the most unthinkable of locations, America’s heartland.

It was March 1995 when the Aum Shrinrko doomsday cult released sarin nerve gas in the Tokyo subway, killing 12 and injuring thousands. The following month, on April 19, Timothy McVeigh drove a large truck containing 5,000 pounds of ammonium nitrate fuel oil explosives to the Alfred P. Murrah Federal Building in Oklahoma City, lighting the fuse as he fled. This callous act resulted in the death of 168 people, 19 of which were children under the age of six.

Police agencies must consider what type of attacks could occur in their jurisdictions and what locations are vulnerable (or considered desirable by terrorists) to attack. They must now recognize not only the potential for multiple assaults in one area but also a coordinated campaign of killing spread out over a town or city.

There are various categories of events that terrorists can exploit. The following are five different modes of attack that have historically taken place throughout the globe. The goal of decimation attacks is to kill or wound as many people as possible, using active shooters or bombers. Terrorists typically select a target-rich environment (a location filled with many people), usually at a soft-target site (one not fortified or defended). The LET terrorists had this objective in mind when they sprayed machine-gun fire into hundreds of commuters at the Mumbai train station. Officers should be well aware of the target-rich locations where they patrol, or of the special events that bring large groups of people together at a soft-target location.

Next is the parallel device attack, which is carried out by several explosive devices detonating simultaneously or near simultaneously in the same location. The idea is to have multiple bombs detonating concurrently to maximize the death toll, while having backup devices ready for any defective bombs or for creating even more confusion and chaos. The 2004 Madrid train bombings by an al-Qaida-inspired terror cell, where four separate trains were attacked by explosives, is one example. This attack killed 191 and injured 1,800.

Another threat to consider, especially for police, firefighters and EMS responders, is the prospect of a secondary device attack. This could be a second IED, timed to go off when first responders arrive at a site of an initial bombing. These may be placed where the terrorists believe a staging area, triage area or command post would be set up. American terrorist Eric Rudolph and his Army of God used secondary devices on several occasions. One secondary device used by Rudolph was in 1997 at an abortion clinic in Georgia. Approximately one hour after his first IED exploded, a second one detonated. Miraculously, no one was seriously injured. There is no doubt who the intended targets for the secondary device were: the first responders.

A mass hostage siege involves the taking of a large amount of hostages, ideally at a soft-target location, with the goal of eventually murdering the victims, getting the terrorists’ demands fulfilled or buying time for another purpose. The Chechen terrorists are notorious for these large-scale hostage sieges. They have taken over a Moscow theater and several hospitals, each with hundreds of people held, but by far the most heinous was the Beslan school takeover in southern Russia in September of 2004. For several days, close to 1,200 hostages were held by approximately 50 terrorists with rifles. Explosives were used to booby-trap the premises. This horrible siege ended after a brave entry and firefight by the Russian special forces, resulting in the loss of over 300 hostages, most of whom were grade-school children.

Lastly, there are multiple dispersed attacks, which involve simultaneous attacks at different locations. These multiple incidents are part of the same overall operation, using some or all of the aforementioned methods. These collective attacks will have a greater effect and impact than the sum of just one individual incident or operation by a terror group. The LET’s attacks throughout Mumbai were of this nature. We also can add to this category that dark day in September 2001, when al-Qaida hijacked four large commercial aircraft, fuel filled to capacity, to carry out their lethal attack on our unsuspecting nation.

As an instructor for a large metropolitan police department, I had the chance to work on our state’s lesson committee, which addressed the subject of MTA response tactics. There were several recommendations for patrol officers to suitably respond, and certain equipment was highlighted: the need for long guns (M16 or carbine variants, using NATO/military rounds), the suggested use of go-bags that officers could quickly sling on that contained such necessities as extra magazines for long guns and handguns, a first-aid kit, flex cuffs, binoculars, water and so forth. Also suggested were breaching tools and protective equipment like helmets, NIJ Level III vests, ballistic shields and protective eye wear.

Unfortunately, terrorist use of MTAs is predicted to be the wave of the future, and police need to be aware of the threat and prepare accordingly. 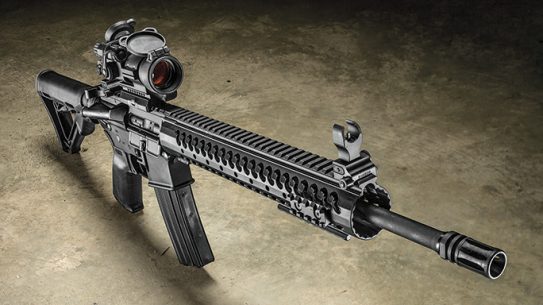 Ready right out of the box, this AR is taking carbines to the next...