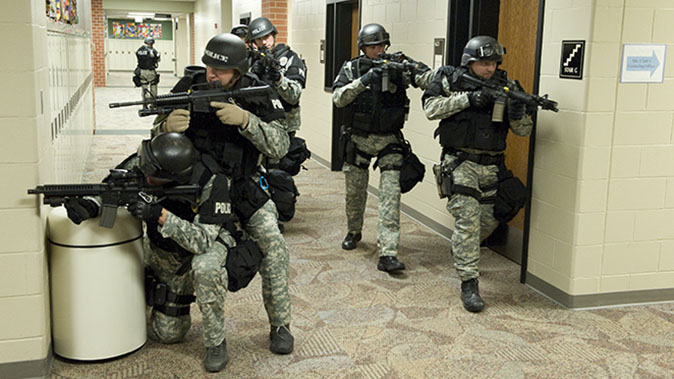 1 of 8
Photo by Sean Utley
14 Key Points to Consider in Active Shooter Situations
“Speed, surprise and violence of action are the key tenants to any attack or counterattack. If you can master all three, you have a better chance of succeeding.” 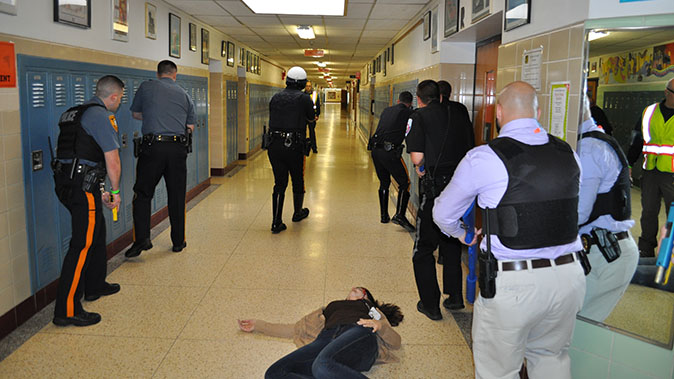 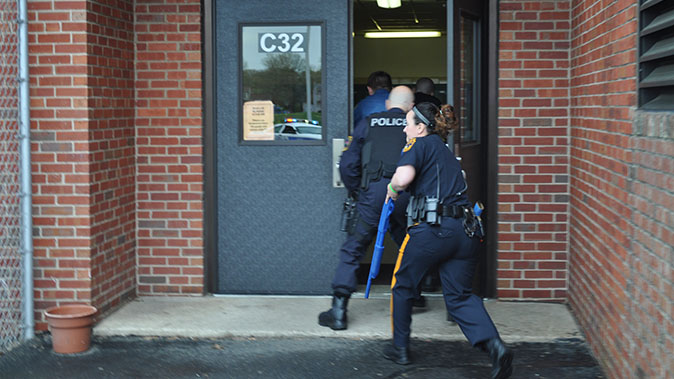 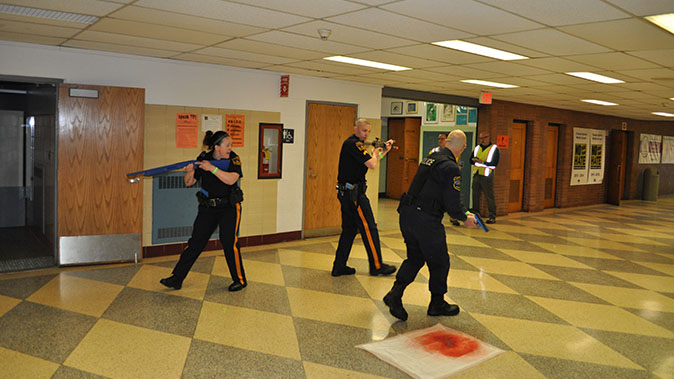 5 of 8
Photo by Donald J. Mihalek
14 Key Points to Consider in Active Shooter Situations
The active shooter drill hosted by the LMPD showed the importance of communicating.The first officer on the scene must become the “comm link” for following officers. 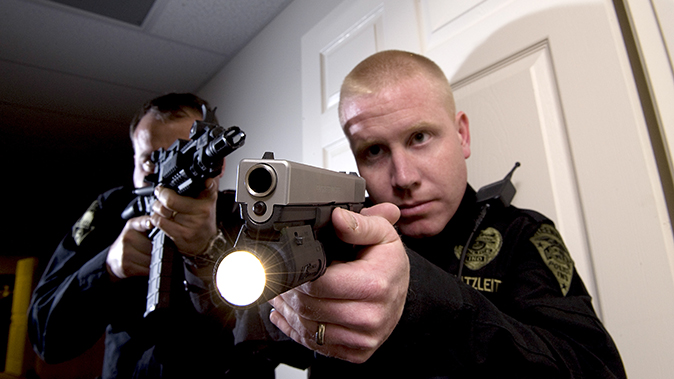 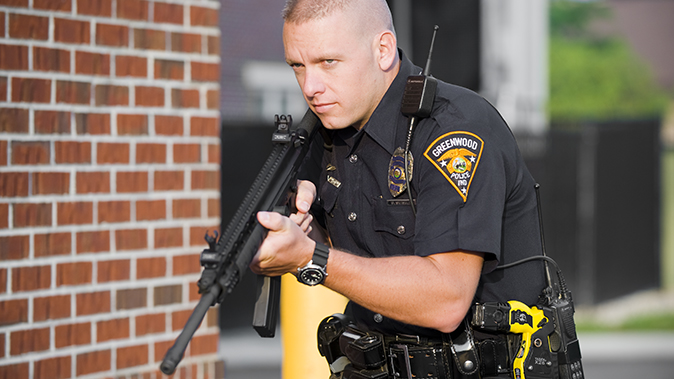 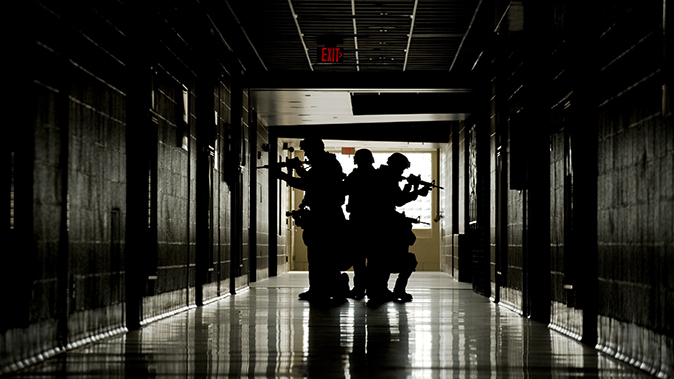 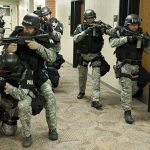 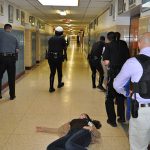 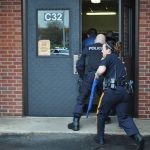 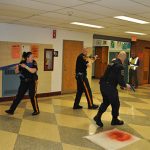 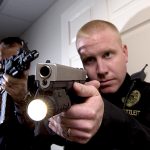 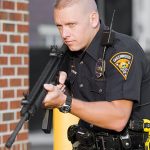 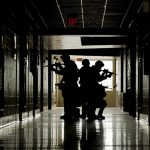 Active shooter incidents, particularly in schools, have shown some startling similarities. Several studies have been conducted to try to determine what makes an active shooter tick and compels them to act. The Secret Service’s “Safe School Initiative” came away with 10 key findings of what it calls acts of “targeted violence,” most of which are transferable to any active shooter scenario. 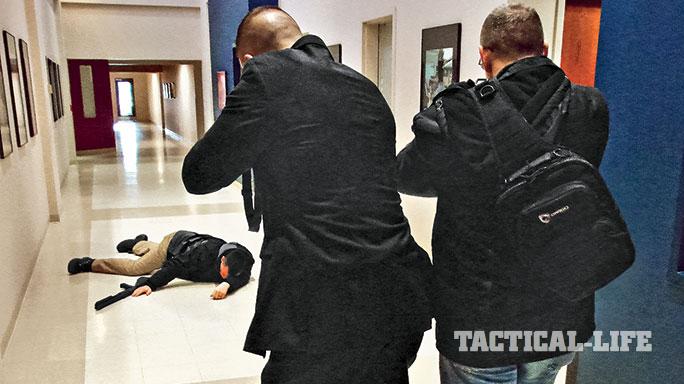 2. Prior to most incidents, other people knew about the attacker’s idea and/or plan to attack.

3. Most attackers did not threaten their targets directly prior to the attack.

4. There is no accurate or useful “profile” of students who engaged in targeted school violence.

5. Most attackers engaged in some behavior prior to the incident that caused others concern or indicated a need for help.

6. Most attackers had difficulty coping with significant losses or personal failures. Moreover, many had considered or attempted suicide.

7. Many attackers felt bullied, persecuted or injured by others prior.

8. Most attackers had access to, and had used, weapons prior to the attack.

9. In many cases, other students were involved in some capacity.

Whether it was Columbine, Virginia Tech, Newtown or San Bernardino, you can probably find most of these points intertwined in the event.

Speed, surprise and violence of action are the key tenants to any attack or counterattack. If you can master all three, you have a better chance of succeeding.

At the 2011 International Law Enforcement Educators and Trainers Association (ILEETA) conference, Chief Jeff Chudwin of the Olympia Fields, Illinois, Police Department outlined a patrol response to a mass killing event. “You have to have the mindset ready to respond immediately to these types of attacks…this will be a fight by the patrol officer in the first minutes of the attack,” Chudwin said. “This type of incident is going to be settled in the first 20 minutes, and it’s going to be affected by patrol. The event may still be ongoing, but by responding quickly, the severity of the attack can be seriously mitigated.”

1. There likely won’t be a specific warning ahead of time.

2. A failure to immediately and effectively fight will result in innocents dying.

3. A lack of preparation and training ensures failure.

4. A lack of command and leadership inspires failure.

Often underappreciated is the art of target hardening, or making a location as impenetrable as you reasonably can. Unfortunately, in a school, this is difficult because the needs of a conducive educational environment can seem to conflict with the needs of a secure one.

Bad guys also look for easy prey. That is why all target hardening should focus on the key elements of deterring, delaying and disrupting an attacker’s flow. Deterrence starts beyond a building’s walls. It starts by sending a message that getting inside is almost impossible. You have to send a message and present a picture of impenetrability.

Delaying starts and ends with controlling access. No one should have free reign to go into and out of a building, and anyone entering should be known. These days, technologies exist that can perform an automated criminal check when a driver’s license is produced and only grant access after that check is completed.

Disruption commences from the point of entry until the threat is eliminated. In the case of buildings, disruption includes locked doors, effective communications, sound and light diversions, and impediments that force an attacker to adjust.

In the aforementioned active-shooter drill, the “attacker” encountered a locked door—a deterrent. They focused on breaching the door, delaying them. This led to the “attacker” not seeing the assault team coming, resulting in a quick threat neutralization, or disruption. All of this came from simply locking a door.

One of the first points realized during an active shooter drill held by the Lower Makefield Police Department (LMPD) in Pennsylvania was the need for command. Without it, nothing else matters. The command must be effective, cohesive and coherent to increase command effectiveness of an incident response. That command could be a lone officer taking charge or the chief showing up on scene. Regardless, someone needs to take charge of the scene and direct assets with the overall scene in mind.

Chief Ken Coluzzi of the LMPD, who spent the earlier part of his career running the Philadelphia Police Department’s homicide unit, was the host of this drill. Coluzzi said, “Events occur quickly and can also devolve quickly. It’s imperative that once law enforcement arrives on scene, they act effectively but quickly to thwart further damage. This means making decisions rapidly and having those decisions come from one point.”

Once you have command, the direction of the response is the next critical part of a plan. Either from a prearranged or on-scene process, developing a plan, no matter how rudimentary, is a necessity. One of the tools that can help is having access to the building’s blueprint, which would make direction easier. These could be located in an office, on a laptop or in a locked box outside the building. Regardless, the incident commander needs to have a clear understanding of where to send officers and how to secure the scene.

Lieutenant Jason Braim, the coordinator of the drill, said, “The most important thing I think we learned today was that having situational awareness and realistic training is key, and doing this type of coordinated training gives us a chance to see what works and what doesn’t, which will help us better prepare for when we have to respond.”

Communications are absolutely critical. Captain Bob Lewis of the LMPD said, “We try to train and teach our folks that once you arrive on scene, someone must take charge not only of the scene but of the communications and become the ‘comm link’ for all of the responding units. This will enable the response to be better coordinated and effective.”

If an active shooter incident happens, it quickly becomes larger than just a police matter, which became apparent during the drill as representatives from the school district, fire department, other police departments and emergency medical units were on hand.

Coluzzi said, “In reality, the police are only part of the response. You’ll need all these other community entities there in supporting functions to handle the tertiary issues that the police don’t have the expertise or time to handle.” The chief continued, “The best way to handle an incident like this is teach, train and coalesce all the emergency response entities. Once you’ve done those three things, you’ve take a great step to target hardening your own community.” 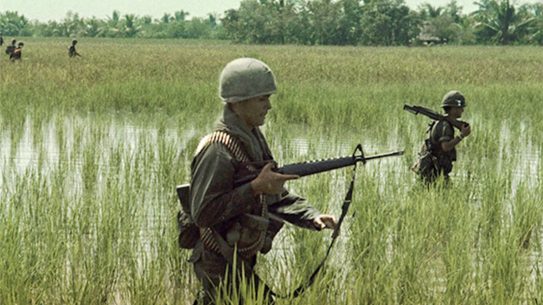