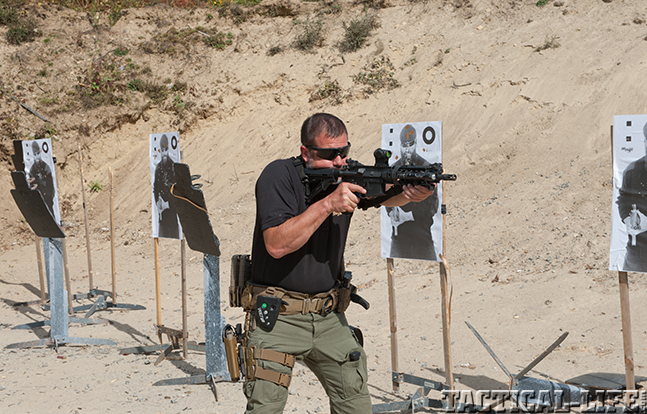 Lately I’ve been drawn to the idea of a patrol rifle with a low-power optic. I wanted one rifle that worked as a true deployment platform yet could compete and even win at 3-Gun competitions. The Sig Sauer Academy‘s Advanced Defensive Rifle class seemed a perfect test venue for the concept. Designed to “push students to the highest levels” over two days, 1,000 rounds and a number of shooting conditions, the course will work the students and their equipment pretty hard.

Never a huge AR fan to begin with, my ideas tend to wander a bit from particular builders. In other words, I needed a custom build, so I enlisted Ernie Bray at Red Creek Tactical. Like most custom builders these days, he’s very busy and has lengthy delivery times, but his build quality is unsurpassed. He provides the added benefit of artistry with Cerakote. For my rifle, I required simplicity, light weight and complete reliability. Make no mistake, this is a custom rifle—not a bargain basement model—but you can also use a production gun for this concept.

My rifle’s upper and lower receivers and forend are from Seekins Precision. The company’s MCSR rail is very light and uses the KeyMod accessory system. It covers a Lilja 16-inch, stainless barrel and a mid-length gas system. Chambered in .223 Wylde, the barrel also has custom fluting and a medium contour for reduced weight. The barrel features three-groove, 1-in-8-inch-twist rifling and is capped with a three-pronged SureFire SOCOM flash suppressor.

The rifle also utilizes MicroMOA’s “Govnah” adjustable gas block, which utilizes plates that can be custom-drilled for perfectly tuning the gun for cartridges and suppressor use. No tools are needed for tuning the gas block, and there are no adjustments to come loose. Two- and three-position plates are available. During installation, because of time constraints, we made an educated guess as to the positions of the three gas settings: the middle for normal use, a larger hole for a dirty gun and a smaller hole for suppressor use. We also installed a Sprinco return spring, a Brownells AR-Restor buffer and a Young National Match Lite bolt carrier group for incredibly smooth operation.

“This is a great class. It works your rifle hard and around obstacles, simulating real-world scenarios.”

For a trigger we installed Geissele’s Super Dynamic Enhanced unit, which is designed for hard use and offers a flat, two-stage trigger for maximum precision. The rifle was then given a Cerakote finish with Red Creek’s custom camouflage pattern consisting of four colors, three of which are infrared absorbing. When examined closely, you’ll also notice the camo’s skull pattern, which really sets the custom rifle apart.

For targeting, I added a Bushnell 1-6.5x24mm Elite Tactical scope with a second-focal-plane BTR-2 reticle in an Alamo’s Four Star mount, making it easy to remove and reinstall the scope without a loss in zero. I installed backup iron sights from Troy Industries as well as a SureFire M600 Ultra Scout WeaponLight.

The first day of the Advanced Defensive Rifle course, we checked our rifles’ zeroes out to 50 yards. Most drills were geared towards using rifles in an urban environment, making this distance pretty normal. Once on target, we practiced reloading, clearing malfunctions and transitioning from our rifles to our pistols on both our strong and support sides. After a few rounds, sighting was surprisingly intuitive—this optic/rifle setup was already growing on me.

Starting with the MicroMOA gas block on the largest setting, the rifle was a bit “over-gassed” at first. I moved it to the middle position, and the rifle functioned perfectly and smoothly, and it was soft-shooting. This thing should be just about perfect after some custom tuning. We finished the first day by shooting on the move as well as firing from various positions and behind barricades. By the end of the day, I was sold on the optic/rifle concept, and the rifle itself was flawless.

The second day started with some interesting drills. The first was a variation of a Special Forces qualification. Fire 30 rounds as fast as you can, reload and fire one round—all into a 10-inch circle 10 yards away. Any shots outside the circle earn an immediate disqualification. An initial run time of 10 seconds proved the value of a smooth rifle and solid trigger.

Next came shooting from both sides around barricades. This is why ambidextrous controls have become a favorite for me, and they proved themselves here. The last drill before the break involved transitions. We’d use our rifles on a paper target, then transition to our pistols and knock down steel plates on a rack until they were all down. The instructors encouraged smooth transitions and complete control while bringing our pistols backing into their holsters.

“The class was well thought out, well run, and proved to be a good test of both the rifle and operator.”

The course ended with drills from the “towers.” My favorite name for these is provided by Scott Ballard, a long-time trainer, who calls them the “Towers of Mordor.” It’s an apt description, and it avoids the now-cliché term “tactical.” You move up and down through a tower, shooting at various positions. None of these positions are conventional, nor do they allow you any normal means of support. You are also called upon to shoot from either side. Not only does this get your heart going, but it also increases your stress. In short, it was a great culmination to a solid class that encompassed all we learned.

The class was well thought out, well run, and proved to be a good test of both the rifle and operator. Several guns were represented, including a SIG556R and an FN SCAR. Tim Arnold, our lead instructor, did a fantastic job, even with a group as diverse as ours. This is a great class. It works your rifle hard and around obstacles, simulating real-world scenarios.

Two things struck me regarding my rifle concept. The low-power scope worked incredibly well at close range. Using this setup from muzzle contact to 50 yards, it was fast and accurate. It was just like any other red dot—just bigger and clearer. I also never had an issue with eye relief, and the field of view was better. This setup is incredibly versatile, fast and suited to most realistic LE engagements.

Secondly, the lighter-weight two-stage trigger worked well. At close ranges and for repeat shots, I just pressed through the first stage, operating it like a 4.5-pound, single-stage trigger. When I needed accurate shots, I used both stages. The trigger was slick and provided for superb control. During testing at home using Silver State’s 77-grain SMK ammunition, it was easy to make half-inch groups. In rapid fire, the trigger remained reliable, controllable and fast—it just does not get any better.

As equipped, I would not hesitate a second in taking this rifle to work. In fact, it will see time at my department’s range. Granted, it is a custom rifle, but it definitely proved the concept. Future training should prove interesting and a ton of fun! For more information, call 603-610-3400 or visit sigsaueracademy.com. 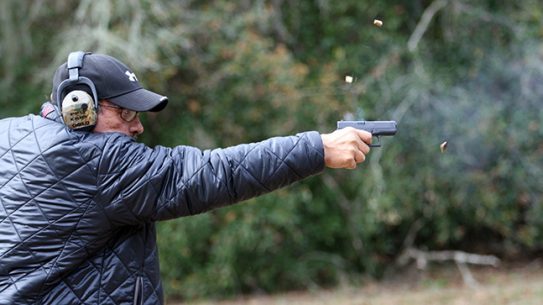 The perfectly slim, reliable and familiar pocket G42, chambered in .380, is serving up...