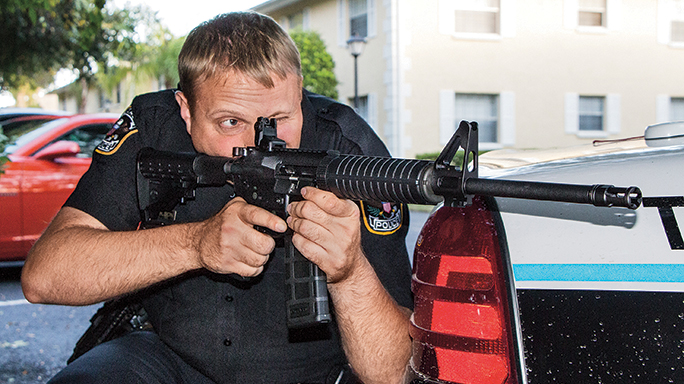 1 of 2
Basic Training: Run and Gun with Rimfires
By installing one of the many .22 LR conversion kits on the market, officers can learn the AR and its controls at a fraction of the price. 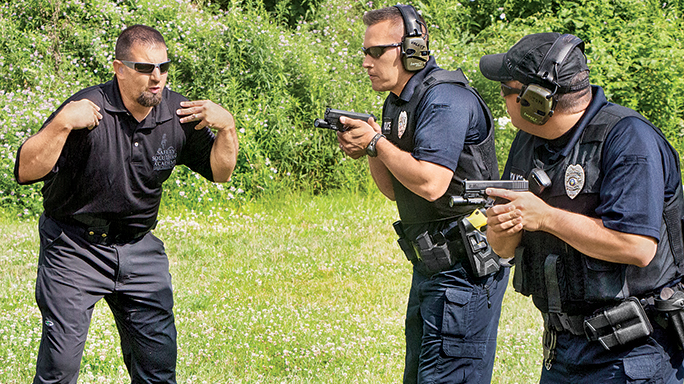 2 of 2
Basic Training: Run and Gun with Rimfires
Like many things in life, rimfire training requires context to be properly used. 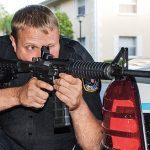 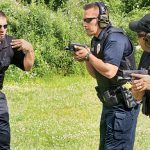 Budget restrictions are one of the first things that come to mind when the topic of using rimfire guns for police training comes up. Administrators may eye the .22 LR as a cost-friendly firearms training alternative, but is it really wise to teach officers a lifesaving skill with anything other than the actual tools they will need to use?

Like many things in life, rimfire training requires context to be properly used. All other things being equal, officers should train with the exact tools that they carry on duty. Things are never equal, however, and training compromises are always made. Even the strongest advocates for training only with centerfire ammunition will concede to training will less-expensive FMJ ammo instead of the high-cost duty load. Rimfire training, in the proper context, can be an effective part of a training program.

Before considering the potential uses of rimfire training, consider the possible problems. Among the risks are bad habits developed from a lack of recoil management skill development and the operation of a weapon with different controls.

Recoil management skills are important. Rimfire rounds recoil at a mere fraction of the impulse that a centerfire service caliber will. An officer needs to learn how to properly control the recoil to land multiple hits on an attacker.

Another possible problem can arise due to the weapon being used. If a kit is used to convert a rifle or pistol to .22 LR, the controls are likely to be the same as the unmodified duty gun. However, if the officer is using a .22-caliber gun that is not a converted duty weapon, the controls could be very different. The more practice the officer does with the gun, the less likely he is to use the correct controls on his centerfire duty gun.

While a lack of recoil can be a benefit in the situations described further into this article, there is little redeeming about having different controls on the weapons being trained. For the remainder of this article, assume that the rimfire guns are duty guns that have been converted to fire .22 LR.

Despite the potential risks, there are specific situations in which trainers can incorporate rimfire shooting to enhance the overall firearms training program. The key is to use rimfire training only for specific purposes where the rounds offer a distinct training advantage.

Generally, the .22 LR offers low recoil, little muzzle blast and can be adapted to a wide range of duty weapons. Combined with the lower cost of the .22 compared to centerfire cartridges, there are some specific scenarios where the caliber makes sense for training. While there are undoubtedly other cases, there are four areas where rimfire guns may be particularly useful in training: new shooters, problem shooters, injury rehabilitation and introduction of skills with the weak hand.

Many recruits entering the police academy have little to no experience with shooting a gun. Some of them are further handicapped with preconceived notions about recoil, noise or that the weapons have some inherent evil built into them. For new shooters, it is especially important to introduce them to shooting in a way that will build their confidence with the firearm.

Compared to a service caliber, a .22 LR round has less report, softer recoil and little muzzle flash. These things will help a new cop learn the fundamentals of safe gun handling skills, trigger control and sight alignment without introducing a flinch that a more powerful load can bring on.

While few would argue that the police academy should be designed to be fun, the fact is people tend to learn more quickly when they enjoy the subject. For an apprehensive new shooter, removing the fear of noise and recoil can make shooting much more enjoyable. If the recruits are not afraid of their guns, and they feel in control of the weapon, they are much more likely to listen to the instructions and more quickly grasp the fundamentals of accurate shooting.

In every department, there are a certain number of cops who just barely pass firearms qualifications. In every other respect, they may be excellent officers who do a fantastic job on the street. However, they have a problem when it comes to putting rounds downrange. Departments should take steps to ensure that these otherwise excellent cops get the training they need to protect themselves and others on the street.

For these problem shooters, working on the fundamentals with a rimfire gun can bring the noise, flash and recoil down to a manageable level. Once there, an instructor can work with them to build core shooting principles. Depending on the needs of the officer, an instructor can bring the training back to the very basics of shooting and work with him or her for a longer time with less fatigue.

One of the long-standing techniques for improving shooting technique is dry firing. While dry-fire practice has its place, the rimfire weapon allows an officer and instructor to see where rounds are hitting. This can be critical for the officers to get positive feedback on technique improvement, and it can also help the instructor to diagnose shooting errors.

Police work is a contact sport. Sometimes officers go down with injuries. From my own experiences, I know that injuries to the hands, arms and elbows can cause difficulties in shooting. If an officer has an injured appendage—especially one requiring surgery and physical therapy—he or she will need to train back up with the duty weapons.

Firearms instructors should work with the officer, and within the limits set by the medical professionals, to get the body back to the pre-injury level of firearms competency. Where the recoil of a 9mm or .40 S&W might be too much, the light recoil of a .22 LR may allow the officer to get back on the range for short sessions of instruction.

Shooting from the weak hand is an important skill for an officer to master. The problem is few people have anywhere near the strength and dexterity in the support hand that they have in the primary.

For the majority of law enforcement firearms training, full-power loads in the issued duty weapon are likely to best prepare an officer for a violent encounter. However, in specific cases, duty weapons converted to fire .22 LR can provide instructors with a training tool to help introduce new shooters to basic techniques, develop the skills of problem shooters and introduce new skills to otherwise competent shooters. 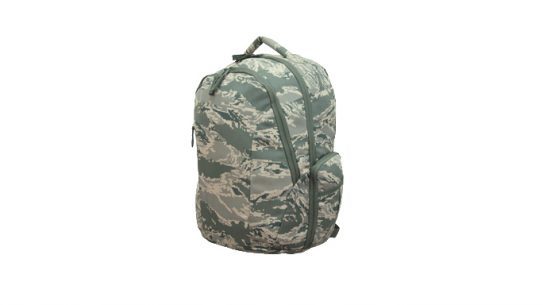