by Chad Adams
in Tactics & Training
0

The U.S. War on Terror is now in its eighth year—a mind-boggling statistic no one could have predicted after this country was ruthlessly attacked on September 11, 2001. With details only now beginning to emerge, some covert military units were operating in Afghanistan within weeks of the towers falling. As military troop presence and combat operations escalated in Afghanistan, so did the toll on personnel—not to mention the equipment utilized by our warfighters.

Add to that the ongoing operations in Iraq, the current inventory of U.S. military combat gear has gone through an incredible amount of field use. With some units making their sixth, seventh or eighth combat deployments since these wars began, U.S. personnel and equipment are seeing use not seen in decades–in some instances, possibly in history.

So in the last eight years, Barrett armorers have seen rifles that literally have gone to hell and back. From early engagements in the hills of Tora Bora, to the 2003 invasion of Iraq, to the nightmare of reclaiming Fallujah in 2004, to current redeployments in both theaters of war. While many of the soldiers seeing combat have changed over that time, one thing remains constant–the Barrett M107 keeps putting rounds downrange.
“We get a lot of feedback from the units that come and visit us on their garrison time, and of course, e-mail and phone calls,” said Don Cook, who is in charge of the service department at Barrett. “They love the weapon system for its capability. It’s probably the number one addition for the ground commander of the infantry units—the infantry squad or platoon—so that they have long-range capabilities.”

When these units do rotate back stateside, part of each unit’s standard operating procedure is to take inventory of all weapon systems. This includes certain maintenance steps, and with the M107, virtually anything beyond basic gunsmithing jobs requires the weapon to be sent back to Barrett in Murfreesboro, TN. That constant rotation of rifles into combat and back to the factory for maintenance has enabled Barrett to learn a tremendous amount about the M107, and that information is quickly processed in two ways: product improvement and armorer knowledge.

“The rifles are hanging in there pretty good,” Cook said. “We know that small, minute items have been tested over there, what worked and what didn’t, and we’ve learned from that.” 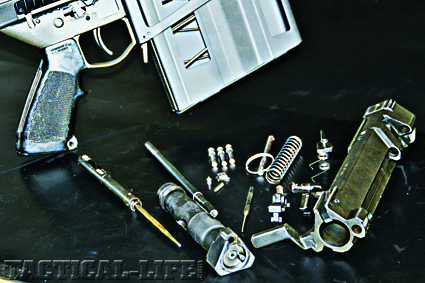 Learning the lessons
The best example of an individual part that had room for improvement, according to Cook, was the main spring buffer of the M107. Due to the intense heat experienced fighting in the Iraqi desert, under extreme environmental conditions the old version of this part had the ability to expand beyond its maximum allowable body diameter beyond the tolerances set for that part.

“Some of our improved parts have been completely redesigned with the thought in mind to fix the culprit, the failure,” said Cook. “One of the biggest things has been the buffer, under that extreme heat.”
When operators turned the weapon in to Army armorers, this problem was often misdiagnosed as a bent receiver. After seeing this problem come back to the factory, Cook and his team determined that the main spring buffer was the culprit. Barrett immediately went to work, and the result is a new part made from a new material—one that is resistant to expansion under those extreme conditions. When new rifles are manufactured they receive the new main spring buffer. Also, when older rifles come in for maintenance, they also get retrofitted for the new part.

This main spring buffer scenario shows the connection between maker/user/maintenance. When something happens, Barrett can immediately address the problem, and this is of great benefit to the Army. This flow of information also benefits students in the armorer course. A soldier sent by the Army and put through Barrett course now benefits from the know­ledge base that Barrett has gained through servicing the weapon system. The same goes for a civilian who picks up a used gun and puts a tremendous amount of rounds downrange.
Servicing Army rifles has also illuminated problems that have little to do with Barrett, yet still impact the capability of the solider in the field. Many rifles sent in for maintenance have exhibited a tremendous amount of pitting and rust inside the barrel, due to firing corrosive ammo.

“They’ve run into corrosive lots,” Cook said. “A lot of that stuff is still in storage all throughout the world. Anything older than about 1955 or so is corrosive.”

When operators in the field fire corrosive lots of ammunition they often don’t know it and, therefore, don’t clean the weapon properly. Let weeks, months or a year go by, and inside the barrel you have what in effect is like an acid working on the metal, eating up the lands and grooves. In time, accuracy is severely degraded. Knowing this allows Barrett Firearms to discuss alternatives that would help alleviate the problem, such as chrome-lining the bores. For the armorer course students, it educates them on how prevalent the problem is, what to look for and how to correct it. 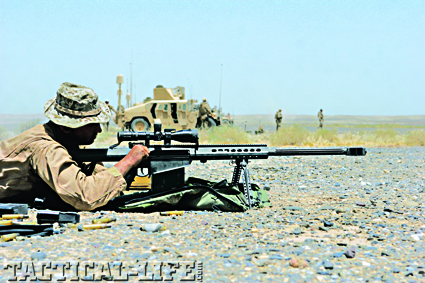 Combat application
Diagnosing problems and developing solutions—all with a turnaround that meets the timetables of the U.S. military—takes a tremendous amount of knowledge. But Cook, a retired Marine Gunnery Sgt. and armorer at Quantico, and his team have it. Nothing illustrates that point better than the often-told tale of U.S. Marines who encountered a problem with their Model 82A3 during a firefight. When the rifle wouldn’t fire and the Marines desperately needed to engage targets, a team member consulted the manual and found a phone number to the factory. Using a satellite phone, he called and was connected to Cook. After a series of questions and answers, Cook was able to determine that a part had been bent during disassembly the night before while the Marines were cleaning the rifle. After instructing them how to expediently beat the part back into working order right there in the field, a resounding “boom” of .50 BMG report brought an end to the conversation.

It’s that type of knowledge by Cook, Bill Hass and others that have made Barrett’s armorer courses extremely popular with the U.S. military. In fact, Barrett not only conducts a series of courses at the factory, but the company has a mobile training team as well.

“We’ve done quite a bit for the Army—I’ve been all over the U.S. doing training with specific units,” Cook said. “They’ve lost experience with guys rotating and getting out. And I give them everything I got.”
At the end of the day, students of any one of the Barrett armorer courses leave with a tremendous amount of understanding. Whether those students are military, law enforcement or civilian, they each benefit from Barrett’s extensive base of firearm knowledge–much of it gained in the hands of American warfighters fighting abroad.