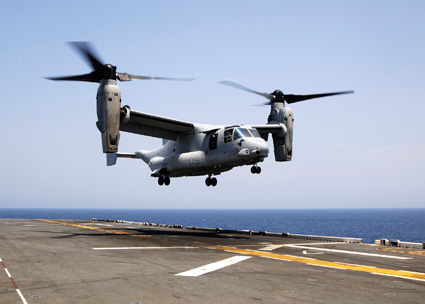 More than two centuries ago, British ships of the line sailed leisurely in a light wind toward a combined French and Spanish fleet near the Cape of Trafalgar. After sighting the enemy, the Royal Navy took more than two hours to close for an ultimately victorious battle.

Today, closing with the enemy takes a few minutes at most, as the Royal Navy learned in the Falklands War. In 1982, the U.K. dispatched a fleet of nearly 60 combat and support ships and submarines to retake the Falkland Islands after Argentina captured the territory. Argentine Air Force fighters flying from land bases repeatedly attacked the Royal Navy battle group with bombs, cannon fire and Exocet missiles, sinking two destroyers, two frigates, a landing support ship, an amphibious craft and a maritime container ship—seven in all—while damaging 10 other vessels.

The Threat Just Over the Horizon
For anti-air defense, the RN had to rely on shipboard radar systems that could acquire targets only to the horizon, about 40 miles away. Argentina fielded Mach 1 aircraft and missiles, both very slow by today’s standards, but their platforms could strike from that range with only one minute to target. In s 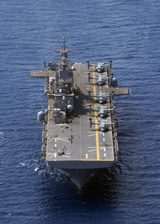 ome cases, terrain masking shortened exposure of attacking aircraft to seconds. The results of vessels lost, more than a hundred hands from the Navy, Auxiliary and Merchant Navy personnel killed (nearly half the total losses), plus many more wounded, triggered an urgent requirement for improved AEW (Airborne Early Warning) capabilities.

In the war’s aftermath, the British Ministry of Defence directed quick development efforts to expand AEW capabilities far beyond the horizon. This led to installation of Thorn-EMI ARI 5930/3 Searchwater radar in an inflatable dome on a rotating mount, and operator stations in Sikorsky Westland Sea King helicopters, then primarily anti-submarine warfare platforms, to provide organic AEW in force projection operations.

The Royal Navy has upgraded the system to the AEW Mark 7 standard, with more powerful Thales Defence Searchwater 2000AEW X band pulse Doppler radar and mission control stations, redesignating Sea Kings Airborne Surveillance and Area Control (ASaC). Designated “Cerberus” for the mythical three-headed dog who guards the gates of Hades, the system provides comprehensive air defense to a radius of 150 nautical miles and detects low-flying aircraft attempting to slip under ship-borne radar. Although today’s Mach 3 missiles require just a few minutes to reach their targets from far beyond the horizon, Cerberus’ long-range detection translates into enough lead time to mount effective shipboard defenses. Cerberus also provides tactical control to the Sea Harrier and other carrier- and land-based combat aircraft that can intercept intruders. These aircraft participated with distinction in Operation Iraqi Freedom, capable of operating both from carrier and warship decks.

Who To Carry the New Shield?
In the future, the RN will replace the Cerberus platform, but a fixed wing alternative such as the E-2C Hawkeye is unlikely, since the British government has no plans to build an aircraft carrier equipped with catapults and traps for airplane takeoffs and landings. A possible replacement is the Agusta Westland Merlin helicopter, but a far more capable radar platform is the Bell Boeing V-22 Osprey tiltrotor.

Now on deployment in Iraq, the V-22 has been demonstrating its revolutionary capabilities for a year. The Osprey is a vertical takeoff and landing aircraft, but once off the ground it operates as a turboprop airplane with commensurate speed and range, enabling the platform to reach a surveillance perimeter three times farther from its fleet than a helicopter in the same travel time. Other important advantages for the AEW mission include 4.5 hours on station, three times more than a helicopter, mission altitude up to 15,000 feet, compared to a helicopter’s maximum of about 8,000.

These performance capabilities translate into much longer detection ranges, giving task forces precious minutes to activate defenses that can shield effectively against aircraft or missile attacks.

The Royal Navy has named this planned capability MASC (Maritime Airborne Surveillance & Control). Efforts are under way by U.S. Naval Sea Systems Command (NAVSEA) to demonstrate the AEW mission with a V-22 using Cerberus configured in a roll-on, roll-off package designated as a TOSS (Tactical Organic Sensing System). The V-22’s cabin can easily accommodate the entire system, including operator stations, associated hardware and the pivoting radome that deploys from the aircraft’s aft ramp area The same system could deploy in C-27J, C-130 or CN-235 fixed-wing transport aircraft or in MH-53, CH-47 or US101 helicopters, but only the V-22 combines the capabilities of both these aircraft types.

TOSS Into the Air On An Osprey
TOSS gives naval vessels the ability to process air, land and sea data with Link-16 communications and an Improved Data Modem, and to defend against long-range aerial attacks without reliance on fixed-wing AEW assets like the Hawkeye flying either from a conventional aircraft carrier deck or land bases. The system will detect targets as diverse as bomber, transport and snooper aircraft, cruise missiles, submarine periscopes, missiles, patrol boats, jet skis plus tanks and other land vehicles. Detection ranges, dependent on radar aspect, give surface vessels plenty of warning to prepare for attack, collect vital intelligence, or validate and prosecute targets.

The V-22 TOSS clearly can fill a gap in naval ISR (Intelligence Surveillance and Reconnaissance) capabilities, but not only for the Royal Navy. The U.S. Navy is adapting to new maritime strategic requirements that call for expansion from 19 interdependent battle groups with 12 large aircraft carriers to 37 independent battle groups configured for amphibious operations, surface action and littoral combat. Since many of these newly designated groups do not include carriers, they must depend on the Hawkeye fleet, few in number and usually dedicated to carrier battle group support, unmanned aerial vehicles or high-demand/low-density strategic ISR assets such as JSTARS or AWACS. National-level capabilities must handle emergent large-scale issues, so they are not generally available for around-the-clock tactical AEW to support crisis response or limited contingency operations in deep-ocean or littoral areas far from home. The only real alternative is to develop organic VTOL ISR capabilities that can operated from the helo decks of surface combatants.

Osprey’s Unique Ability
Today, the V-22 is the only platform with the demonstrated flexibility, speed and range to perform AEW for extended maritime operations without aircraft carrier support and far from land bases. The Osprey’s operational experience increases daily with current Marine deployments in Iraq and forthcoming CV-22 deployments with the U.S. Air Force Special Operations Command. The aircraft has met or exceeded performance expectations in service, and it has the capacity to handle missions that include network-enabled, digitally interoperable expeditionary aviation combat support. TOSS is a strong Joint Capability Technology Demonstration candidate, and funding to test the technical feasibility of TOSS may soon be available. Since both aircraft and sensor system are proven, the demonstration will focus primarily on integration of the plug-and-play Cerberus package and determination of Measures of Effectiveness to validate the approach. Integration of Cerberus into other aircraft is possible and may also be subject to test and evaluation, but the V-22 may be the most versatile platform available to provide organic over-the-horizon AEW for U.S. fleet assets. As the Navy defines its future strategic roles and equips to carry out these missions, the V-22 is primed to become an important asset, protecting the naval ships and sailors in future maritime operations.

Cost Versus Value: Defining V-22 Roles and Missions
As the U.S. Navy redefines its national security responsibilities, it will closely examine the applicability of current and planned assets to ensure they provide full value for the cost of modernization or development. These investments can be enormous, and government reviewers frequently expect immediate and significant payoffs in capabilities.

Using standard cost-benefit analysis, replacing the current COD (Carrier Onboard Delivery) aircraft fleet with V-22 Osprey tiltrotors is difficult to justify. The C-2 Greyhound, derived from the E-2C Hawkeye with a wider fuselage and a rear cargo ramp, has been in service for more than 40 years, and the Navy completed procurement of 39 new airframes, the current fleet, nearly 20 years ago. Although V-22 performance roughly matches the Greyhound performance, the current tiltrotor unit flyaway cost is about half again as much as the C-2, making fleet replacement an expensive proposition.

This assessment does not, however, take into account the value tiltrotor technology brings to the COD mission. For example, with V-22s, carrier decks are no longer essential to airborne fleet logistics. Since tiltrotors can operate without catapults and traps, they eliminate any need to transload cargo from carriers, which serve as de facto central warehouses, to other vessels. Ospreys can fly directly to any ship with a helo deck, and also can hover over ships or subs that can’t accommodate helicopters, using a hoist to deliver or pick up loads. Calculating the cost of dedicated carrier deck time for logistics support operations shows that V-22 could vastly increase fleet operational effectiveness, more than offsetting any increased aircraft costs. Factors include deck time that could be allocated to combat aircraft, as well as the time and effort saved in flying point-to-point COD and VOD missions, plus the savings derived by avoiding carrier battle group relocations to facilitate logistics support.

Many Missions for One Price
From a cost perspective, moreover, versatility as a COD/VOD platform is only part of a very positive V-22 story. Since the aircraft requires minimal configuration for logistics support, the tiltrotor can meet multiple mission requirements, including TOSS with the mission system in a roll-on, roll-off configuration, CSAR (combat search and rescue), expeditionary combat command, VERTREP (vertical replenishment at sea) and several other tasks. Multi-mission capability makes V-22 procurement even more sensible, since the design can handle so many disparate assignments without increasing a carrier battle group’s aircraft inventory. And, because V-22s can operate independently from carriers, other task forces—surface action or littoral combat groups—can handle their own missions without reliance on carrier aircraft for ISR (intelligence, surveillance and reconnaissance).

All in all, value strongly favors applications of tiltrotor technology for a wide variety of combat support missions that promise to reinforce the aircraft’s growing reputation. In military hardware, good reputations are hard-won in the crucible of combat, in the tiltrototr’s case from success in Marine Corps combat assault support and Air Force long-range special operations. The V-22 is proving itself as a transformational platform that will help to revolutionize U.S. and allied military activities around the world.

More than two centuries ago, British ships of the line sailed leisurely in a…