by Jack Satterfield
in Tactics & Training
0

0
SHARES
0
VIEWS
Share on FacebookShare on Twitter
A U.S. soldier from a military transition team rushes to the scene of a Vehicle Borne IED explosion to treat injured Iraqi civilians in Mosul, Iraq. (DoD photo)

The U.S. armed forces face few more serious problems than countering improvised explosive devices (IEDs). Government agencies and major defense companies, including Raytheon, have taken rapid action to defeat the threat. Urgency is critical. Reports from Afghanistan and Iraq show that roadside bombs and ambushes account for many American and coalition casualties. The Department of Defense has invested considerable time and money to shield troops against these threats, but insurgents are exacting unacceptably high costs in young Americans killed or injured.

Amored Answers
Up-armored Humvees have helped, but troops in theater are increasingly reliant on Mine Resistant Ambush Protected vehicles (MRAPs). These massive trucks, really battleships on wheels, provide protection by shielding against and deflecting blast forces, but they are unwieldy, expensive and may become obsolete if war-fighting techniques change. High costs are justifiable in terms of lives saved, but every expended defense dollar signifies a budget and policy choice, leaving other very important needs unfunded.

Armor is not limited to vehicles. Individual troops now drape themselves in far more effective gear with amazing resilience against ballistic strikes. Unfortunately, individual protection is not likely to withstand the power of a large explosion. Furthermore, wrapping troops in protective cocoons limits their mobility and speed. Even if the weight is bearable, plates or pads secured with straps to the body and extremities can be clumsy.

Active countermeasures, sensor systems that can detect hidden or buried objects, also hold promise against IEDs. Systems utilizing ground-penetrating radar, thermal or infrared imagery, magnetic anomaly detection or other methods may enable troops on patrol to identify and neutralize weapons lying in wait for them. Once again, however, most of these approaches are not yet ready. 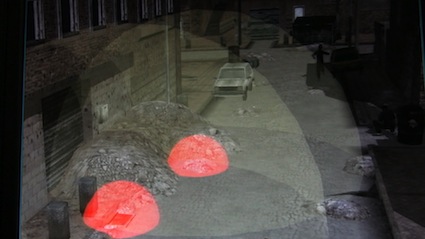 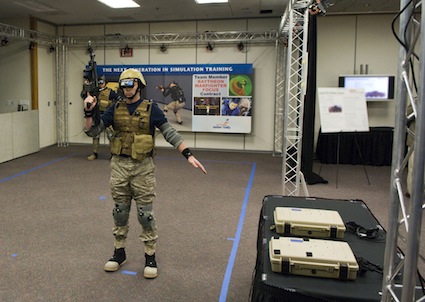 Raytheon, one of the nation’s largest defense contractors, has taken a leadership role in this effort. The company established its own IED Defeat Task Force in 2006 to work with the government’s counter-IED efforts and get improved technology to troops heading for combat theaters.

Raytheon’s latest effort, introduced at the Association of the U.S. Army’s annual meeting in Washington, D.C., is the IED reality trainer, a system the company defines as a “portable, fully immersive” training simulation that incorporates commercial off-the-shelf components to provide simultaneous, realistic simulation training for individuals, teams or units.

John Baggott, senior business manager for Raytheon, has been involved in the system’s development and brings direct experience to the job, serving as an Army training brigade commander. Baggott visited several Army sites to find ways to increase training effectiveness. “I frequently discovered training shortfalls at soldiers’ home posts,” he explained. “Troops come home from deployments, head for other schools or focus on their families, then have to prepare for redeployment. This means soldiers often miss opportunities for refresher training that can sharpen their skills.”

Baggott quickly decided that simulation training encompassing actual threats in-theater would improve training, and simulation would facilitate the entire process, saving time and money as more people completed training. “We wanted to simulate threats when troops are exposed to IEDs to enhance safety in war theaters,” he explained. Teaming with Motion Reality, a leader in 3D computer graphic animation of human motion, and BreakAway, a developer of digital gaming and simulation for military, security, healthcare and corporate customers, Raytheon quickly developed the simulation environment to meet stringent military training requirements. The system utilizes heads-up displays (HUDs) attached to trainees’ helmets, enabling them to move untethered with the same equipment they carry on patrol. In addition, trainees can use an advanced version of the multiple integrated laser engagement system (MILES). MILES registers the effects of incoming fire and simulates the effects of combat, giving troops immediate feedback on the effectiveness of their tactics.

“Our HUD provides trainees with a 3D and stereo effect that is very realistic. We can instantly program urban environments, outside or in buildings, as well as open terrain for soldiers preparing for combat,” Baggott said. “Troops are free to walk around and learn to operate more effectively in environments they face when they deploy. Our system also enables us to move beyond individual training regimes and involve squads and other small units.” 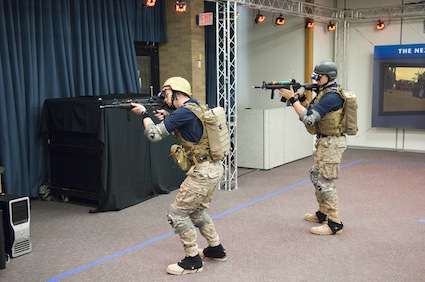 Ready to Adapt
Operational realism is the key, and training developers can use daily updates from the field to change scenarios. “When threats change, we change the game,” said Baggott. “We make the simulated environment as real as possible, even with IEDs, so the situation is relevant and operationally correct.”

Raytheon can structure training for any location. “As troops increase operations in Afghanistan, we design simulation to replicate conditions in Kabul,” Baggott noted. “We’re integrators, so we’ll integrate the best of all technology to make training useful.”

Because Raytheon relies on HUDs, their system is equally applicable to mounted or dismounted training, eliminating tethers or any other physical connection to digital training systems. The ideal training structure is a warehouse or other relatively large open space that can accommodate video cameras to tape training sessions and show troops their actions during exercises, but Raytheon can adapt to any facility. “The HUD makes me feel like I’m moving straight ahead,” said Baggott.

“Soldiers using HUDs feel just like they do when they’re really on patrol because the system eliminates possible disorientation and motion sickness. We can build barricades, walls and other barriers to enhance the training with HUDs. Eventually, we can add other systems that can stimulate tactile responses to add realism to simulations.” 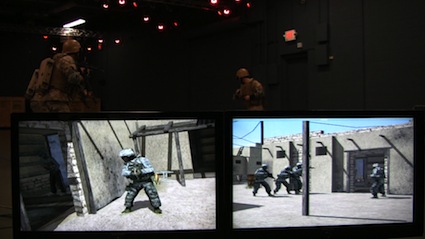 Imagery from Raytheon’s IED reality trainer is superimposed on a photo of soldiers during a training demonstration. Imagery is based on each participant’s position in the simulation exercise. (Raytheon photo) 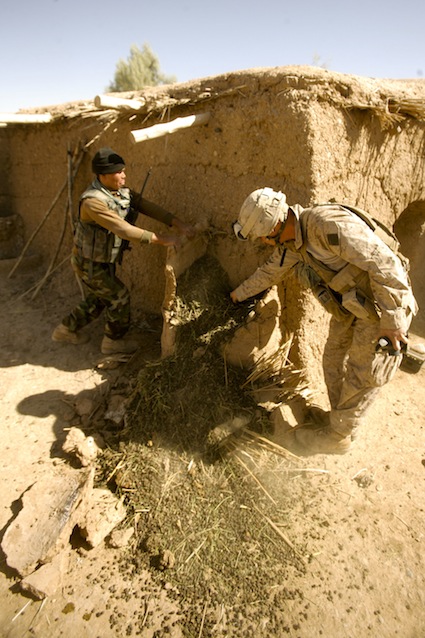 Baggott added that the system also provides real-time training for staff. “We can provide instant information to battalion staff or a company commander who may or may not be in the simulation exercise with a unit so they can direct action as it unfolds,” he said. “Unit commanders cannot predict the steps in our simulation, so they must operate under pressure to make the right decisions.” Raytheon’s teammate BreakAway has incorporated a new technology for creating simulations called “mōsbē” to enhance the decision-making capabilities of the training system. 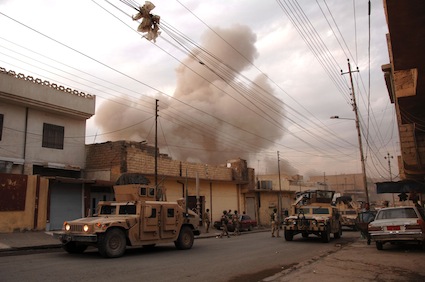 An explosion pushes a cloud of smoke in the sky, the result of the 2nd Division Iraqi Army bomb squad destroying multiple IEDs found during a neighborhood raid in Mosul, Iraq. The 2nd Iraqi Army Division is tasked with large-scale operations to rid the city of Mosul and its surrounding areas of the insurgency. (DoD photo)

Raytheon is currently deploying the new system. “The technology is for all first responders,” Baggott concluded. “We are ready to help U.S. and allied military, law enforcement and security forces prepare for the unexpected, avoid injury and come home safely.”