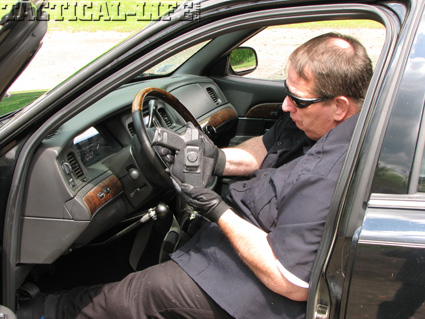 There are millions of people in this country who have mobility problems and partial blindness. Disabled citizens need to protect themselves as much, or more so, than anyone. Here we’ll look at two handicapped shooters to see how they manage and what equipment they use to compensate for their limitations. 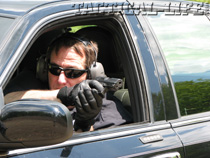 Joe Cartabona
Joe Cartabona may be a familiar name to you. He was a former cop and former head of security at an Ivy League college and was always a small business owner on the side. Because of his knowledge of the law enforcement, consumer and retail side of the business, he was recruited to Colt’s Manufacturing in 1996 and spent five years there as their Director of Handguns. The slew of innovative handguns that Colts brought to the market back then were the result of his leadership.

A diabetic, Cartabona finally had to have a leg amputated a few years ago and now spends much of his time in a wheelchair. In addition to his missing leg and his diabetes, he has eye problems and hand neuropathy. He now runs his gun shop, Personal Defense Specialist, full-time in a town that borders one of the nastiest, crime-ridden, drug-infested cities in Massachusetts. He hasn’t exactly chosen a safe line of work; he thwarted an attempt to kill him and prevented his store’s robbery couple years ago.

Cartabona carries his primary pistol, an HK USP mini-9, in a DeSantis nylon IWB (inside-the-waistband) holster in the front center of his pants. There, from a seated position, he can easily reach under his shirt and access the gun. Worried about having a gun in his hand while he’s using a walker and then possibly losing his balance, Cartabona likes the HK because of its long and not too-light trigger pull. 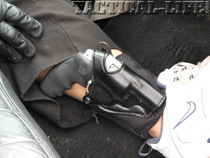 His back-up gun is a S&W snubbie, which he carries in a DeSantis ankle rig. He likes the easy-on/easy-off nature of the Velcro-secured holster, the easy-to-operate snap and that the gun comes out of the holster easily. 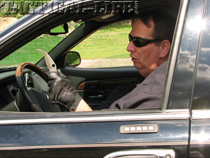 Cartabona’s knife is a Sypderco Civilian because its curved point makes easy to use in a fight with his limited mobility. With it, you just reach out and touch someone; there’s no need for particular slashing angles or powerful thrusts. The glove-friendly hole in the Civilian is a good thing since he usually wears a pair of Uncle Mike’s gloves to operate the wheelchair.  The Civilian’s textured G10 scales are secure in his less-than-sturdy hands and he favors a standard-opening knife because an assisted-opening model knife might fly out of his hands if he’s having a bout of neuropathy.

Cartabona carries his flashlight, OC (oleoresin capsicum) spray, extra mags and his meds in a Maxpedition FATBOY VERSIPACK. It’s the ideal size for him and its well-placed compartments make segregating and accessing his gear a guarantee and reliable. He will also use a Kevlar-lined day pack from BulletBlocker as a briefcase because he can pull it in front of him for cover should he need to – after all, he can’t easily move to cover.

Cartabona opens his shop at noon everyday, and everyday on the way to the shop he stops by the range. He drives his car right down close to the backstop and throws out a soda bottle or something similar. Shooting out of the driver’s side front window, he then expends two pre-loaded magazines shooting the bottle around the range. (I’ve shot with him and he’s a great shot!) At the end of the session, he re-loads his pistol and heads off to work.

Despite a handicap that many would consider going on disability for, Cartabona works hard at a dangerous job, keeps his skills up, and helps a lot of people get the right equipment for their own self-defense needs. His cop awareness remains fine-tuned, too.  If some cretin decides he’s going to hurt the “man in a wheelchair,” my bets are on Cartabona!

Ed Harris
Ed Harris is a New England transplant from sunny California. Growing up in the San Gabriel area, he was a natural athlete and competitive body builder. He now manages a gym full-time in Massachusetts while completing his degree at the University of Massachusetts at Amherst. He has RP (Retinitis pigmentosoa) and its associated night blindness, which Harris was diagnosed with during childhood. 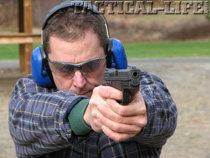 RP is a disease that affects 100,000 Americans and restricts vision to a small cone in the center of the eye. Harris describes it as “looking at the world through a straw.” He is also completely blind in his left eye, the result of a football injury that detached a retina.

With his blind left eye and with only 4 percent vision in his right eye, you might be surprised to learn that he’s an avid firearms enthusiast. Even though he’s legally blind, he has a collection of handguns and rifles, goes to the range as often as he can arrange to (he can’t drive, obviously), and even hunts deer every season. He can do that because the 4 percent vision that he does have is 20/30, and he always hunts with a partner who makes sure that any shots he takes are actually safe to take.

Every year, during deer season in Massachusetts and Vermont, Harris will hunt with his friend Sean King. Both hunters are keenly aware that Harris has limited peripheral vision, so they make a point to always know where the other person is.  Usually they’ll set up in a fixed location so that Harris doesn’t have to manage moving through the forest and looking for deer at the same time.

When a legal deer is spotted, Harris, who usually shoots standing, concentrates on finding it and getting it in his sights, while King, with the wider field of view, will make sure the shot is safe. In shotgun-only Massachusetts, Harris will shoot a 12 gauge Browning, while in Vermont he favors a Sig Sauer 202 Supreme in .270.

During daylight his night blindness doesn’t come into play, and with his excellent remaining vision, Harris doesn’t need any special accommodation in terms of equipment.  And he does manage to bag his fair share of deer!

Harris has a collection of handguns, but his recently acquired Smith & Wesson M&P in 9mm (the full-size model) is his preferred defense gun. At his current lean 170 pounds, he has no trouble concealing the pistol using a FIST K-1 holster and a Wilderness Tactical Frequent Flyer belt. He’s a good shot, too. At a range session recently, the first time he’d had an opportunity to shoot a handgun in almost a year, he was easily banging out hand-sized groups at 5 yards with the brand-new gun. (Right after acquiring the M&P, Harris had sent the pistol to Karl Sokol at Chestnut Mountain Sports for a trigger smoothing and overtravel reduction, and that probably contributed to the results, too.) 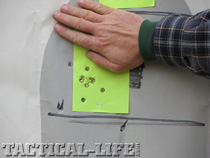 With his 20/30 vision, Harris has no trouble using the standard sights on the M&P, and for range shooting, there’s really no accessory that he feels is completely necessary. However, in a home defense situation, with the most likely scenario happening in low light, and with his night blindness, Harris says that a laser would be a huge asset.

He tried out my own Crimson Trace-equipped M&P and believes that it would make all the difference in the world to him if anything happens to him after sunset.

Final Notes
Self-defense is a natural right, and enjoying the great outdoors is our heritage.  They belong to one and all. While having a handicap will certainly limit your ability to do both, it doesn’t have to eliminate it. With desire, ambition and equipment, there’s a way!

Next time you go to the range, jump out of your car and prepare…