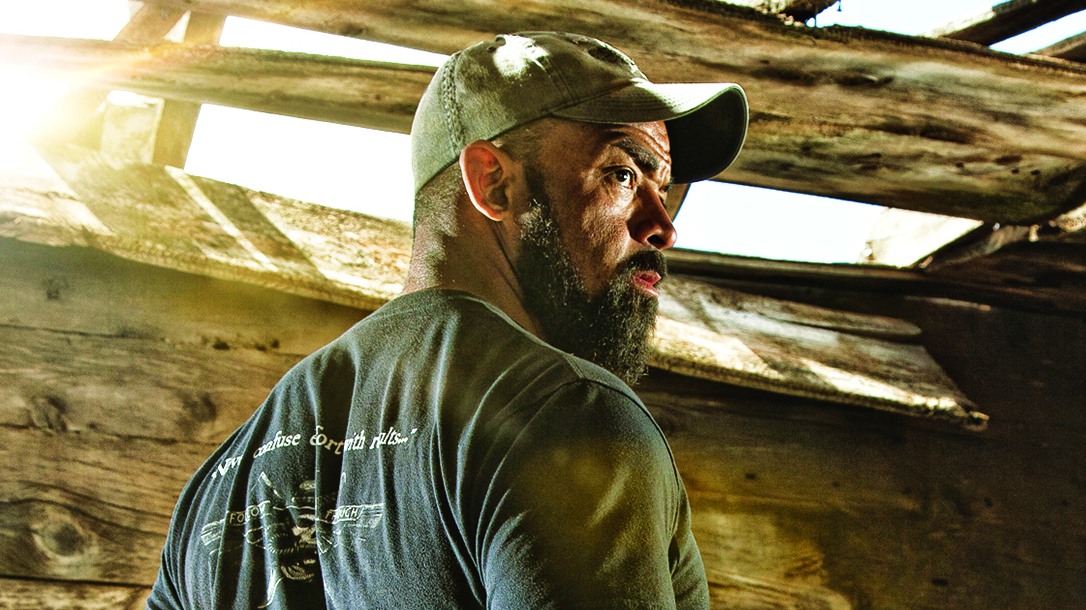 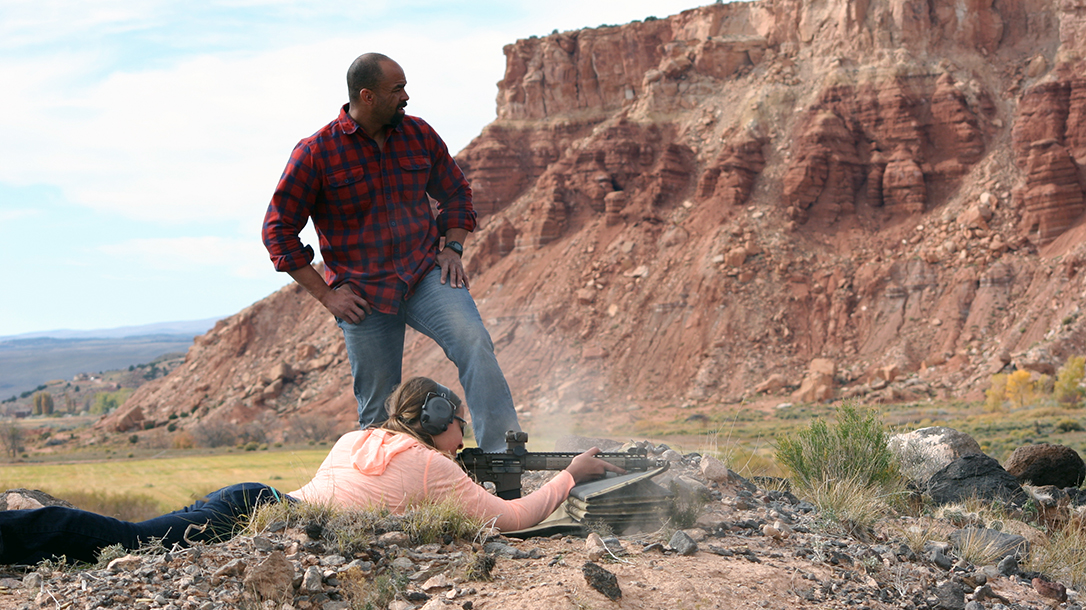 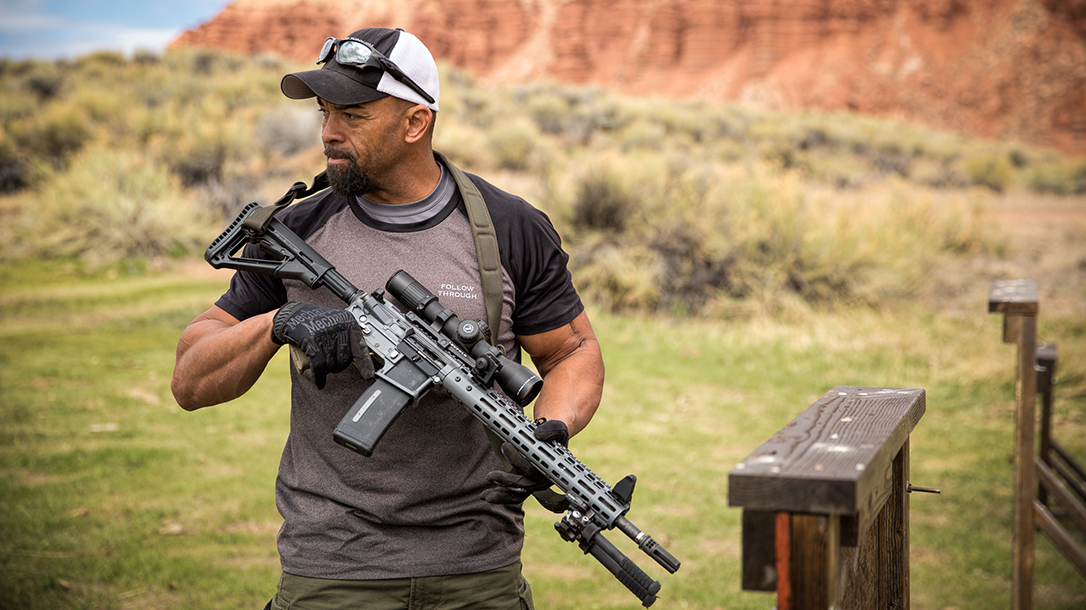 3 of 3
Buck Doyle on the range 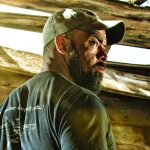 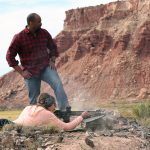 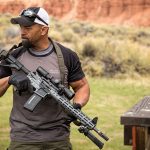 During the past 10 years, I’ve traveled the country attending various training courses involving every firearm you might field on duty or in a self-defense role (and a few you wouldn’t). The instructors included combat veterans, longtime officers, world-class competitors and a few folks working with some of the most elite foreign military and anti-terrorist units. I’ve attended major academies and local training entities alike. So I’ve developed a broad understanding of what is taught and who teaches it. This gives me some healthy skepticism, especially because you can’t walk a block without tripping over a dozen “expert instructors” these days.

But Buck Doyle of Follow Through Consulting is different. It’d be hard to find someone with more “been there, done that” experience, and he lives what he teaches—techniques he used in combat and taught to those fighting abroad today. I’ve seen him do so with military and police units who will only train with him. He teaches the same concepts to his family on the range and during a hunt. He even serves as an adviser on movie sets. But he never compromises. He knows his teachings save lives.

Buck retired from the U.S. Marine Corps after 21 years as a master sergeant. He spent 17 with special operations units. Doyle served as a team leader, platoon sergeant and chief instructor at the Special Missions Training Branch as a reconnaissance Marine attached to 1st Force Recon, 1st Recon Battalion and MARSOC. He served in Asia, Africa and the Middle East and earned multiple awards, including the Bronze Star.

Buck founded Follow Through Consulting in 2010 and spent four years contracting with the Department of Defense to assist combat units in Afghanistan. In 2014, his classes became open to law enforcement and qualified civilians. He continues to teach military units on site and at his unique training facility in Teasdale, Utah. Corporations also consult with him for team building, leadership and product designs.

Word spread quickly about his expertise and how well his system worked for even the least-experienced shooters, and Hollywood came calling. In 2017, he began providing intensive weapons training to the lead cast members of the TV show Shooter, including in-depth training and application at his facility in Utah. He also traveled to the set, providing technical and practical expertise. His latest project included technical advice for Dwayne “The Rock” Johnson for the movie Skyscraper.

Buck is also one of nine U.S. service members featured in Mark Lee Greenblatt’s book Valor: Unsung Heroes of Iraq, Afghanistan and the Home Front. He was even the subject of the Outdoor Channel’s Fight to Survive, detailing his efforts to save a fallen brother during an Iraqi sniper attack in Anbar Province.

I’ve trained with and assisted Buck during numerous classes. You learn to cut to the chase without wasting time, motion or energy. Basically, you talk less, shoot more and work harder. He is fiercely dedicated to teaching what works in the field using what you have, without regard to what’s popular. For his Scoped Carbine courses, for example, you learn the basics of ranging and hitting targets with a 5.56mm carbine. Observe, adjust, fire, repeat. It’s that simple, and I have new students hitting 12-inch steel targets at 600 meters in some serious wind by the end of the first day and repeatedly by the end of class. It’s about application, not theory, and it works. Attend his square-range training and you get the same thing: simple, straightforward methods he has used and seen work in combat.

Buck applies this to his personal life. No man I know trains harder physically, mentally and emotionally. Every day is a training day. He expects nothing from those he teaches that he doesn’t do daily. Seeing him run recon Marines into the dust 10 years his junior is impressive. He also hunts when he has time and uses the same principles and equipment. When he trains clients for trophy hunts, his methods don’t change. Using a bolt gun or semi-auto? It doesn’t matter, and the critter on the other end won’t know the difference.

Buck will teach you to understand your rifle and ammo, prove them in the field using a Kestrel and go to work. The more you do it, the better you get. This might not be as sexy, nor does it make for big social media hits, but it works. I used Buck’s methods every time I test a rifle and hit targets at the very limits of a bullet’s capabilities. Now if I could just get back those countless hours languishing in classrooms studying MOA while bored off my ass.

Buck is a dedicated family man who passes these skills on to his wife and two daughters. It’s just as common to see Buck post a picture of him practicing with his family on Instagram than anything work related. Even so, his family regularly works the range during down time. Family friends own his Utah facility, and the entire operation is family oriented. And it’s not just practice and target shooting at the range; he’s helped friends and family take game using his techniques.

Also, while many in this profession are quick to tout the virtues of whatever company gives them stuff, Buck is different. He refuses to buy into that. He will test a product and provide serious criticism. He’ll use the gun, for example, when he teaches and trains and tell you what it does. If it’s great, so be it. If not, he’ll tell you. It’s probably a bad business tactic to some, but Buck does not care. Want him to test it, send it to him. If it’s crap, he’ll send it back. If he tells you something works, it’s because it does after sending thousands of rounds downrange in the harshest conditions Utah can present.

The Modern Outfitters MC7 rifle in .260 Remington that I’ve been using is a perfect example. After Buck put several thousand rounds through it over a few weeks, he told me I needed to shoot it. Always a skeptic, I said sure. Well, he was right. The gun is everything it’s cracked up to be, and I have yet to try anything he has tested and have it not be exactly what he said it was.

Buck does not endorse things. He uses them. If you see him using something all the time, it’s because it works, period. There are no advertisers on his page, nor does he have a shirt plastered with them. Again, that’s rare in this business.

What’s Old is New, and Some Final Thoughts

What Buck teaches is not new. He’ll tell you that. It seems to be revolutionary to some of the old guard, especially in the military and law enforcement world, but he makes no claims to be some guru. It might be what I like most about him. He is all about the application. Does it work? Is it simple? Can I teach my daughter to do it, and can a relatively new user pick it up and practice it at home? Can it be applied across a spectrum of weapons?

Every day I shoot beyond CQB distances, I use the same system that Buck has perfected. I’ve done so in several calibers out to 1,300 yards for years, and it works. I dial my scope less each time I run a rifle. Even using a red-dot sight at closer ranges, the same principles apply. Buck will flat-out tell you that his methods are not new, improved or revolutionary. Honestly, not much out there in the training world really is. But his training works and works well.

Like the rest of society, the firearms industry has become celebrity driven. There is just no way around it. It’s what consumers seem to want these days. You can lament it until you’re blue in the face, but it’s here. And big names can be a good thing, as they can take this industry to new heights. Buck is a rising star, and yet he’s never lost sight of his family, faith and roots. Nor will he compromise his values for money or fame. He is the personification of pragmatism—using what works and living it. Let’s hope we get more people like Buck. Who knows, maybe it will catch on.

For more information on Follow Through Consulting, visit followthroughconsulting.com. 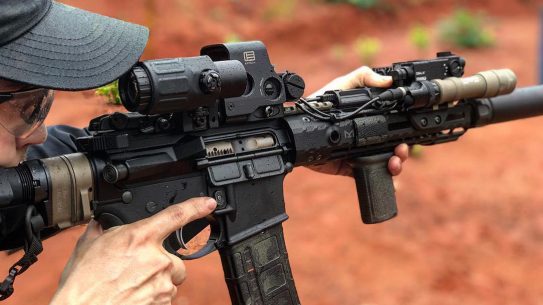