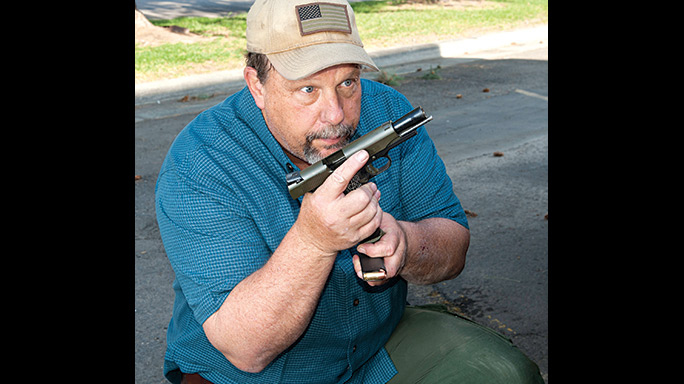 1 of 6
Gunfighting: How to Properly Reload Under Fire
“The real difference here is the mode of thought. Gunfights are never the same, and they’re seldom as practiced on the square range.” 2 of 6
Gunfighting: How to Properly Reload Under Fire
You can rack your pistol’s slide one-handed by hooking the rear sight on a vehicle tire. 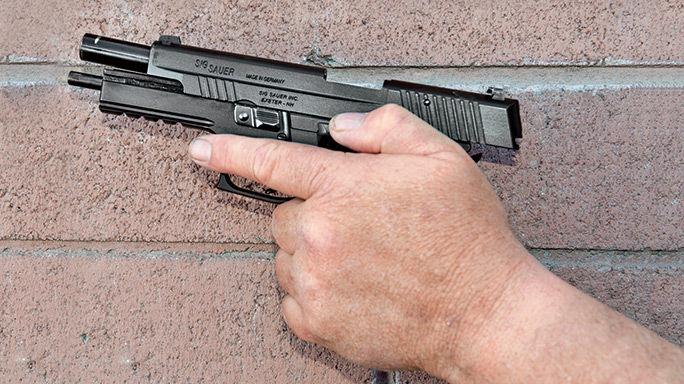 3 of 6
Gunfighting: How to Properly Reload Under Fire
It’s important to be able to operate your pistol’s controls with either hand. 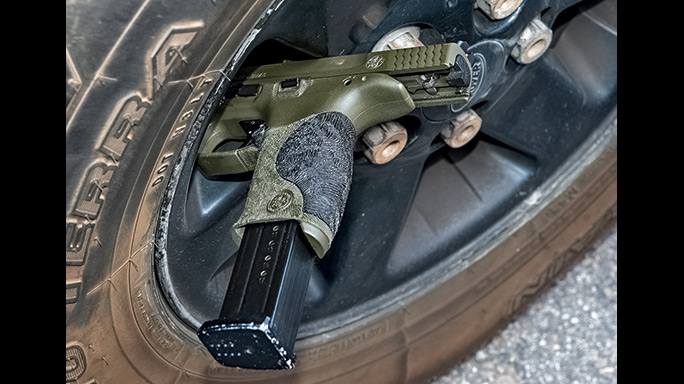 4 of 6
Gunfighting: How to Properly Reload Under Fire
If you’re using a car as cover, a wheel can help support your gun while you reload. 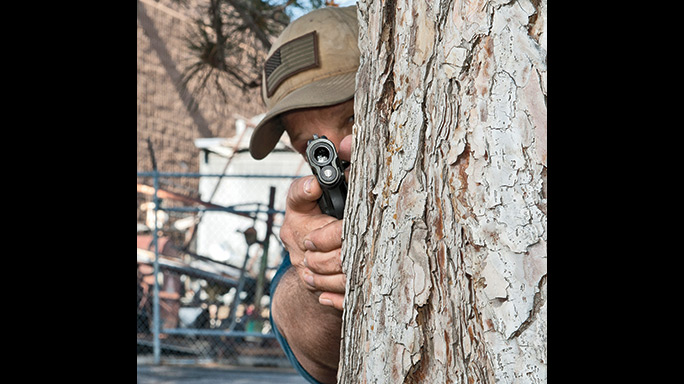 5 of 6
Gunfighting: How to Properly Reload Under Fire
To survive in a gunfight, get to cover and expose as little of yourself as possible when firing back. 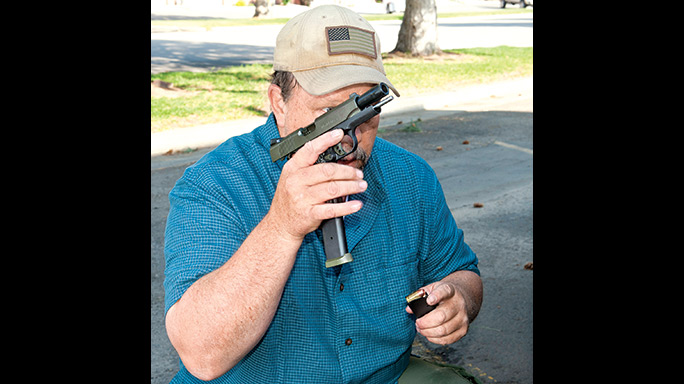 6 of 6
Gunfighting: How to Properly Reload Under Fire
Bring your pistol up into your “workspace” to reload while you keep your eyes on the threat. 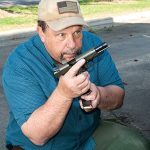 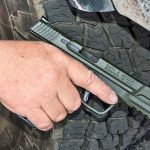 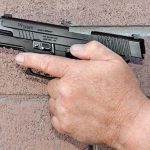 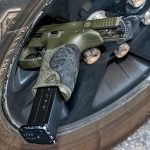 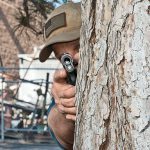 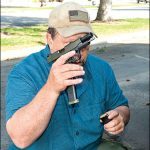 Too often, people train for a shooting while ignoring the realities of a gunfight.

But the difference is pretty simple. While shootings may involve more than one gun, they are always one-way fights. They are up close and personal and typically low round-count affairs that are quickly over with no prolonged interaction. On the other hand, in gunfights, the bullets are flying both directions—and that changes things a ton! All of the sudden that square range—which offered plenty of time, yardage markers, pristine footing and no need to move—is just about worthless.

Few people in the real world “stand and deliver” when rounds are zinging by their heads, feet or any other body part: They seek cover and fight back, and that requires a whole other mindset.

Generally, gunfights are dynamic. You are moving, they are moving, rounds may be impacting around you, and all that practice standing on the line has gone out the window. You may get hit—an unnerving but real risk—and whether by bullets, debris or shrapnel, that changes things. The most likely recipient of these projectiles is your hands. Most people focus on the gun, and it is very often the thing first hit—anyone doing any force-on-force training will attest to this. Is it lethal? Maybe not, but it sure wreaks havoc on your two-handed grip, your perfect aim and your ability to perform speed reloads under a second!

In gunfights, the first critical difference is the addition of movement. Today, no reputable school I am aware of advocates standing still in a gunfight. (If some do, my guess is that the instructors have never actually been in one.) You are going to learn the basics standing still, but after that you should be on the move. It may involve moving as you draw, after you fire, while firing, you name it, but at some point you had better be moving. Whether it’s to avoid getting killed, to find cover or because you’re scared to death, you are going to move. In a perfect world or on the competition range, you will never have to reload on the move: You will conserve ammunition, hit everything you aim at and get to cover to make the perfect tactical reload in preparation of the next step. But in the law enforcement world, you must practice what you do on the move, including reloads.

We’ll start with the empty reload, as this one is pretty simple. When you run out of ammunition, your weapon becomes a very expensive, substandard hammer. So you need to load your gun and get back in the fight as soon as possible. But while you are doing so, you need to stay in the fight, and that means staying focused on the threat. Keep the pistol in your workspace—in front of your face with your head up and your eyes on what is trying to kill you. You can look under or through the triggerguard or have your gun a bit to the side, but turn the weapon up so the reload is natural. Pointing an empty gun at your opponent is, well, pointless, especially if it slows you down. And if the gun is at your waist, you will be slower and lose track of where your threat is. Stay threat-focused and get your gun back in the fight—it is your best chance for survival at this point—as fast as you can, although getting shot at will probably make this a self-correcting event.

Next is the “tactical reload.” It goes by several names and basically involves loading your already loaded gun. You are simply topping it off with a fresh magazine. Of course, you need to know how to do this. However, it should not be something you do while you are fighting. These reloads are for the lull in the fight, or for right after the fight, just prior to putting the gun back in the holster. While shooting at the guy trying to kill you, simply keep returning fire until you run out of ammunition, then reload and repeat as needed.

Both of these reloads need to be practiced from every conceivable position, including prone, standing, kneeling, on your side, around a tire, under your car and around a barricade. You need to be accomplished at these because, unless you get in this fight on the range, you will need to shoot from what your environment presents. This practice can be done dry, and it’s a good way to work out where your equipment should be placed.

Many if not most gunfight injuries are to the hands: Our eyes are drawn there, and most good stances place the pistol at center mass. Therefore, you may not have both hands to use shortly after the fight begins, so practicing shooting and reloading with one hand is critical. There are all kinds of ways to do this, a few of which are pretty common among trainers.

The most popular one-handed reload is to use your knees to hold the weapon while you access your magazine. This can be done while standing, sitting or even kneeling. With a bit of effort, it keeps the muzzle pointed in the correct direction. Place the weapon between your knees, reload as needed and get it back in the fight. The nice part is that this method facilitates the use of either hand. If the slide is locked back, it can be placed into battery using the slide release. If not, running the slide may entail the use of a tire or even a crack in the wall. This is the very reason ledge sights are so common today.

Another one-handed reload seen with some frequency is the use of the lower leg while in a kneeling position. This generally accomplishes the same thing, and for those with large legs like me, it’s actually easier. This technique is a single-sided event, so practice on both sides. You can also place the weapon under your injured arm, especially if yours is only a hand injury. You can also use a waistband, your holster, a pocket or other parts of your clothing—just take the time to work it out.

The remaining methods are completely up to your imagination. You need to use what is at hand. Cars and SUVs are common forms of cover: The wheels present all kinds of options, so walk around your vehicle and see what will securely hold your weapon. This may be critical, especially if you took a round to the leg. You would be surprised what you can do with a bit of thought. Just make certain you try all of these methods dry until you can do so safely.

The real difference here is the mode of thought. Gunfights are never the same, and they’re seldom as practiced on the square range. It is too easy to train for the best-case scenario; train for the worst, and count your blessings when all goes well. Only a fool thinks they brought the only gun to the fight. Plan and train for the fight, not the event. The more you know, the better prepared you will be when reality creeps in. Is luck part of it? Sure. But fortune favors the prepared, and the better trained you are, the more fortunate you’ll seem to be! Select AR-15 models from Stag Arms are now available with a Cerakote finish in...