by Massad Ayoob
in Tactics & Training
0

Some of the older cops reading this, and retired ones, can remember when security holsters were the “newfangled thing,” and duty handguns were commonly carried with simple thumb-break safety straps or Jordan-style Border Patrol holsters, the latter sometimes even worn without the strap in place over the hammer. Things have changed. Today, the snatch-resistant holster is the rule more than the exception for uniform wear, and most manufacturers can cite multiple cases where their products saved cops from death at the hands of criminals or lunatics attempting to snatch their firearms.

Over the last four decades, the toll of cops killed with their own guns has trended downward. The excellent security holsters have had a lot to do with that, but they are not solely responsible. Let’s look at other strategies that have helped cops survive potentially homicidal attacks of this type.

Countering Gun Grabs
Before the fourth quarter of the 20th century, all cops were taught about defeating disarming attempts was “Do anything and everything to keep him from getting your gun!” It was Jim Lindell, then head of defensive tactics training at the Kansas City, Missouri, Regional Police Training Center, who figured out in the mid-1970s, “If you try to do ‘anything and everything,’ you end up doing nothing effective!” Jim created the first structured program of counter-disarming tactics, and coined the term “handgun retention” with the system now known as the Lindell Method and the Kansas City Method. 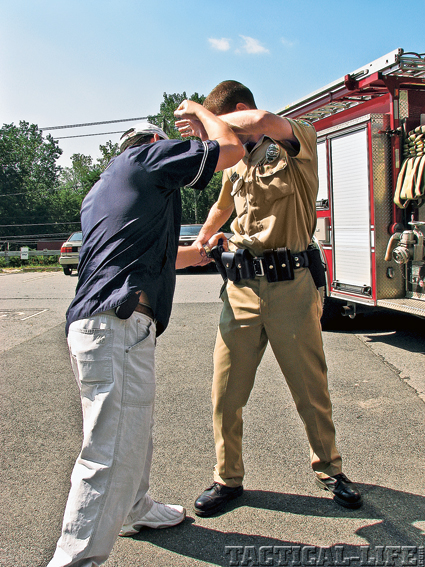