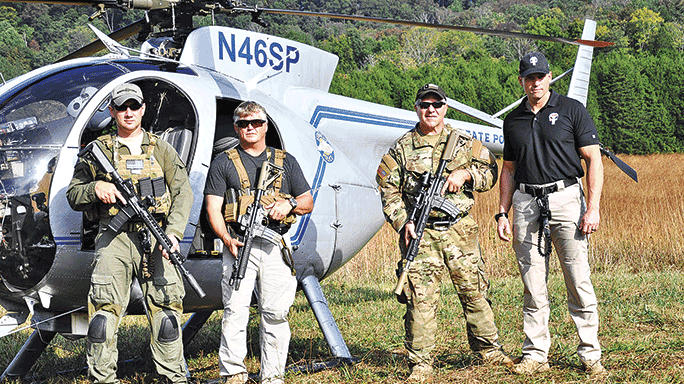 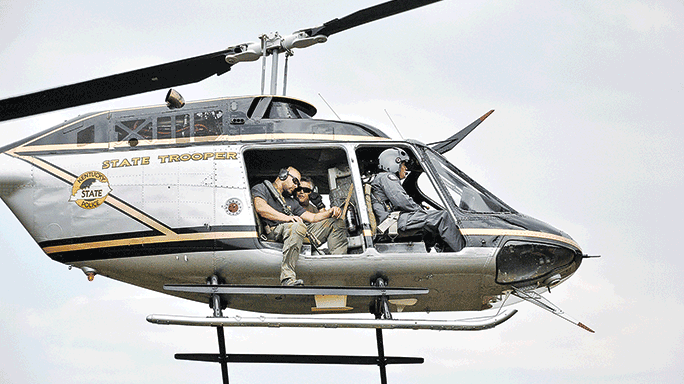 2 of 5
HARM Up: Greg Coker’s Helicopter Aerial Rifle Marksmanship Program
An instructor flew with every shooter and acted as a coach and safety officer during the HARM course. Here a shooter receives feedback after a run. 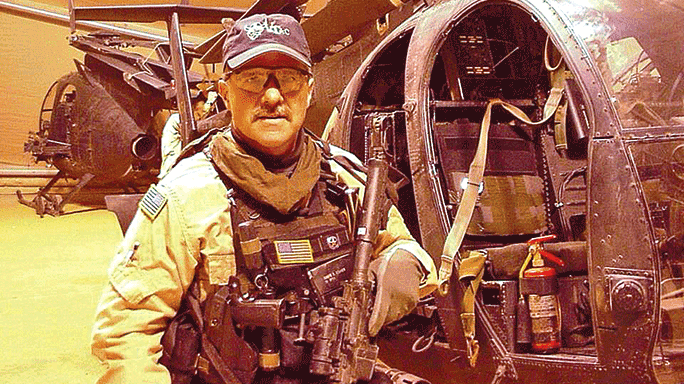 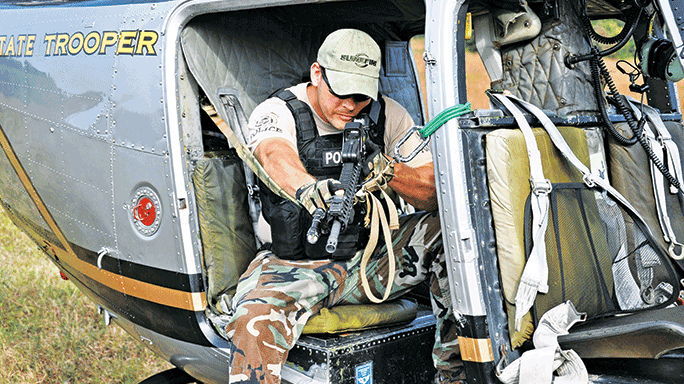 4 of 5
HARM Up: Greg Coker’s Helicopter Aerial Rifle Marksmanship Program
Coker used a VTAC sling as a field-expedient support for rifles in the course, and a bungee cord helped reduce the helicopter’s vibrations. 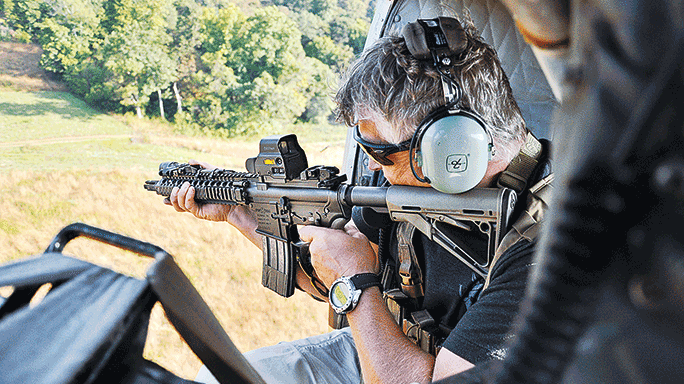 5 of 5
HARM Up: Greg Coker’s Helicopter Aerial Rifle Marksmanship Program
Don Alexander served as one of the instructors. Here he is making a 50-knot run from the OH-58 using a Daniel Defense MK18 and an EOTech sight. 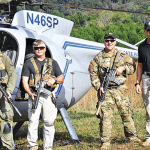 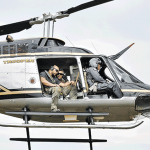 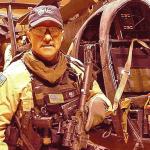 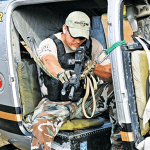 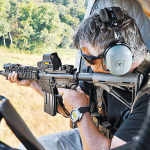 For many years, the concept of using a helicopter as a gun platform was reserved for military special operations and certain anti-terrorism units. Thanks to Greg Coker, these tactics and techniques are now available to local and state law enforcement agencies. Coker spent over 20 years in the U.S. Army, with 15 of those as an AH-6 Little Bird pilot and an instructor pilot with the 160th Special Operations Aviation Regiment (SOAR). Coker was not only an exceptionally gifted pilot but also an avid shooter. This combination resulted in Coker developing a Helicopter Aerial Rifle Marksmanship (HARM) programprogram that was validated and is currently in use by the U.S. military and several law enforcement units. Currently, Coker offers all sorts of real-world firearms-related training through his company, Shield 91.

The HARM program consists of classroom and ground instruction as well as live-fire exercises from an aircraft. While the emphasis is on techniques needed to engage a target from a moving aircraft, that is not the only subject. Coker is quick to point out that success is dependent on the coordination between the shooter and the pilot. In fact, the flying skills needed for successful hits are far more difficult to master than the rifle marksmanship skills.

The initial ground phase of the training involves an in-depth briefing on flight profiles, safety procedures and the physics and ballistics of shooting from a moving aircraft, aircraft rigging and weapon configurations. Shooting at a stationary target from a moving platform, whether it is a boat, vehicle or aircraft, requires the shooter to aim behind the target. Instead of leading the target, the shooter “lags” the target. Coker presents this concept in a very clear and concise manner via a slide presentation. From experience and technical research, Coker provides students with a proprietary ballistic chart that gives the shooter the proper lag based on airspeed and distance.

A critical portion of the training involves the aircrew. Coker’s 5,000-plus hours of flight time with the 160th SOAR and his easy-going personality give him instant credibility with law enforcement aviators. For the shooter to be successful, the flight parameters fit within a specific profile. If the airspeed or distance is not what is called for, the shooter cannot be successful. Mission profiles start with a ground speed of 40 knots, an altitude of 100 feet and a range of 100 yards. Depending on the length of the course and range capabilities, profiles are increased to 60 knots with a range of up to 300 yards.

Rigging the aircraft for the shooter involves both safety tethers and the use of a supporting sling. This can be as simple as attaching a D-ring to the shooter’s safety belt or may involve the use of harnesses. The tether points are dependent on the model and configuration or the aircraft. Surplus aircraft, such as an OH-58 and OH-6, have hard points built in to the floor of the aircraft. If commercial aircraft are used, seatbelt mounting brackets or other hard points need to be identified prior to a mission. Coker prefers to have the shooter sit on the right side of the aircraft, directly behind the pilot. This enables the pilot and shooter to have the same line of sight on a potential target, and it helps with communications.

This course is designed around an M4-type weapon system. Coker’s optic of choice is a quality non-magnified red dot to allow the shooter to track and index the target with both eyes open. In addition, this type of optic enables the shooter to adjust for environmental conditions and lighting. A sling is also mandatory, as a loose rifle could result in a catastrophic failure of the aircraft.

Coker emphasizes that regardless of the environment, basic marksmanship fundamentals are critical. A proper sight picture, trigger control and a proper position are necessary to be successful. Only semi-automatic fire is used in the HARM course. As Coker puts it, “We are responsible for every bullet we launch downrange!” The fact that the shooter is in an aircraft does not negate the legal responsibilities surrounding the use of deadly force.

I recently had an opportunity to attend a HARM class that was held at the Rock Castle Shooting Center at Park Mammoth in Park City, Kentucky. The Rock Castle Shooting Center is made up of 2,000 acres of Kentucky countryside and is the site of the Mammoth Cave Sniper Competition and world-class 3-Gun matches. The Kentucky State Police (KSP) Special Operations Branch, who contracted with Craft International to provide the training, hosted the event. Craft International reached out to Coker, and his company, Shield 91, to provide the instruction. The assistant instructors were Don Alexander, a retired Special Forces warrant officer, Tony Ely, a retired 160th aviator and competitive shooter, and Mark Lang, who is a Texas SWAT officer and an adjunct instructor for Craft International.

The KSP Special Operations Branch includes the agency’s aviation unit and the Special Response Team (SRT), a full-time team that has extensive experience working with the agency’s aviation unit. Their complete SRT unit attended the training along with officers from other Kentucky agencies, Florida and Indiana. The KSP team utilized their issued HK416 rifles equipped with Aimpoint optics, SureFire lights and PEQ laser units. The rest of the class used a variety of M4-type carbines with the exception of two officers, who ran LaRue Tactical OBRs in 7.62mm NATO. A few officers ran SureFire sound suppressors, which eased the muzzle blast for both the shooter and the pilot.

Given the large range at Rock Castle, we were able to use eight steel targets spaced between 75 and 100 yards apart. The initial training involves engaging targets using a barrel that is placed at a specific distance from the target. The barrel is used as an aiming point until students become accustomed to establishing the proper lag and follow-through. The dope charts provided by Coker were spot on, and all of the shooters achieved hits during the first evolution. Shooters quickly learned to track targets early, keep the rifle moving and use a proper sight picture.

Coker suggested that students spend time getting measurements off real-world items to assist in judging lags during an actual deployment. Examples include the length of an F-150 truck or police vehicle and the width of a traffic lane. It is important to note that aerial gunnery is not the same as a precision marksmanship or sniping. While the hit ratio varied between shooters, I estimated that by the end of the class 80 percent or so of the shots struck within a few feet of the target. To quote Coker, aerial gunnery skills are “just another tool in the toolbox.” It is certainly not a tactic that is appropriate when the threat is located in a crowd of people. However, it is applicable to a threat that may be isolated or in an open space.

Aerial gunnery also offers an immediate response to a hostile sniper that is in an elevated position. This was the case in 1966 when Charles Whitman climbed to the top of the Texas Bell Tower on the University of Texas campus in Austin. Armed with three rifles, two pistols and a sawed-off shotgun, the ex-Marine went on a shooting spree that killed 14 people and injured another 32. It took law enforcement 90 minutes to gain access to the top of the tower and neutralize Whitman. 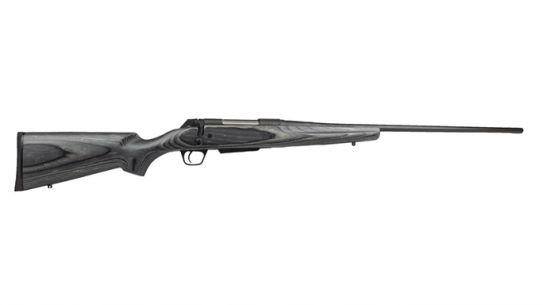