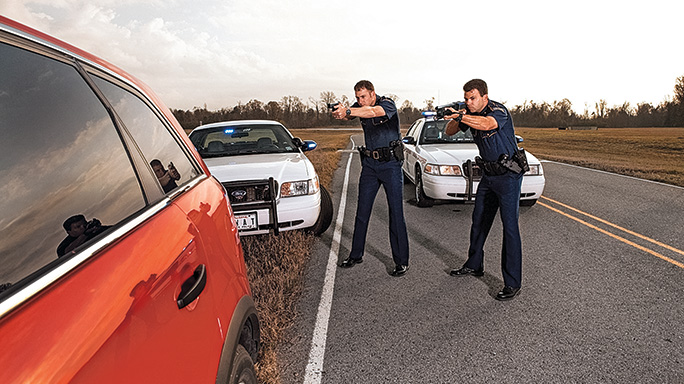 1 of 3
Helpful Driving Tactics For Law Enforcement
Traffic stops are inherently dangerous, but more officers die from collisions on the way to and from a callout. EVOC training is one way to help more LEOs survive. 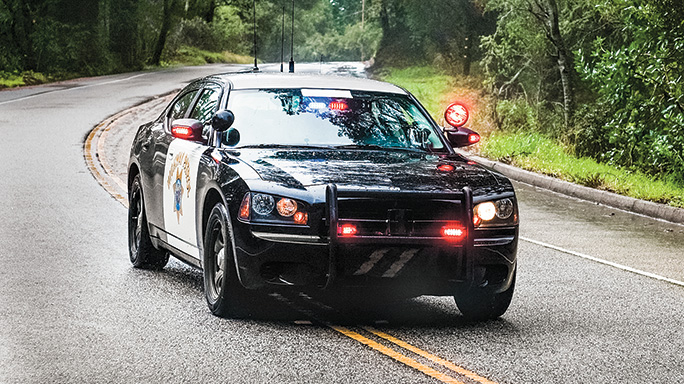 2 of 3
Helpful Driving Tactics For Law Enforcement
“ … for 15 out of the last 17 years, traffic-related incidents have been the number one cause of law enforcement line-of-duty deaths in the U.S. ” 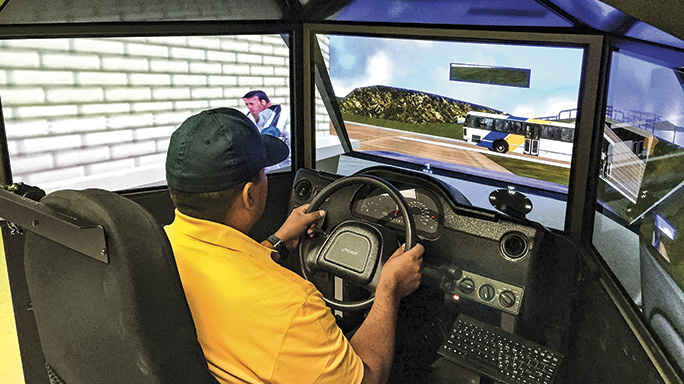 3 of 3
Helpful Driving Tactics For Law Enforcement
Driving simulators can help trainees learn to avoid hazards and pay attention to their surroundings before real deployments. 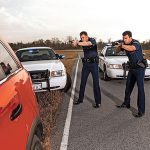 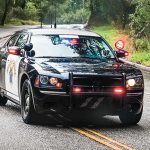 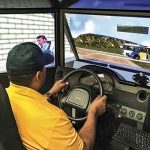 Police work is dangerous. We in the profession already know this fact. The general public has some idea, too, but much of the information is gained watching TV shows or movies. These are not always the most realistic examples of policing. While “Joe and Jane Citizen” realize that going to someone’s house for the domestic dispute, responding to the radio call for a holdup in progress, or the lone officer with a car stop at 3 a.m. are all potentially lethal encounters for the police, they are usually not thinking about auto accidents. Surprisingly, many cops are also of the same mindset. Enter the mission of Emergency Vehicle Operations Course (EVOC) instruction.

I have been teaching the last five years at a police academy, providing EVOC training to new recruits as well as veteran in-service police officers. It is an assignment I treat very seriously because lives are at stake and I am a big proponent of “safety first” being a mantra for our officers. What also comes as a revelation to many of the cops in our classes is the fact that for 15 out of the last 17 years, traffic-related incidents have been the number one cause of law enforcement line-of-duty deaths in the U.S.

Regarding these traffic fatalities in police operations, I was schooled of the dangers as a young rookie with just a couple weeks on the street. It was 20 years ago now when a young Philadelphia police officer, Kevin Williams, along with his partner, answered a 911 call for gunshots on the highway. They were using an emergency patrol wagon, and Kevin was the passenger when the wagon collided with another vehicle in an intersection and tipped over. His partner was badly injured, yet sadly, Kevin was partially ejected and pinned under the wagon. He gave the ultimate sacrifice that day.

In addition to that, it is regrettable to report that I have lost several friends and co-workers over the years due to both on- and off-duty auto accidents. It is for all these reasons that my fellow EVOC instructors and I find the material we teach paramount, as we attempt to drive the message home to our course attendees to be careful behind the wheel. Our students receive on-street evaluations, time driving on the orange-coned EVOC course in various maneuvers, vehicle pursuit and hazard avoidance scenarios conducted in our sit-in, video-game-style driving simulators, as well as classroom instruction. I would like to share with you some of the tactics, techniques and statistics we incorporate in the classroom portion of our training via the following key points.

Seat belts save lives. According to the National Highway Traffic Safety Administration (NHTSA), seat belts reduce serious crash-related injuries and deaths by about 50 percent. Seat belts also help vehicle occupants from becoming a flying projectile or missile inside the car and avoiding ejection. The NHTSA reported that in fatal crashes in 2011, 77 percent of passenger vehicle occupants who were totally ejected from a vehicle were killed. These are some poor odds; no officer should gamble with those numbers.

Another fact many cops find shocking is that severe or fatal injuries can occur if an airbag deploys and the driver or front-seat passenger is not wearing their seat belt. The airbag is designed to work in conjunction with seat-belted occupants and could actually cause your death if you’re not wearing them.

In class, I am the first to confess how foolish I used to be early in my career working patrol because I rarely wore my seat belt. This is still an issue with many officers in numerous departments across the nation. A lot of cops don’t like wearing seat belts. They are concerned about getting to their sidearm and exiting the vehicle quickly if there is a threat. While that is a valid concern, to counter it we talk about releasing the seat belt upon the approach to that “man with a gun” call, before they turn onto the street or a block away from the target location. We produced a training video of one tactic of the driver, with their right hand on the wheel and with their left hand going under, pulling the shoulder strap away from their chest and sliding down to the buckle connection for an easy release, all while still controlling the steering. With practice, this method makes for a smooth operation and is easy to perform.

Drivers need to keep their hands at 9 and 3 o’clock on a steering wheel. This is something new for old-timers, myself included, because in my recruit training, the rule was a 10 o’clock and 2 o’clock hand placement. Now we are advising sliding the hands down slightly from the old “10 and 2” to “9 and 3.” This will lessen the chance of the airbag deploying—at a fast rate of approximately 200 mph—and the driver’s hands and forearms being caught between the airbag and their body. This could cause all sorts of serious problems, like a broken nose or other severe injuries to the face and eyes, or even finger or hand amputation.

The “9 and 3” also improves stability by lowering the body’s center of gravity to reduce unintended and excessive steering wheel movement. Being a realist, I understand the fatigue that is caused with both hands constantly on the wheel, which is not practical to maintain for an officer’s eight- or 12-hour tour of duty. We suggest in these instances at least one hand at the 9 or 3 at all times, and when the moment comes for a quick maneuver, the resting hand returns to the opposite side of the wheel to control the situation.

Studies show that 90 percent of the decisions you make while driving are based on information you gather with your eyes. Of course, we are paid to be trained observers, always looking for the anomalies on our beat of what doesn’t seem right and suspicious activity of possible crimes occurring. This is good old-fashioned police work, yet in addition to this mission, keeping your vision out on the road in front of your cruiser and simultaneously scanning the area is challenging to say the least. We teach the “two-second” rule: If your eyes are off the road for any longer than two seconds, bad things can happen—like a child running out onto the street from behind a parked car or a bicyclist turning into your lane. A recent study from Oregon State University looked at driver distractions and concluded that anything which takes your attention away from the road for just two seconds can increase the risk of an accident up to 24 times.

When responding in emergency mode, keep your lights and sirens on continuously unless you are close to the destination and require stealth, and when you’re approaching intersections with the steady siren, be sure to change up your wail to a yelp, or phaser mode, hit the air horn various times, etc. This will help other drivers hear you and also will distinguish your siren from any other approaching police vehicle sirens. Be extra vigilant at intersections, as this is where the majority of auto collisions occur.

Another common accident for officers is while driving in reverse. Take your time backing up, checking your interior and side-view mirrors, then turn around, physically look over your shoulder behind and beside the vehicle before moving. Monitor your speed. Speed is needed when going to the emergency call, but regular patrol should be at a slower pace, thoroughly taking in your area of coverage. If you’re going too quick, you will miss the burglar crawling out of the basement window or not see the woman waving you down to report a robbery. Slower speeds help in adverse weather conditions, lessen the chance of serious injuries if you get involved in an accident, and aid in bringing the patrol car to an abrupt stop if the surprise hazard appears in your lane of travel.

To conclude, I challenge officers to pay more attention on the road and spread the gospel of keeping safe to your brother and sister officers, too.

Let’s honor the memories of our heroes, especially those line-of-duty deaths due to auto accidents that are sometimes given a little less attention by the media and public than a shooting tragedy would receive. I have had the honor of visiting the National Law Enforcement Officers Memorial in Washington, D.C., on several occasions, viewing the names of the over 20,000 fallen police officers who are given tribute there. Many of the names carved in the marble walls of this hallowed place are those who died on the road in traffic incidents. They must not be forgotten. One of the inspiring quotes etched into the memorial fittingly says, “It is not how these officers died that made them heroes, it is how they lived.” 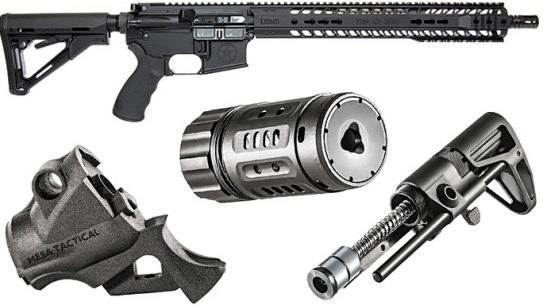 From ammo to a US Marshals Survivors Benefit rifle, there's plenty of noteworthy tactical...