by Robert A. Sadowski
in Tactics & Training
0

Compatibility is Key Compatibility with your spotter/shooting partner is vital. The author takes aim behind a Sako TRG M10 rifle at an NRA Outdoors Long Range Hunting Course with the help of his spotter, L.P. Brezny.

You don’t particularly have to like your spotter/shooting partner when it comes to long distance shooting, but it helps. Typically, there is a mutual respect between the two on a sniper team, and hopefully compatibility. Each has a job, and each should easily be able to flip from spotter to shooter as duties rotate. The shooter/spotter relationship is built on trust and communication. The shooter needs to trust what his or her spotter says, and in turn, the spotter needs to provide the best possible information. Neither wants to let the other down. You share information constantly in a fast, terse manner since some targets may only show themselves briefly. One person can’t do the job alone. It is a team effort, win or lose. Even in non-military situations like shooting with your pals at the range or hunting, the spotter/shooter team can be invaluable for success.

Briefly speaking, the shooter’s responsibilities include spotting a target, estimating target distance, adjusting the optic on the rifle for the shot and engaging the target. The spotter also detects targets and shares range estimation. Communication rapidly goes back and forth between the two, especially in windy situations when conditions can change quickly, and it is up to the spotter to estimate wind direction and speed and give the shooter the green light to engage the target or stop and adjust their aim given new information. After the shooter sends the bullet, the spotter observes the impact and calls it either a hit or miss, and if the target was missed, gives the shooter aiming corrections.

Compatibility with your partner is important, and at a recent NRA Outdoors Level 1 Long Range Hunting course, I was fortunate to click with my partner, L.P. Brezny, the noted author and long-range varmint hunter. Both of us have spent similar trigger time after varmints—though he has shot his weight in bullets many times over—hunting woodchucks and ground squirrels essentially alone. We may have been with other hunters but never really partnered up with one. At the NRA Outdoors course, we were partnered and put in a situation where we were firing a new platform at known and unknown distances. So, in a sense, the playing field was leveled. The course made it easy to understand the general theory of long-range shooting, but the hands-on shooting at known and unknown distances proved how valuable the partnership between a spotter and shooter truly is. 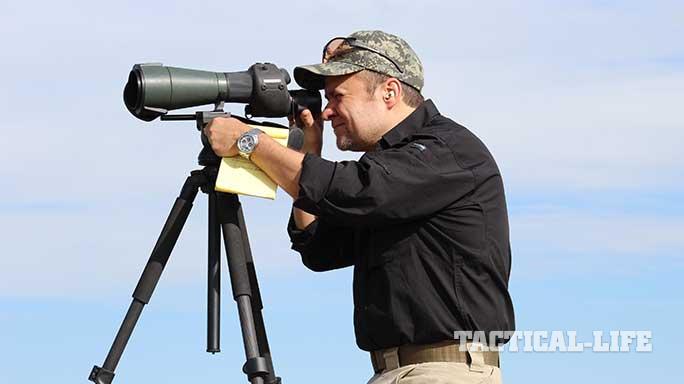 The hardest job is not pressing the trigger to take a shot, but spotting and calling the correct adjustments. If you see your impact as a shooter, you can make adjustments; a spotter’s job is to watch for impacts, and that is easy with a dirt bank behind the target. Learning to spot a trace, or the bullet’s vapor trail in the air as it heads toward the target, takes a bit of effort and good optics. Calling wind takes experience, and the better spotters are really good at it. Brezny called wind change corrections quickly and precisely. One trick is to watch mirage drift, which can help both the shooter and spotter judge wind speeds at the target.

Precise, clear communication between the spotter and shooter is important and should leave no room for interpretation. “A little to the left” can have a hundred different interpretations. The communication between the spotter and shooter sounds a bit formal, and that is for a reason. The typical communication should start with the spotter saying, “Spotter ready,” which means the spotter is on target and ready for the shooter to fire. The shooter then replies, “Shooter ready,” which tells the spotter that the shooter is on target and ready to fire once the spotter gives the command. In this quick moment, the spotter must determine if the conditions are the same, the wind has not changed direction or speed, and the target is at the same distance. If all is good, the spotter replies, “Send it,” and the shooter is given the green light to fire the round. If conditions change, the spotter needs to tell the shooter to abort. The spotter determines the change and feeds the shooter the correction. If the shot is high or low, using “push” and “pull” terms keeps terminology consistent with no room for interpretation. If the shot was low, say 3 mils, the spotters tells the shooter: “Pull 3 mils.” The shooter then knows to “pull up” and dial the elevation turret counterclockwise 3 mils or use the mil dots on the vertical strata of the reticle to correct the shot. “Push” means just the opposite, telling the shooter to dial clockwise to adjust aim. Part of the reason for the terminology is that it allows the shooter to adjust the elevation turret without taking their eye out of the scope and off the reticle. For a wind change direction, “push right” means to push right into the wind.

Hits and misses are all due to communication. Trust your partner’s skills and long distance shooting will soon become much easier.

This article was originally published in the October/November 2016 issue of ‘Guns & Weapons For Law Enforcement’. For information on how to subscribe, please email subscriptions@outdoorgroupmags.com or call 1-800-284-5668.