by Chad Adams
in Tactics & Training
0

0
SHARES
1
VIEWS
Share on FacebookShare on Twitter
On March 31, 2004, four Americans, Blackwater contractors, were ambushed by Iraqi insurgents in Fallujah. The coordinated attack with grenades and machine gun fire left all four dead. The ensuing desecration of their bodies by the insurgents, including beating, setting the bodies ablaze and the hanging of two of the bodies from a Euphrates River bridge, proved to be the spark that ignited a powder-keg of violence in what would ultimately become known as the First Battle of Fallujah.

While most media outlets focused their coverage on the town west of Baghdad, the Blackwater deaths, and the American response mostly via the determined push into Fallujah by U.S. Marines, this was only part of the increased fighting. Just south of Baghdad, in what became known as the “Triangle of Death,” elements of 2nd Battalion, 2nd Marines were also in the mix in the town of Latifiyah.

On April 9, 2004, Marine Corps Staff Sgt. Steve Reichert, a scout sniper with H&S Co., 2/2, and his spotter, Cpl. Winston Tucker, set up in an exposed position atop an abandoned oil tanker in an overwatch mission, covering a Marine patrol. The Marines had been tasked with finding insurgents, while providing security for Arba’een pilgrims moving through the area.

As the patrol moved on the town, Reichert observed an animal carcass lying in the patrol’s path. Using his spotting scope for closer inspection, Reichert saw what appeared to be two wires protruding from the carcass. Knowing insurgent tactics for IED (Improvised Explosive Device) placement, Reichert radioed the patrol to divert. However, the trap was already set.

An RPG (rocket-propelled grenade) was fired, as an insurgent ambush began with heavy small-arms and machine-gun fire. With the platoon pinned down, unable to successfully engage an insurgent machine-gun position, they radioed Riechert for help. The result was a shot that will be forever recorded in the annals of Marine Corps shooting lore. 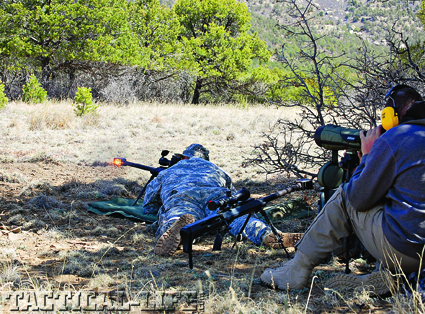 With a borrowed rifle, without a range finder and from an exposed position where he was taking enemy fire, Reichert and his spotter went to work. After two ranging shots, Reichert and Tucker came up with the correct firing solution, and Reichert took out the enemy machine gunner—from an unbelievable 1,614 meters—a mile away.
“Prior to that day I had not shot the SASR for four years,” Reichert said. “Nor was it my rifle. I was very familiar with the round four years earlier, and I could recall some of the data. Lucky for me, the sniper I borrowed it from was very methodical about keeping his data, and shared the gun data with me before I left. I did not know the range was 1,600 meters out, so I put on an adjustment for 1,400 yards and sent a round downrange. My spotter saw the impact and gave me a correction. The second round was close; the third got them.”

Although the machine gun was eliminated, the battle remained. Still on his Barrett, Reichert observed three insurgents moving up a stairwell, where he could determine they were attempting to gain a position in which they could fire upon unsuspecting members of the Marine squad. So Reichert quickly tracked the insurgents, waited for them to stop, then sent rounds through the wall where they hid. In what assuredly was an explosion of bullet and wall fragmentation—all three fell and disappeared from the fight.

“I was using the Mk 211 Raufoss,” Reichert said. “It’s a high-explosive, armor-piercing, incendiary round. I’m not sure how the insurgents felt about being on the receiving end, but I’m sure when they saw the walls being blown apart they thought twice about their trip to see the 70 virgins.”

By the end of the day, the sniper team had spent more than 13 hours in the field in support of the firefight. Throughout the battle, Reichert fired from his exposed position behind some makeshift sandbags and steel plates, engaging multiple targets.

“Having a semi-auto is great in a fight where multiple targets are presenting themselves at the cyclic rate,” Reichert said. Marine Corps commanders praised Reichert’s quick thinking and remarkable accuracy for saving an untold number of Marine lives. And even though the SASR he used wasn’t issued to him, it was a calculated decision that the Marine sniper had the big .50 in the field with him that day.

“I picked the SASR before the mission started,” Reichert said. “I did a map recon of the area of operations, and where I thought an OP (observation post) for the patrols might best be located was 800 yards from the nearest building. This doesn’t give the M40 A3 much room to play with. The Mk 211 Raufoss rounds could penetrate almost any barriers insurgents would hide behind, and the 7.62 would have a hard time going through a wall at that distance.” 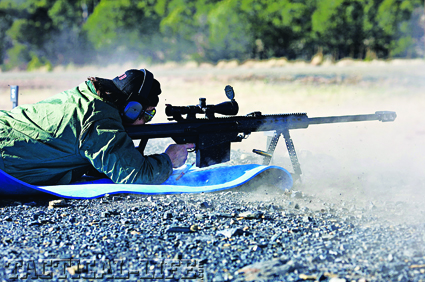 Weeks after the firefight, Reichert was injured when the vehicle he was riding in was struck by an IED. He later was medically discharged from the Marine Corps. But for his actions on that fateful day atop the tanker, he was awarded one of the Marine Corps’ highest honors—the Bronze Star with a combat V for valorous actions.

For a military service that places shoot­­­­­­­­ing above nearly all other skills, with one shot Reichert forever etched his name alongside legendary figures such as Maw­hinney and Hathcock. More importantly, during the course of the fight, he successfully engaged the enemy and saved countless American lives. Ultimately, the day will long be remembered for what a Marine and his Barrett can do.