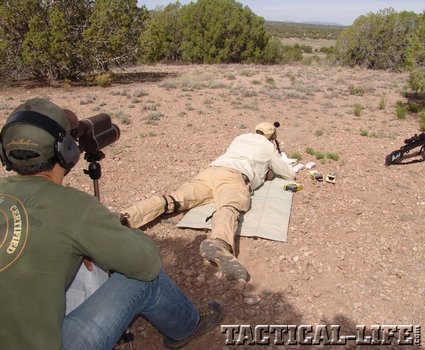 Military long-range precision shooting has been used effectively in combat for much longer than most realize. In one case, a sniper was brought into an area that had been taking serious casualties from an enemy insurgent marksman. Sniper-versus-sniper missions are one of the most dangerous assignments, so the newly positioned sniper first placed a piece of headgear on top of a parapet so that it was exposed to the front. He was rewarded with a through-and-through shot just under the cap where a person’s head would be. The sniper then placed a rod through the hole, sighted along it, and figured out where the insurgent took the shot from. Using his telescopic sight, he located and killed the insurgent shooter with one round. 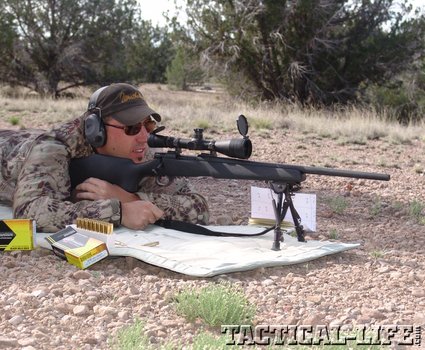 The author’s spotter at Leupold’s three-day course on long-range shooting at Gunsite Academy was equally adept at hitting the steel targets, which were hidden in the high desert Arroyos below us at distances up to 1,000 yards. The spotter made steel ring with his Leupold-topped Weatherby.

Did this take place in Afghanistan or Iraq or even Vietnam? No, that particular engagement occurred on U.S. soil during the Civil War (or the War of Northern Aggression, as my friend Jim Barry likes to quote). Those fundamentals of ballistics, optics, weaponry, windage and elevation have stayed the same as technology has advanced, and today snipers are making shots from distances that were impossible just a few decades ago. What has changed? One of the biggest and most important improvements come from companies like Leupold, who has used feedback from shooters to continually improve its optics. Leupold optics are now the U.S. military’s most used telescopic sights for long-range shooting.

Leupold knows that a “one size fits all” telescopic sight is impractical, results in tactical compromise, and forces misses where only hits count. Leupold now has optics, reticles and magnification all matched to specific calibers, loads and bullets and for every possible application. But fully utilizing a Leupold optic takes superb training, and Leupold has an excellent program that provides just that. 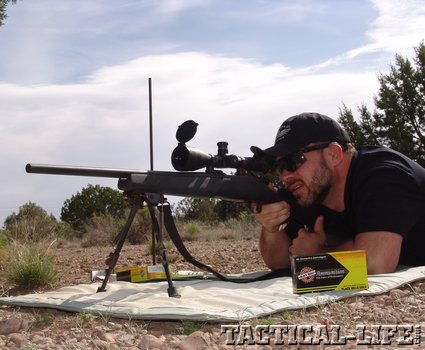 Leupold instructor Tim O’Conner showed us the effectiveness of the Leupold Mark 4 M1 telescopic riflescope with the TMR, mil-dot or duplex reticle.

To experience the usefulness and quality of the Leupold equipment and training, I attended a three-day class on long-range shooting sponsored by Leupold and Weatherby at the incredible Gunsite Academy. Gunsite instructor Walt Wilkinson and rangemaster Mike Moore started with range safety rules and student expectations. Leupold’s instructor, Tim O’Conner, took over as the student shooters selected their firearms for the course, Weatherby .308 Vanguard Series 2 TRR RC (range certified) bolt-action rifles and Leupold riflescopes. I selected the Leupold Mark 4 LR/T 4.5-14x50mm M1 TMR riflescope. O’Connor spent our classroom time teaching us advanced optics and how to properly mount and zero a scope, which we did using Leupold mounts and scope rings.

With rifles slung, the class of gun writers and editors packed into trucks that bounced along the dusty desert roads of Arizona to the Gunsite ranges for two and a half days of trigger time. Using Black Hills 180-grain Nosler Accubonds, we finished day one dialing in our telescopic sights at 100 and 200 yards. The morning of day two, with the basics understood and optics sighted in, the students began to obtain and log DOPE out to 800 yards to prepare for the real challenge that awaited us.

Sniper’s Ridge, the day-two fire mission, had five different firing positions opposite a ridge that was studded with ingenuously camouflaged steel targets. Some were as close as 376 yards, in the dry creek bed separating the hills, while others were as far as 992 yards, all the way up the forward slope. To make things realistic, the targets blended into the sage and juniper—some were almost completely hidden in brush or shadows.

Through teamwork, the spotter and shooter consistently got first-round hits with the .308 rifles. The spotter used a spotting scope matched to the shooter’s telescopic sight, and it was the spotter’s job to locate, range and call out the shooter’s point of aim. The shooter holds where told to, keeps the weapon fed, and tells the spotter if a miss wasn’t held as directed. 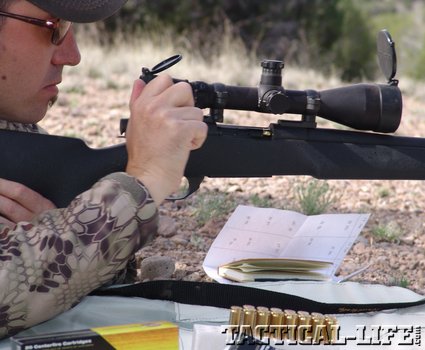 We traded our .308s for a couple of Weatherby Mark V TRR Custom Magnums chambered in .338 Lapua and topped with Leupold Mark 4 ER/T 6.5-20x50mm M5A2 scopes with H58 reticles and Mark 8 3.5-25x56mm M5B2 Illuminated TREMOR2 telescopic sights. The Gunsite instructors spotted for the students on the famous .50 Cal Range, locating, ranging and calling the shots on targets 900 to over 1,300 yards away. The winds were quartering and gusting upwards of 15 to 20 miles per hour, challenging the Black Hills .338 Lapua 300-grain Sierra MatchKing bullets, which ran at 2,800 feet per second. But with Walt and other heavily experienced Gunsite instructors spotting, every shooter was able to get center-of-mass hits on all the targets.

Why is getting hits with the .338 Lapua significant at the 900- to 1,300-yard distances? I discussed the combat effectiveness of the .338 Lapua with British Army Colonel Tim M. (OBE), whose troops used the round in action in Afghanistan. He is proud that a British soldier is now credited with the current long-distance sniper record: three hits at over 1.57 miles with the .338 Lapua round. He recognized that the .338 Lapua is a “favorite for longer ranges because it is a great compromise between weight, penetration and range.” Tim continued, “It really expands your area of interest, the reach of your weapon systems. As an example, an infantry squad whose area of interest is about out to 600 yards would use one to push that out to a much longer distance, to a greater safe-standoff distance, which allows you to outrange your enemy’s capability and [allows] you, not the enemy, to dominate the battlespace.”

The course was both eye-opening and rewarding. Considering the skill level of the students and instructors at the course, I was initially embarrassed to even shoot, but I quickly built up my ability and confidence with the help of the cadre, who were patient and showed great understanding and a thorough knowledge of the material. Even during our debriefs, some students learned that quality optics (riflescopes and spotting scopes) combined with an accurate rifle will produce consistent hits at long range. 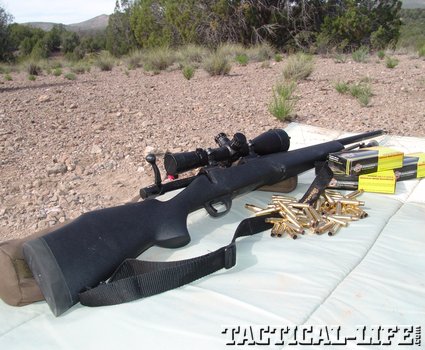 No matter the student’s level of skill or tactical experience, each student (even professional long-distance shooters like LE or SWAT snipers) learned a great deal through this method of instruction and hands-on training. Long-distance shooting is probably the most perishable of all shooting skills. Most shooters think a few trips to the range each year will keep them current or that repetitively punching holes in paper at a few hundred yards will translate to a tactical situation. Practice makes perfect only when you practice perfect. At Gunsite, the practice is perfect and the training is real. For more information, visit gunsite.com or call 928-636-4565. 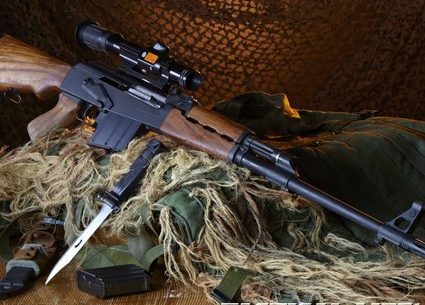