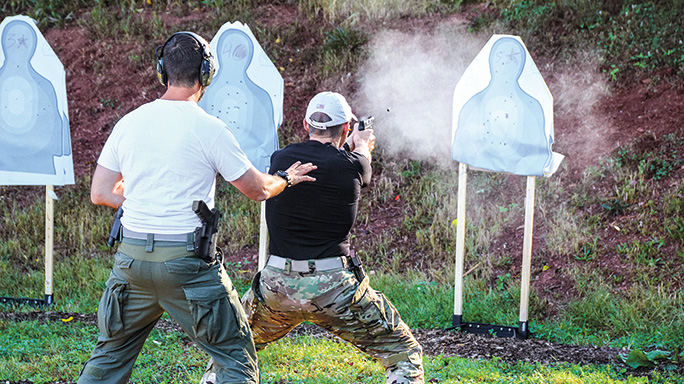 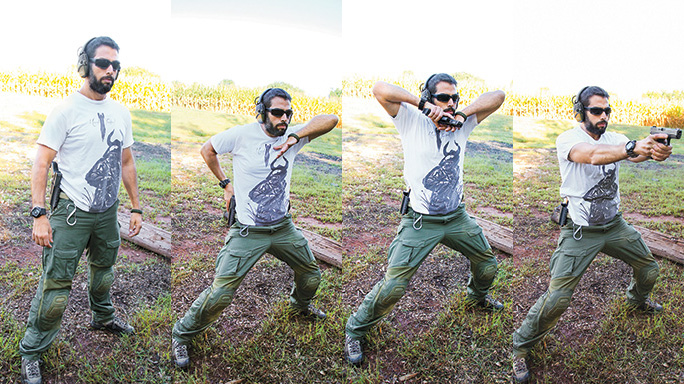 2 of 6
Masada Tactical: Top Training with the Israeli IDF
Lead Instructor Tzviel “BK” Blankchtein demonstrates Israel’s unconventional combat shooting method, which includes achieving a wide and stable stance, bringing the pistol to your face, racking the slide on the draw and fully extending your arms toward the target. Kneeling is emphasized for reloading. 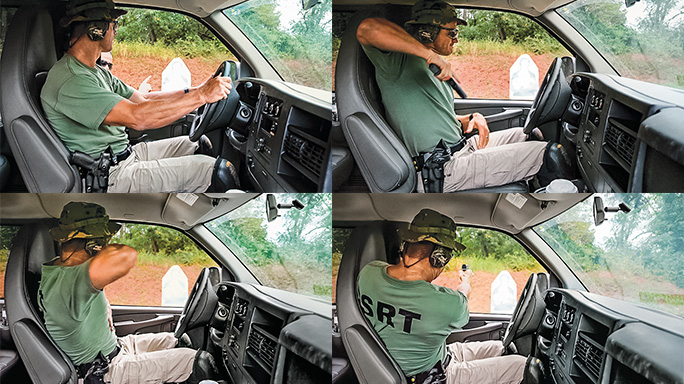 3 of 6
Masada Tactical: Top Training with the Israeli IDF
The Israeli shooting method works particularly well when engaging targets from a vehicle and shooting with only the strong hand. Bringing the pistol up to your face and then thrusting it forward keeps the gun on the target during the entire extension. 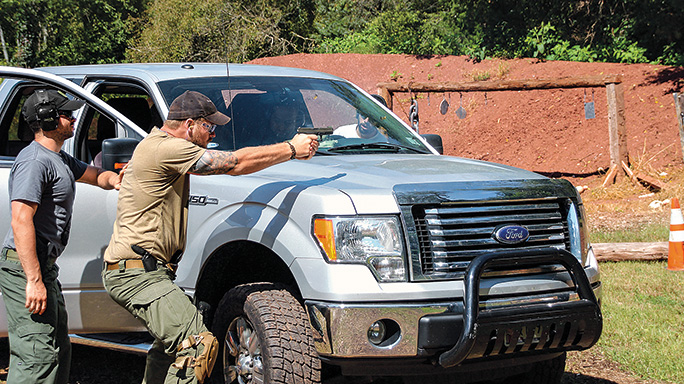 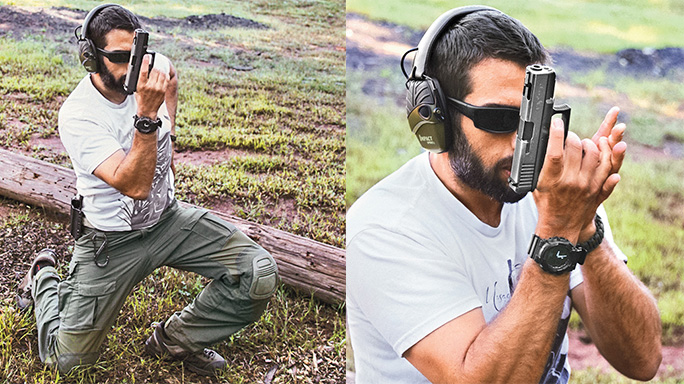 5 of 6
Masada Tactical: Top Training with the Israeli IDF
Lead Instructor Tzviel “BK” Blankchtein demonstrates Israel’s unconventional combat shooting method, which includes achieving a wide and stable stance, bringing the pistol to your face, racking the slide on the draw and fully extending your arms toward the target. Kneeling is emphasized for reloading. 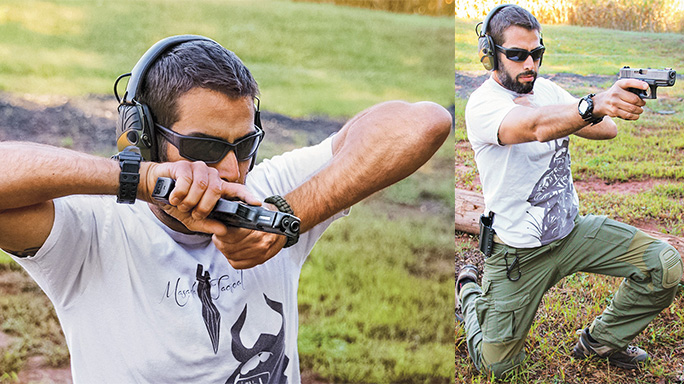 6 of 6
Masada Tactical: Top Training with the Israeli IDF
Lead Instructor Tzviel “BK” Blankchtein demonstrates Israel’s unconventional combat shooting method, which includes achieving a wide and stable stance, bringing the pistol to your face, racking the slide on the draw and fully extending your arms toward the target. Kneeling is emphasized for reloading. 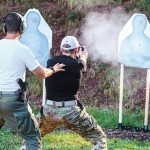 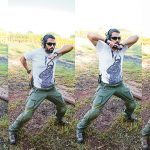 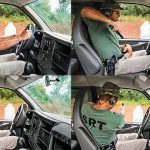 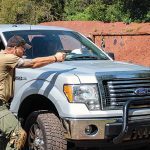 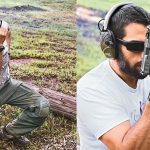 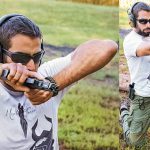 The real-world experiences of Israeli law enforcement and military personnel are vastly different than that of American soldiers and police. Likewise, the skills and tactics developed under fire and constant threat have been fine-tuned to deal with this divergent reality. The hard-earned success of the Israeli military and security forces is undeniable, and there is much to learn from their experiences.

That was the goal of Tzviel Blankchtein, or “BK” as he is more colloquially known, when he founded Masada Tactical in 2007. BK immigrated to the United States following a four-year stint, from 1993 to 1997, with the Israeli Defense Forces (IDF), and he remains an active IDF instructor. BK was also the lead defensive tactics instructor for the Maryland Police and Correctional Training Commissions from 2008 to 2012.

I recently attended a two-day “Tactical Urban Handgun” class for law enforcement officers held at Bollinger Gunsmithing & Sales in Taneytown, Maryland, taught by BK and other Masada Tactical instructors who were all IDF veterans. The Israeli combat shooting system serves as the basis for this course, and it is indeed far different than what most American law enforcement and civilian shooters are used to.

The first difference is that the IDF uses a point-shooting system with handguns. Based on videos of defensive shootings as well as shooter interviews, it quickly became very obvious that defensive shooters in the real world don’t use their sights—they just point and shoot. This happens even with highly trained professionals. In the IDF, those who are provided pistols are specialized operators who must undergo a five-week course. The goal was to develop a system in which beginners could quickly be trained to place hits in the center mass of a target without using their sights. The Israeli combat shooting system works just as well for experts, however.

It can be difficult at first for someone who has consistently trained on using their sights to stop looking at them. However, if you come to view the target as a legitimate threat, it gets a lot easier to become target focused and not use your sights. The key to accurate point shooting is to get your muzzle pointed at the target as you would point your finger. That part is easy. The hard part is doing it quickly, and here is where the Israeli system poses another major difference for American shooters and operators.

What the IDF developed is a drawing technique that avoids the upward swing of the arm in the American technique. When Americans draw, keeping the gun low and then pushing outward to full extension, the gun path follows an upward arc, and under stress it is easy to overextend and shoot high. The Israelis instead bring both hands to their face when they draw, with their elbows extended outward, the gun sideways, the gun hand to the cheek and the gun on top of the support hand.

From this position, both hands are extended straight towards the target, locking the hands into a firm two-handed grip as you reach full extension. With both eyes focused on the target, this technique brings the pistol straight forward with no arc or overcompensation. Point shooting’s effective distance is limited to about 7 yards, but since the vast majority of defensive encounters occur well within this distance, it is well suited for the task.

Historically, and to this day, Israelis carry handguns in Condition Two, with an empty chamber and a full magazine. They train to rack the slide on the draw. Once the pistol slide is under the chin, they use a thumb grip with the support hand to grab the slide and push the gun forward, chambering a round and firing one-handed. The historical reason for this is that the IDF was for a long time equipped with a wide array of handgun makes and models (mostly war surplus), and this technique simplified the training process and promoted safety.

Masada Tactical has modified its course for American Condition One carry, with a loaded chamber and a full mag. However, the pinching-the-slide technique is used for reloads. This is an adjustment for American shooters who have long become accustomed to the “cup” technique for operating the slide. The pinch technique is weaker and requires finer motor skills, but it does work well with the peculiar Israeli draw.

The entire process for engaging a target seems at first exaggerated and very choreographed. First, a shooter takes a wide-legged, squatting stance squared onto the threat with their back upright and shoulders back. The gun is then drawn with both hands coming to the face and elbows out. Finally, the gun is pushed forward, towards the target, while the arms rotate inward to prevent any movement off target and to secure a firm two-handed grip.

If there is more than one threat, the process must be completed again. First bring the gun and hands back to your face, then identify the second threat and take a step forward to square yourself in the same wide and low stance toward the new threat. Then engage by driving your hands forward. This system is certainly slower than simply swinging the gun towards the new threat, but it does avoid overcompensating and missing.

After engaging a threat and running empty, shooters are taught to move laterally and vertically, taking a knee to help avoid return fire. Of course, if actual cover is available, use it. Upon taking a knee, the pistol is brought back toward the face for a speed reload, keeping the target in focus the entire time. Once a new magazine is inserted, your elbows go back up, your gun hand goes to your cheek and your support hand pinches the slide. Push the pistol forward and re-engage any remaining threats one-handed. On the reload, threats are engaged one-handed for speed, and at the distances mentioned the decrease in accuracy is not material.

Another very important part of the training is support-hand techniques. This is something that few shooters ever practice. Despite hundreds of hours of firearms training, this was in fact my first time. Students trained on drawing their handgun with the support hand, rotating the grip for a firm support-hand hold and engaging one-handed. Officers using their duty retention holsters had a harder time with this than I did with my standard Safariland belt holster, but everyone managed, and the importance of this type of training was certainly highlighted, especially considering that an officer or CCW holder may be injured and unable to use their strong hand.

Next we trained on one-handed reloads using only the support hand. Students were taught to take a knee, place the empty pistol behind their knee, holding it there, and insert a fresh magazine. Then we would use rack the slide by forcing the rear sight against our belts or shoes, chambering a round before re-engaging the target. Needless to say, muzzle discipline and finger-off-the-trigger safety were extremely important.

The last thing you want to do in a gunfight is just stand there and, like American shooters, the IDF has several moving and shooting drills, with one big difference. The Israelis do not move and shoot at the same time; they do one or the other. Moving and shooting at the same time is a good way to miss a lot, they believe. So, instead, operators are taught to run towards the threat, stop, and then engage. This provides both faster movement and better accuracy.

In order to more closely simulate firing under stress, students were required to identify different targets before engaging and were subjected to physical challenges, including running, push-ups and having to reassemble a handgun and load before moving to engage a target.

Team and vehicle tactics were also part of the law enforcement version of this class, and they were mostly covered on day two. Communication between team members was essential, and each team of two shooters had to vocalize specific commands announcing when they were at slide lock (“Dry”), when they took a knee to reload (“Reload”) and when they were ready to stand back up (“Standing”). This last command was essential for safety, as the second team member may still be engaging their target. Only when the second team member gave the command (verbal and physical) to stand could the first team member do so.

Given how much time we tend to spend in and around vehicles, vehicle tactics are another essential aspect of this course. When driving as a team, the driver is in command and lets the passengers know of threats outside and if they need to evacuate the vehicle. We drove into shooting scenarios where targets were presented on both sides, and both the driver and passenger engaged. We also drove to targets on the driver’s side, and he engaged while the passenger exited. Once the passenger was out, and using the engine block for cover, he could engage and give the driver time to exit out the passenger side.

Of course, civilians and CCW holders don’t have much need for team tactics. The civilian class is one 8-hour day instead of two, and the vehicle training is limited to carjacking-type scenarios where the driver must engage a target.

This is not a classroom course. This is a hands-on range course, so come prepared. You will need a good holster and magazine pouch, at least three magazines and 500 to 700 rounds of ammo. 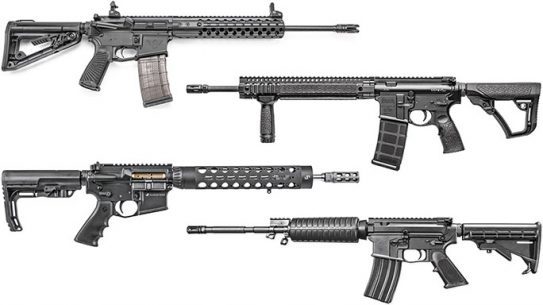 AR rifles seem to have gotten heavier and heavier over the years, but there...