by Tactical-Life
in Tactics & Training
0

0
SHARES
0
VIEWS
Share on FacebookShare on Twitter
Other MFR variants utilize other positions of the shooter’s choice.

Everything you have been taught about evaluating the quality of a big-game rifle is wrong. Every month, for roughly the past four decades, American hunters and shooters have been conditioned to believe that the only way to evaluate their hunting arms is to measure groups fired from the benchrest. Don’t believe me? Try to find an article evaluating any type of hunting arm that (1) doesn’t include benched groups and (2) offers any other kind of standardized test.

What is so wrong with this sort of evaluation? For starters, this is a test of mechanical precision and only relates to how well the firearm is capable of launching its bullet with minimal human influence. The multiple factors that make a field rifle great are largely ignored, such as how easily the hunter can harness the equipment’s potential in the field. Though there are rare exceptions, the fact is that a rifle’s raw precision doesn’t determine a hunt’s success or failure. Modern rifles and cartridges right off the dealer’s shelf (and by “modern” I mean almost everything manufactured by reputable makers over the past few decades) are so good now that their performance is almost never a concern for the big-game hunter.

No, I don’t work for any gun or ammunition manufacturers and I acknowledge that talented gunsmiths and handloaders can wring even better performance out of the machinery. Since the mid 1900s, back when factory gear wasn’t as precise, hard-won knowledge from benchrest competitors and gunsmiths has trickled down into off-the-shelf gear. Today, nearly any current, stock offering provides all the accuracy needed for most hunting situations.

Benchrest results are not an ideal standard, but unfortunately the gun and hunting communities haven’t caught up with this perspective. Volumes of test information have been recorded, and none of it has provided any real indication of how effective a given rifle will be in the field. Mechanical precision data is all that gets compiled when shooting from a benchrest. A review of the results of nearly any test will prove my point. At 100 yards the difference between the best group and the worst in a given rifle is rarely much more than an inch. Few hunters possess enough skill to take advantage of such a slim difference and would never notice it when taking a shot under field conditions.

The benchrest offers almost no benefit to a field shooter’s marksmanship. The basic tenet of marksmanship is to hold the gun the same way for each shot, and the best way to learn a consistent hold is to zero and practice in positions you’ll actually use in the field. The bench helps hold the gun steady and, with field rifles, is only useful for rank beginners and the feeble—people who don’t yet have the ability to hold a firearm consistently on their own. 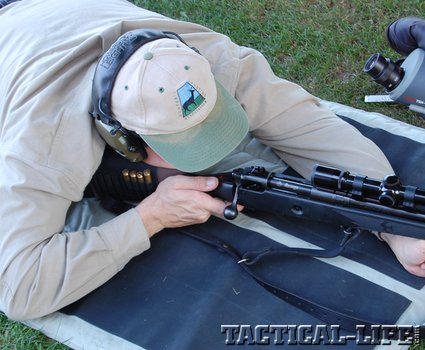 Most modern bolt-action rifles will shoot around 1.5 MOA straight from the manufacturer with randomly chosen factory ammo, sometimes better. “Inaccurate” slide-action rifles will shoot around 2 MOA. Once you’ve found a respectable load (a hunting handload or factory round that shoots close to MOA), you gain almost nothing by tweaking an extra couple tenths of an MOA.

Try this test. Take a sheet of quarter-inch graph paper and cut out one of the squares. Paste that tiny square to black construction paper, hang it up, and take 100 paces away. Turn around and look. At this distance the square represents about a quarter-MOA. Explain to me how improving your hunting rifle’s accuracy from 1.3 to 1 MOA makes any difference. We’re talking increments so small that you can’t even see them, much less hold rifle sights to under field conditions.

Hunters need to concern themselves with the overall package and how well they can shoot the rifle. Is the scope well positioned so you avoid cracking your skull about the eyebrow during recoil? Does the butt come naturally to the pocket when mounted? Does the trigger break cleanly? Can you run the action quickly? How well do you shoot it? These factors will determine field-shooting success, not tweaking an extra 0.3 MOA performance you can’t realistically use out of a rifle that probably will never be fired at live targets beyond 200 or 300 yards. We need a test that takes all these factors into account. 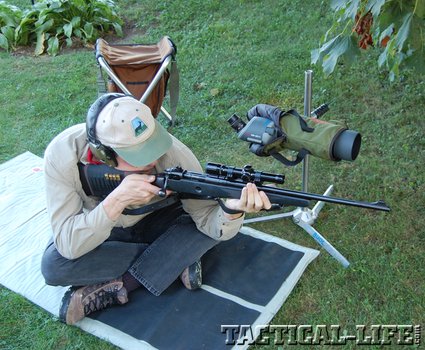 Instead of obsessing over bench results, lets look into the shootability of the entire rifle-ammo-shooter package. A more realistic and thorough test is the maximum field radius (MFR). When held consistently, firearms will tend to distribute shots in a roughly circular cone of fire. Shooting from position, from the center point of this circle the furthest distance (radius) represents the worst-case accuracy. To find your MFR, set up a target that is readily visible and has an easily determined center aim point at 100 yards. Regular bullseye targets work fine, and paper plates from the grocery store work well too. Scoring rings, if there are any, aren’t used in this exercise.

In Jeff Cooper’s version of the MFR test, loop the shooting sling on your arm and stand in a ready position as if carrying your rifle while walking afield. Set a shooting timer with a 10-second par time At the start signal, assume a sling-supported sitting position and fire two shots as accurately as you can within the 10-second time limit. Repeat the entire exercise four more times for a total of 10 rounds. When finished, clear the range and evaluate the target.

To score, determine the center of the group and measure the distance from that point to the shot farthest away. By Cooper’s standard, an MFR of 3 inches is very good and 2 inches is excellent. This virtually guarantees hits within 2 and 3 MOA from a realistic field position while under time pressure. Yes, that means a group that can be covered by a 6-inch circle is good. Before you scoff, consider that a 3-MFR shooter-gun-ammo combination will guarantee that the bullet lands within 3 inches (or less) of the intended point of impact every time, even when shooting fast.

This approach isn’t dependent on the specific point of impact, as the group center is located after shooting and the radius is found from there. This ignores where the zero and midrange trajectory happen to be, an advantage of simplicity for the shooter but something that needs to be accounted for. Also, even though sling-supported sitting is a great field-shooting position, there are others worth using. 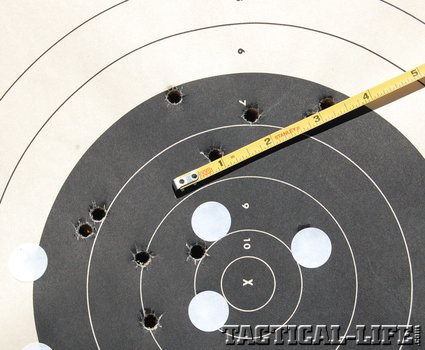 The basic Maximum Field Radius drill doesn’t require a specific target or scoring rings. Set up something easily visible at 100 yards, shoot for center, find the group center and measure to the widest shot. Per Jeff Cooper’s version, the MFR here was 3.25 inches.

A different MFR starts with the center radius point on the target predetermined. This doesn’t have to be the center of the target or aiming mark. For example, if you know your current zero hits 2.5 inches high at 100 yards and you want to aim target center, mark your target to take this into account. Begin from standing up, but adopt a different position for each string. The position can be anything you like provided that it can be used while hunting and only uses support equipment that the hunter actually carries or has on the rifle. To make this MFR test work for single-shot actions, dispense with the follow-up round. Using a predetermined center tests the zero, and shooting from different positions factors in any point-of-impact shifts. Scoring works the same.

A more advanced MFR exercise incorporates shot placement and target angle on big game. Set three big-game targets at 100 yards, with each one placed at three different angles such as quartering towards, quartering away and broadside. Determine and mark the ideal point of impact on each target, which will be different because of the angle. For example, a quartering-toward target angle should have the shot hitting farther forward than broadside. Using your choice of the MFR drills above, fire two rounds on each target. You can use Cooper’s version and fire three strings with a pair of shots from sitting on each target, or shoot six individual shots and mix up the shooting positions. Measure the distance from a predetermined center of each of the shots and take the farthest shot as the final score. In addition to the shooting requirements of the other MFR exercises, a good score here also requires the ability to find the proper aim point at three different target angles and knowledge of your mid-range trajectory. 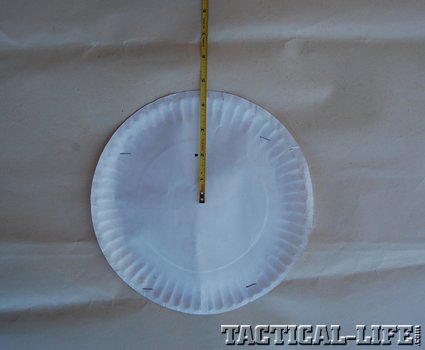 These MFR tests take the whole shooter-rifle-ammo combination into consideration, but therein lies the disadvantage: A poor MFR could be caused by a number of problems. What I like to call the “Marksman’s Law,” a corollary of Murphy’s, states that marksmanship problems are generally the shooter’s fault, but not always, as the MFR tests a whole lot more than mechanical precision. The MFR also provides a much-needed reality check. When a hunter possesses a rifle capable of shooting MOA groups off the bench but can’t shoot an MFR within the vitals, we know the problem doesn’t lie with the rifle. MFR drills, along with maximum distance drills, should form the core of a field marksman’s range practice. Hunters, not rifles, secure hits.