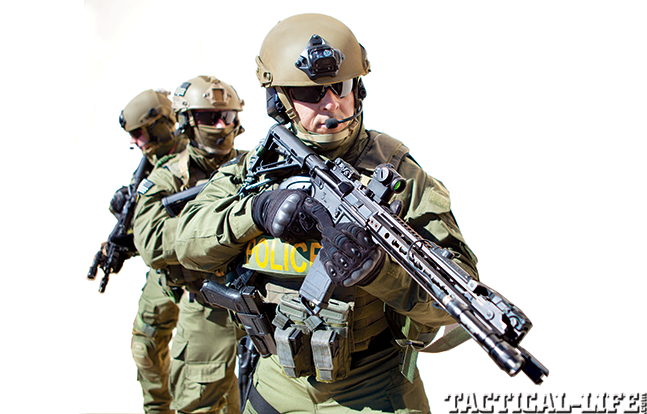 The 21st century has provided many watershed moments for law enforcement agencies and officers, and how we operate. Changing and dangerous times have caused us to have to adapt our tactics and obtain new equipment, which better allows us to deal with these changing conditions.

Of late, an issue has arisen that has caused concern, and understandably so, among some civilians who are otherwise firm and ardent supports of law enforcement. They are concerned about the changes that have been occurring in the way we conduct various operations, as well as changes in the equipment we bring to bear on situations that are handled by day-to-day patrol units. However, I would like to try to give them some perspective on this if I could.

Learning From The Past

The use of military-proven equipment and arms by law enforcement agencies is nothing new. Hanging in the hallway of the Columbus, Ohio, Police Academy is a photograph from the Prohibition era. It shows an open-top roadster occupied by four Columbus police officers. The passenger officer is indeed riding shotgun—armed with a 12-gauge Winchester 1897 Trench Gun (a military weapon). But the real attention-getters are the two officers in the rear. They are both armed with Browning BARs! Imagine patrolling or going on raids today with that magnificent, 23-pound, fully automatic arm chambered in .30-06 caliber and loaded with FMJ loads—especially in an urban area! It was truly a time of need for the cops of that era when facing the heavily armed and desperate crooks of the time, and as the need arose officers upgraded their weapons to deal with the threat.

After WWII, a large number of surplus weapons ended up in police armories. For many years, the Ohio Highway Patrol had Thompson submachine guns available in their armories (although they weren’t deployed on the road). During my employ at the Reynoldsburg, Ohio, Police Department, there were two M1 Carbines and two Winchester Model 12 shotguns in our armory that the department had obtained. At the same time, surplus M1 Carbines were the standard entry weapon of the Columbus Police SWAT team. The use of military-proven weapons by civilian law enforcement officers and agencies is nothing new.

Those who are concerned about the use of semi-automatic AR-15s in place of the traditional 12-gauge pump action have fears that are understandable at first glance. Law enforcement agencies need to explain to those they serve that the reason the AR is deployed more often than the shotgun involves increased safety—for officers, crime victims and innocent bystanders. Sending one single, precise projectile downrange that has a low ricochet and over-penetration potential can be better than sending nine to 24 shotgun pellets downrange with a higher ricochet and dispersion potential.

Sometimes we are our own worst enemies when we don’t take the time to explain our actions to the public, or take the time to quash misinformation, assuming the public understands why we do what we do. It is important to remember what Sir Robert Peel, the founder of the London Metropolitan Police, said nearly 200 years ago, “The police are the public, and the public are the police.” As long as we strive to keep those words in mind, we can help keep the public’s attitude towards us positive.

ABOUT THE AUTHOR: Scott Wagner is a 34-year law enforcement veteran having worked in undercover, patrol, SWAT and sniper roles as well as on training assignments. A certified police firearms and defensive tactics instructor since 1986, he is a full-time criminal justice professor and police academy commander. He currently serves as a reserve sergeant with the Village of Baltimore, Ohio, Police Department.