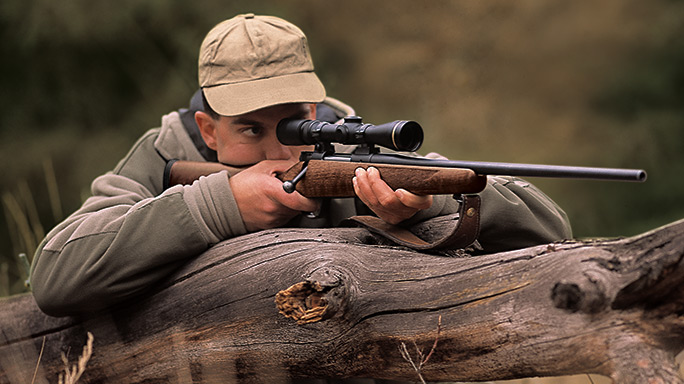 1 of 3
Photo by Kimber
Monster Moose Medicine: Tips to Tackle Big Game
It doesn’t really matter what caliber you use for moose as long as you shoot at least a 200-grain bullet. 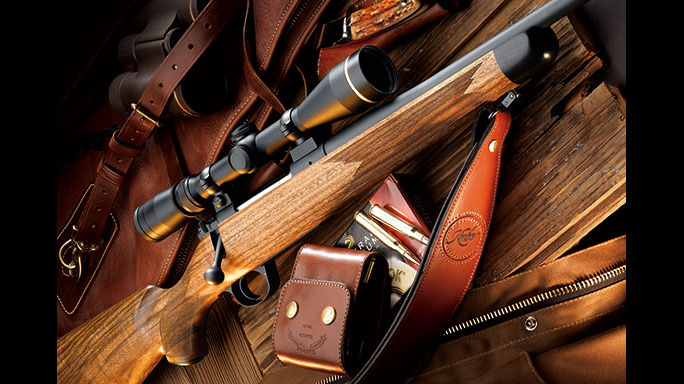 2 of 3
Photo by Kimber
Monster Moose Medicine: Tips to Tackle Big Game
According to Jim Hammill from Crystal Falls, Michigan, the Kimber Model 84 allowed for a clean kill on a 1,000-pound bull. 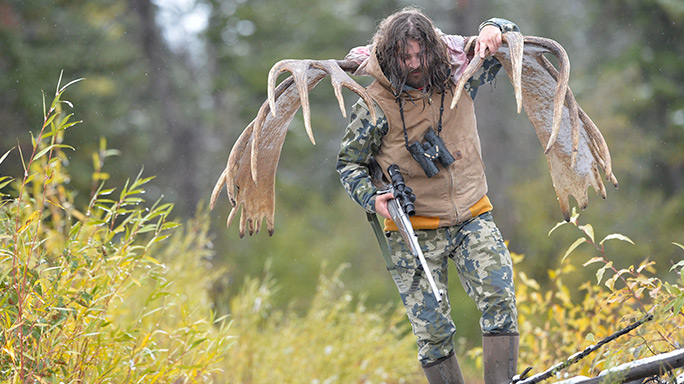 3 of 3
Monster Moose Medicine: Tips to Tackle Big Game
Hunters use a variety of calibers to bag moose, from the .338 Federal to classic magnums like the .300 Win Mag and 7mm Rem Mag. 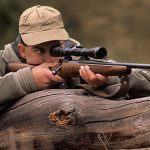 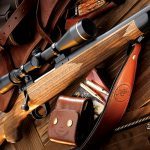 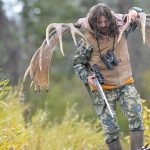 Veteran moose hunter Dean Domich from Hawk Junction, Ontario, swears by his 7mm Mag loaded with 175-grain Remington factory ammunition for dropping big bulls. Besides anchoring plenty of moose for him over the years that rifle and load proved that they have enough firepower to get the job done by saving him from a close call with one particular bull.

Dean was hunting with his wife, Guylaine, and a friend 5 miles back in the bush at the time. They saw a big bull go up a ridge in the distance. When they reached the ridge, they split up to increase their chances of getting a shot at the bruiser. Dean went up the front of the ridge, taking the same course the bull had, while his wife and friend went up the side 200 yards away.

“I just grunted once like another bull to try to get a fix on where the bull was,” Dean said. “Then I saw him turn and come toward me. When the bull was 55 feet away, I put the crosshairs on him and confidently squeezed the trigger.

“But when I fired, the bull just stood there. I fell the day before, and I must have gotten something in the muzzle of my rifle. The bullet must have disintegrated before it got to him. My first shot just pissed him off.

“As the bull continued toward me, I tried to work the bolt to put another round in the chamber, but I couldn’t lift the bolt. The fired case must have swelled from the backpressure. I frantically took my Buck Knife out and used the handle to pound on the bolt to try to get it open.

“Every time I hit the bolt with the knife handle,” Dean continued, “the bull would swing his head threateningly. I finally got the bolt open and another shell in the chamber when the bull was almost on top of me. I didn’t have time to shoulder the rifle, so I shot from the hip, hitting the bull in the center of the brisket. As soon as the bullet connected, the bull’s hind legs came out from under him and he started to fall. I jumped out of the way as the bull fell to avoid getting hit.”

Guylaine and their friend watched the drama unfold, but couldn’t shoot because Dean was too close to the moose. The bull had an estimated weight of 1,100 pounds and his antlers had a 55.5-inch spread. The palms of the antlers had a number of fresh nicks or scratches in them that may have been from fragments of the bullet from Dean’s first shot.

With 175-grain bullets, the 7mm Rem Mag is obviously a good choice for moose hunting, but there are other options. A .30-06 with 180-grain loads would be comparable, and fans of heavy bullets could even use 220-grain ammunition. Maria Crowner from Grand Ledge, Michigan, bagged a trophy Saskatchewan bull during late September one year with 180-grain Nosler Partition bullets out of her .30-06 while hunting with Brian and Shelly MacDonald out of their Lone Wolf Camp. Crowner’s bull is a perfect example illustrating that multiple shots are sometimes required to put these giants down for good.

Brian called a huge bull in that had 54-inch antlers, and Maria put two bullets through its chest at 200 yards, one of which nicked the heart. The bull went down, but when they reached where it was, it got up again, and several more rounds were required to put it down for keeps.

Another caliber that is an excellent choice for moose hunting is the .338 Federal with 180-grain bullets. Jim Hammill from Crystal Falls, Michigan, used a 180-grain Nosler AccuBond bullet out of his .338 to collect his first bull in British Columbia during the fall of 2012, and he was extremely satisfied with their performance.

“The .338 hasn’t really caught on well,” Hammill said, “mostly because hunters seem to be ‘magnumized’ and think they need giant calibers that kill on both ends of the gun to take animals like moose. The recoil on my .338 is moderate and the rifle is light, too, making it easy to handle and shoot.”

Jim said his Kimber Model 84 with a Leupold 2.5-8x scope weighs a hair over 6 pounds. The combination made a clean kill on a 1,000-pound bull at a distance of 260 yards. Hammill got his moose on the second day of his hunt with Itcha Mountain Outfitters from Quesnel, British Columbia. They were only 15 minutes from camp when the guide spotted the moose a quarter-mile away and they closed the distance for a shot.

“The bull first presented a shot with a strong quartering-on angle at just over 250 yards,” Hammill related, “and the guide advised me to take the shot. I wasn’t comfortable with the shot due to the position of the animal, and I was still breathing hard from the quick walk we made to close the distance on the bull. But I followed the guide’s advice and took a shot from a kneeling position that missed.

“As the bull moved, I repositioned myself, and when the animal stopped angling away at 260 yards, I was more confident with that opportunity. When I squeezed the trigger that time, the bull dropped in his tracks. The 180-grain Nosler bullet entered the center of the ribcage, taking out the lung on that side and then angled upward into the spine.” Mark Hanna from Faithorn, Michigan, has taken a half-dozen bulls over the years, including a monster he bagged during the fall of 2010 in Manitoba that was one of the largest Canadian moose taken that year. The bull’s antlers scored 210 using the Boone & Crockett scoring system, and the animal weighed well over 1,000 pounds. The antlers were 57 inches wide.

He and his buddy encountered a pair of bulls that were fighting when they were 10 minutes from camp, and they each shot one of the bulls. The second bull had 50-inch antlers.

This year, Mark plans on using a .375 with 350-grain bullets on his moose hunt. He originally got that rifle for a grizzly bear hunt, but that fell through, so he decided to take a moose with it instead. Moose are so big that it is difficult to be “overgunned.”

“It seems like everyone has a different-caliber rifle up there in Canada,” Hanna said. “It doesn’t really matter what caliber you use for moose as long as you shoot at least a 200-grain bullet. Most of the guides use .45-70s with 300-grain bullets because most of the shots are close.”

Any of the .300 Mags are good moose medicine with at least 180-grain bullets for hunters who can shoot them accurately. Lois Olmstead from Arnold, Michigan, claimed a record book Alaskan moose with 75.5-inch antlers one year during early September while hunting with outfitter Max Schwab out of Talkeetna. The widest antlers any of the moose Max’s clients had taken previously were 67 inches.

Lois was hunting with her husband, Don, but he got sick during the trip, so Lois went to a spike camp with her guide, Mike Van Bebber, while her husband stayed at the main camp. Olmstead and her guide hunted for moose from mules the following day. They followed moose trails during the search. After about 2.5 hours of riding, Van Bebber said, “There they are,” as he spotted a group of moose in the distance that included three bulls and seven cows.

“We rode the mules another hour to get closer to the moose,” Olmstead said. ”Then we walked at least a half hour to get in position for a shot. It was tough walking. I’m not sure I could have walked much farther. There’s no way humanly possible I would have been able to cover that terrain without a guide and mules. Walking in that country is a young person’s game.”

The hunter and guide got to within 50 yards of the biggest bull, and then the guide confirmed it was a legal animal. In the area they were hunting, bulls must have a 50-inch antler spread or three brow tines on one side to be legal. Three brow tines were obvious on one side, so the guide gave Lois the okay to shoot.

“I shot from one knee, aiming behind the bull’s shoulder as he stood broadside,” Olmstead said. ”I was perfectly calm until after I shot, then my knees started shaking. That was the first moose I had ever seen in my life.”

One 180-grain Federal Premium Safari bullet from her .300 Win Mag was all it took to drop the enormous bull. The guide estimated the moose’s weight at 1,500 to 1,600 pounds. 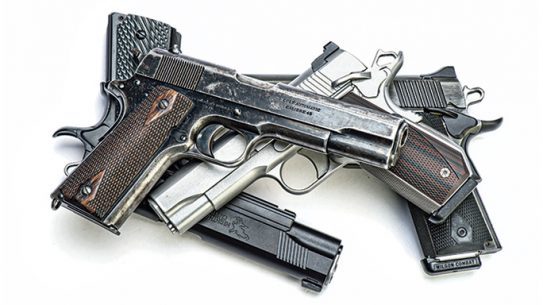 16 Important Questions & Answers About the 1911 Handgun